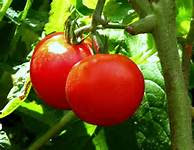 So, this will be the very last entry about tomatoes and it’s more of a “Did you Know?” than anything else.

The Latin botanical name, Lycopersicon esculentum, translates to “wolfpeach”.  Named by French botanist Joseph Pitton de Tournefort because of the peach-like shape and the fact it was poisonous - a reference to the third century writings of Galen concerning “a poison in a palatable package which was used to destroy wolves”.

According to Germanic folk tales, wolfpfirsich (wolfpeach) was used to call up werewolves.  I’m not sure exactly why you’d want to call up a werewolf though.

Tomatoes, a native of Central and South America, were discovered by the conquistador, Cortez, growing in Montezuma’s gardens.  He brought seeds back to Spain in 1519 (along with chocolate and turkeys).

They are a member of the Solanaceae (nightshade) family, the most deadly plant being Belladonna.  However, not only tomatoes are a part of this family, so are potatoes, eggplant, peppers, and tobacco.  Only the eggplant was familiar to 16th century Europe.  The rest came from the New World and were suspect.

Originally, in Europe and later Colonial America, they were planted as ornamental curiosities, but not eaten.

The French referred to the tomato as pommes d'amour, or love apples, as they thought them to have stimulating aphrodisiacal properties.

“Just to seal the tomato’s fate, all parts of the plant, with the exception of its fruit, actually are poisonous.”  Something I’ve never heard so I did some research.
“…While it’s true that tomatoes are members of the nightshade family, they actually produce a slightly different alkaloid called tomatine. Tomatine is also toxic but less so. It is highest in concentration in the leaves, stems and unripe fruit; ripe red tomatoes have very low doses of tomatine. Leaves and green fruit ingested in extremely large doses may cause gastrointestinal problems. This doesn’t mean that you should avoid fried green tomatoes as it would take a cart load amount of tomatine to make a person ill.”

Today, tomatoes are touted as extremely healthy food sources in large part due to their high concentration of lycopene, an antioxidant that has been shown to reduce the risk of cancer, cardiovascular disease and macular degeneration.

“As far as the toxicity of tomatoes with regards to dogs, again, very large amounts need to be ingested. Tomato leaves have a distinct, pungent aroma and are also covered with prickly hairs which make them less than palatable to most dogs.”

Of course, the tomatoes themselves are very appealing to a variety of other critters – squirrels, raccoons, possums and birds. 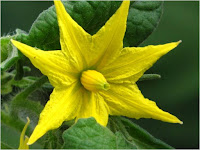