So, I mentioned we always had Angel Food Cake on Christmas Eve.  Do you realize what a pain this cake is to make??? 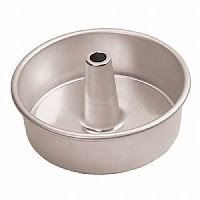 First of all, it requires 12 (Twelve) egg whites (and I never knew what Mother did with all the yolks), a lot of sugar, a little flour and other stuff.  Then it gets put in a special pan.  (I have one – I’ll bet I’ve used it, oh - maybe 4 times in the past 40-odd years and never to make angel food cake.)  Baked and inverted onto a coke bottle to cool.  (Having never made one, I have no answers to your questions.) 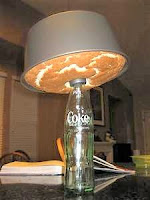 Once removed from the pan, it’s time for the 7-minute cooked white frosting (that’s actually like meringue candy).  As far as I’m concerned, that frosting is equally a pain in the patootie to make.  But, I will say, it does turn out pretty on a cake – shiny, thick, making all sorts of peaks.  Doesn’t taste like anything but sugar, but it is pretty. 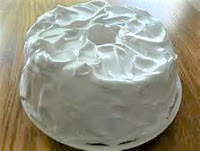 Next is slicing the cake.  You don’t just take a standard dinner knife and slice.  It’s a deal.  Each female in the family (myself, my sister, both my daughters, my sister-in-law – though she swears she never had that particular joy) were all taught the proper way to cut THE angel food cake.

So, first of all, you need special tools – a narrow, thin, serrated knife and a tool designed specifically for cutting angel food cake (sort of a large metal fork mounted on a handle).

You know, there are things you learn that you never forget – riding a bicycle, swimming, driving a car and cutting angel food cake.  Wiggle the large fork top down into the cake to the plate, point down, gently, using a sawing motion, cut the cake with the knife, remove the fork and put in in the slice made and repeat with the knife, lay the slice of cake on the fork and put it on the plate.

I was never tasked with the responsibility of making the Christmas cake after Mother stopped.  That little job and recipe was given to my youngest daughter --- I don’t think she’s ever made it either. 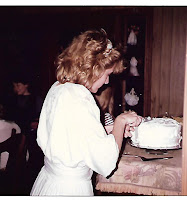 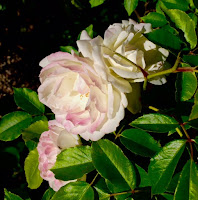