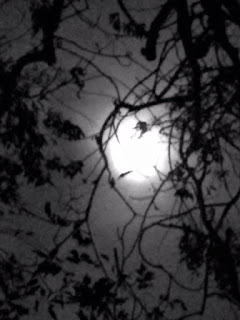 I wonder sometimes when our moon, which is a very old soul, started being called just The Moon.  And, why it never got a super cool name like Ananke (Juipter) or Jarnsaxa (Saturn) or Charon (Pluto).  Probably because we only have one, while those others have a bunch.   Still .......

The Moon has many a legend too –

Full moons make you crazy.  Probably not – at least not any crazier that you are the rest of the time.  However, in 18th-century England, people on trial for murder could campaign for a lighter sentence on grounds of lunacy if the crime occurred under a full moon.

Aliens inhabit the moon.  Doubtful.  Although the 1820 Bavarian astronomer, Franz von Paula Gruithuisen claimed to have glimpsed entire cities on the moon with his telescope. He wrote that the “lunarians” who lived there had built sophisticated buildings, roads and forts.  Who knows, maybe he saw things no one else did or has.

The moon is a hollow spacecraft.  Perhaps, though probably only in the imagination of science fiction writers, including H.G. Wells and his book “The First Men in the Moon,” which takes place inside a hollow moon inhabited by aliens.

A rabbit dwells on the moon.  Maybe.  Seems there are legends from different cultures, including Buddhism and Native American folklore, that recount the tale of a rabbit that lives on the moon.

A halo around the moon means bad weather is coming.  Probably.  Halos are a sign of high cirrus clouds drifting 20,000 or so feet above us. The halos are caused by refraction (splitting of light) and reflection (glints of light) from the ice crystals within the clouds.

I like this one -- The first time you see a crescent moon for the month, take all your spare coins out of your pocket, and put them in the other pocket. This will ensure good luck for the next month.  You just never know what works!