Yesterday I planned to put up a “Did You Know?” post.  Had the outline all put together, just had to fill in with comments and pictures.  Obviously – that didn’t happen.  My vision has been acting up lately and being on the computer longer than an hour causes all sorts of problems.  So, I went to my ophthalmologist.  Turns out – my eyeballs are all healthy (yay!) but, my eyes are not focusing in tandem which makes my eyes very tired and vision out of focus.  Another of those “it happens as we get older” things.  Ugh.  And, by the time I got home from the DR, my eyes were so dilated, seeing anything was difficult to “not happening”.  Anyway, getting new glasses.

First of all.  The big thing about today is 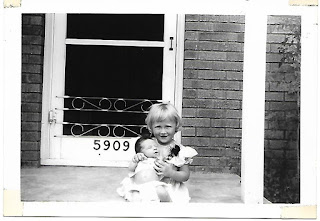 Poem in Your Pocket Day

You could celebrate by:

1 Read a poem out loud from your porch, window, backyard or outdoor space and/or

3 Email a poem to your friends, family, neighbors, or local government leaders

Put Something In
Draw a crazy picture,
Write a nutty poem”
Sing a mumble-gumble song,
Whistle through your comb.
Do a loony-goony dance
‘Cross the kitchen floor,
Put something silly in the world
That ain’t been there before.
A Light in the Attic by Shel Silverstein 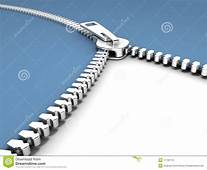 The first patented zipper with a slider, filed in 1891, was designed by American Whitcomb Judson and it was called a ‘clasp locker’, and originally invented for use on shoes.  However, it didn’t work well and never caught on.

Then, in 1913, American scientist and inventor Gideon Sundback received a patent for a curious contraption he called “hook-less fastener” and thanks to the military, this contraption caught on quickly.

There are 4.5 billion zippers of all kinds used in the U.S. per year.

A zipper is also known as a zip fastener or a zip and fly.

Zippers might seem innocent enough but 1,700 men seek help in the ER each year due to zipper related injuries.

I think my cat Daryl can teleport. 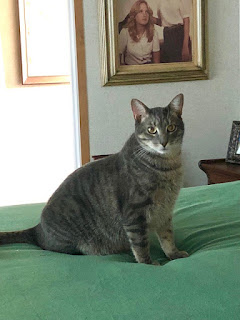 Honest to god, he can be 6 feet across the room and the minute I open any door anywhere in the house he can be through it and someplace I don’t want him to be. 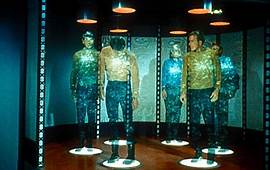 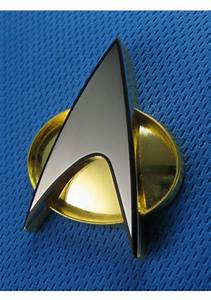 He has figured out how to get out the door without being seen (fortunately, once out he rolls onto his back and looks cute possibly so I won’t throttle him).  And, how to get into a cabinet without making any noise until he starts bumping into things. 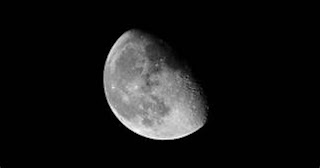 Currently the moon is waning gibbous.  Which means - this phase starts after the Full Moon and lasts until half of the Moon's face remains lit-up at the Third Quarter (May 3).  Things to do now?  Traditionally banishing spells are the best magic to do at the waning gibbous moon.  Another traditionally done thing – clean house, home, and anything else.  Also it’s time to plant biennial and perennial flowers, and vegetables that bear crops below ground (such as onions, carrots, and potatoes).

And, lastly, I was awakened early this morning by thunder, lightning, and RAIN.  Not, the pitter-patter of raindrops but a deluge of water falling from the sky.  My rain gauge broke during the IRON WINTER OF 2021 so I don’t know how much rain we've gotten so far, but at 9AM, the very deep ditch looks like this – 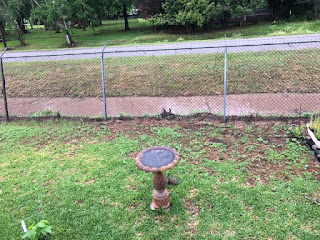 When I looked out in the wee early hours this morning, this is the sight that greeted me. 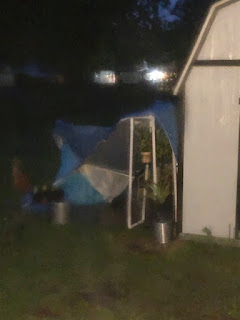 I’m okay, okey-dokey, just fine, breathing and everything.  Not running screaming down the street. 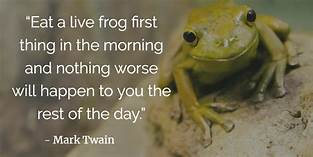 Thinking that’s what I had for breakfast!