How Does Your Garden Grow? With …..


My brother and his wife called me the other day – they were wearing long sleeves because it was in the 60-somethings temperature wise.  Sigh.  I was wearing tank top and shorts because it was in the 90-somethings with 90% humidity.  Obviously, they don’t live anywhere close to me.  They live in the wilds of Washington.  He always tells me though, they do have summer with temperatures in the upper 80’s to low 90’s – it just doesn’t start until after July 4 and ends a few weeks later.  This year he and Cathi sent me various pictures of spring at their house – blooming plants, many of which I can’t grow here …… well maybe can’t.

This is a Camas Lily (Camassia) and is a member of the lily family. 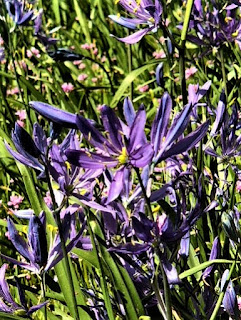 (Did You Know fact – many experts classify Camas Lily in the asparagus family. And that’s because asparagus was also classified in the Lily Family, however it’s now Asparagaceae – no longer the same.  Don’t know why – somebody needed something to do is my guess.) 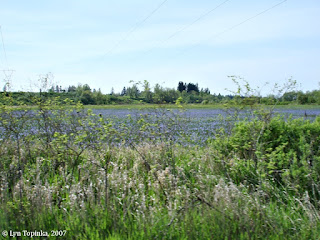 "... our camp is agreeable  ….. the quawmash is now in blume at a Short distance it resemhles a lake of fine clear water, So complete is this deseption that on first Sight I could have Sworn it was water. ..." [Merriweather Clark, June 12, 1806]

One of the interesting things (and this is, oh goodie, another Did You Know thing) – they are edible.  So, if you are lost in the wilds of the northlands, starving, and come across these beautiful blue plants, you can harvest and safely eat the bulb.  Usually harvested in the fall after the flowers withered, the native peoples would pit roast or boil the bulb which looks and tastes similar to a sweet potato.  Now, I know, if you’re starving, lost in the wilderness, this might not be of great importance but eating too many of them can cause excessive flatulence.

Warning: Death camas (Zigadenus venenosus) can be confused with edible camas bulbs and is toxic. Be sure of your identification of camas bulbs before eating them!

So far, I can’t find anything that tells me the Camas Lily won’t grow here but I suspect the bulb needs more cold hours than we normally have, meaning while the bulb might survive, it probably wouldn’t bloom.

OK – I can’t grow Trillium.  It doesn’t like our heat or humidity.  Fine. I researched and wrote about Trillium back in April.  I accept I cannot grow them successfully here.  Doesn’t make me happy but sometimes you just have to move on. 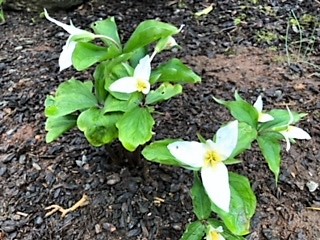 Then, they sent me a series of pictures ……. 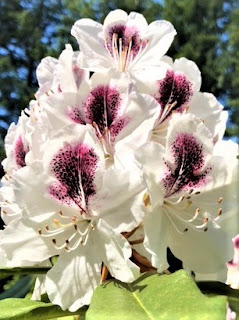 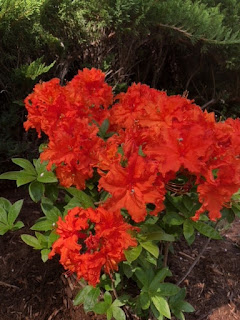 The name Rhododendron comes from the greek words "rodon" which means "rose" and "dendron" which means "tree", hence Rose Tree. And how cool is that!  And, yes, they are related to the azaleas we grow here, however while all azaleas are Rhododendrons (note the capital R), but not all rhododendrons are azaleas.  If you want to know more, and it’s very confusing, may the gods and google help you. 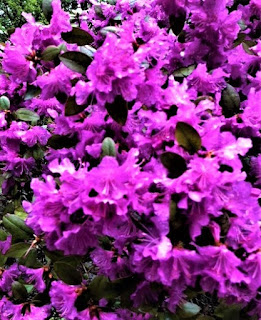 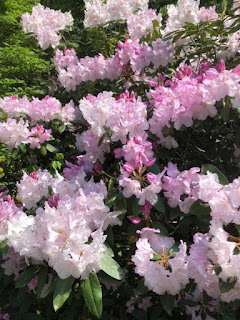 Rhodies are native to the Americas and actually grow in places like Southern California, Arizona, New Mexico, and Texas!  Oh yeah – also in Washington.  In addition to being close cousins to azaleas, they are also related to heathers, mountain laurels, blueberries and cranberries, manzanita, huckleberry, sourwood, and a bunch of other things.  They are regarded as the best flowering evergreen plant for landscaping.  While it is a bush, Rhododendrons can grow up to 80 feet tall!  Believe it or no – it is considered an under story plant.  So, if you plant one here, it will do best in filtered bright light.  Otherwise I expect our sun will fry it in short order.

One other thing – all parts of Rhododendrons are dangerous.  Eating them can produce stomach irritation, abdominal pain, abnormal heart rate and rhythm, convulsion, coma, and death.  Never good.

Last but not least, they sent me this picture.  Thunbergia, also called Black-Eyed Susan Vine, will grow here (and I have already ordered seeds for next spring). 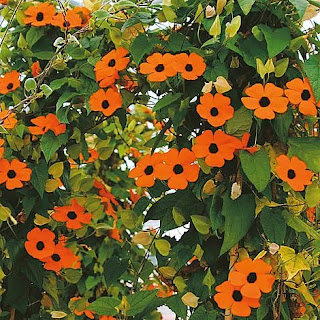 Native to Eastern Africa, this climber has become naturalized all over the world. It produces an attractive, bunch of daisy-like flowers in colors of orange, pale yellow and white.  It can grow on a trellis, fence, or in a hanging container.  Here it’s considered a perennial and can grow upwards of 20 feet.  In some areas, gardeners will allow the vines to crawl all over the ground – as a ground cover.  Hmmmmm – I like that better than the idea of grass.  Plus, flowers and no mowing – bonus!

While full sun is recommended, in hot climates (and that has to include us here) growing in morning sun/afternoon shade is best.

Its closest cousins may be things you’ve already grown like Skyflower Vine or Orange Trumpet Vine.  When I plant mine next spring, I’m going to grow them on an arch with the Star Jasmine or maybe on my gazebo with the wisteria.  Flowers in the spring and all summer.  How good is that! 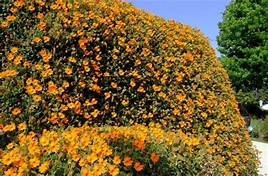