I walked around the neighborhood yesterday.  All the magnolia trees are in bloom.  And, they are just beautiful.  Plus, they are very fragrant so the air smells nice.  Mostly these are the native evergreen Magnolia grandiflora, the classic southern magnolia.

I’ve had these trees at just about every house I’ve owned.  Well, not in Arizona – it’s really dry there and magnolia trees do best in a moist location.  I don’t have one at my current house because I just don’t have a place large enough that gets all-day sun.  My yard is full of pecan trees or overhung by neighbors’ oak trees. 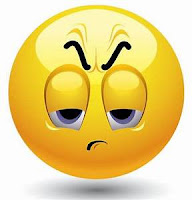 But, if you are looking for an ornamental tree that tolerates our humidity and heat and occasional cold spell, this is the tree for you.   Oh – one other thing – our magnolia trees grow slowly.  And, may not bloom until they are 10 or so years old.  Every tree I’ve planted in the past (with the exception of the one I grew from seed), has been at least 6 feet tall and has bloomed within a year or two after established (maybe 2 years after being planted).  And, yes, I grew one from seed and planted it in the ground after 2 years in a pot.  When I moved from that house 6 years later, it was about 3 feet tall and had not bloomed.  Just to sort of put age and size in prospective.  The biggest thing about planting teenaged trees – keep them well watered until they are well established.

There are all sorts of magnolia trees to choose from.  My sister-in-law sent me this picture yesterday of their Star Magnolia.  This is a small tree or can be grown as a large shrub.  It’s considered small because it only grows to 20 feet.  It is cold-hardy and heat-tolerant.  Works for them – would work for us! 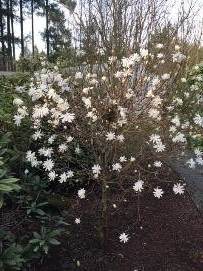 Our evergreen Southern magnolias have large glossy leaves and fragrant flowers.  All the various ones I’ve had, drove Michael crazy because (1) they will drop leaves all year long but specially in the spring; (2) the leaves don’t mulch down unless you chop them up; (3) the leaves don’t slip gracefully under the mower to be chopped up, you have to chase them around or rake them up; (4) all of them have insisted on having branches to the ground – which he promptly cut off; and (5) grass would not grow under them because they produce dense shade and all manner of roots.  These are good sized trees and can top out at 80 feet tall and 40 feet wide! 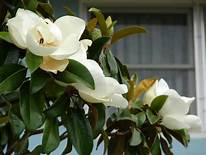 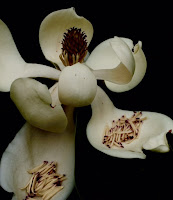 I’ve also had a deciduous magnolia I’ve always called a Tulip Tree – that’s what my father called it. This group is also called Saucer magnolia because of the shape and bright color of their flowers.  Mostly I’m familiar with the pink flower variety but I have seen pictures of two others one white, one yellow.  They don’t like heavy wind or salt spray and can be prone to late frost damage which might discourage any flowers.  But here the flowers pop out in February or March, long before the leaves come on, heralding the arrival of spring. 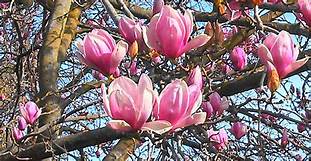 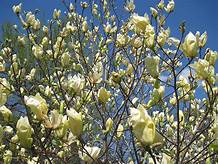 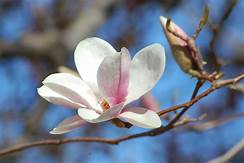 Now, this is one I’ve heard of but don’t think I realized is a magnolia - A Cucumber Tree.  This variety of magnolia has very large leaves and is generally grown as shade trees.  It does produce a pretty yellow flower that blooms in the summer and a cucumber shaped fruit in the fall.  It’s very hardy and can get 80 to 100 feet tall. 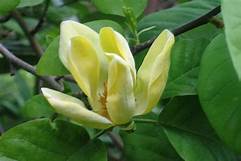 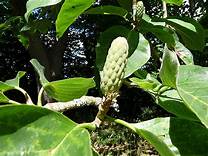 So, no matter where you are – it’s time to enjoy the magnolias, y’all. 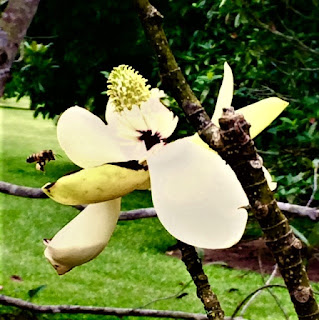