I had every intention of publishing this on World Book Day, April 23.  However, one of the drawbacks to being retired is – I never know what day of the week (much less the date itself) it is.  I was thinking today is the 23rd.  It’s not.  Ah well.  So, I’m pretending, for a while, that today is 23 April so …….World Book Day is to celebrate reading – no matter what form it may take – hard books, digital books or audio books.  It’s all reading!  Over the past months I’ve read several new books and thought to share … 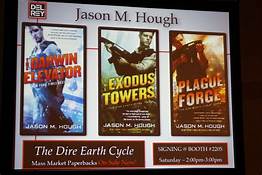 Dire Earth Cycle  by Jason M. Hough
The series takes place in 23rd century Earth. So, a quick prequel - An empty space vessel piloted by “The Builders”, arrives in Earth’s atmosphere. It is accompanied by another ship which constructs the cord of a space elevator anchored in Darwin, Australia.  One man, Neil Platz, having discovered the first vessel in orbit, works out the future location of the elevator and establishes Platz Industries to exploit it by buying the land where it will anchor, building the elevator base and climber infrastructure in Darwin, and eventually establishing orbital colonies along the elevator cord. For a time, Darwin thrives as it becomes the center of the world.  However, a plague has afflicted most of the earth’s humans.  This plague either kills people out right or turns them into insane killers unable to think, speak, or reason.  The rest of the population is made up of the rare “immunes” or those that managed to get to the safety of Darwin’s aura protected safe zone around the space elevator.

Book 1: The Darwin Elevator
The hero, Captain Skyler Luiken, an immune, leads a team of immune scavengers who can survive outside the aura where they battle sub-humans while collecting items of value necessary for day-to-day existence. Unfortunately, Skyler and his crew become entangled in the political plots and power games of those that control or seek to control the space elevator.  Book one ends as another “Builder” ship establishes itself in South America and Skyler and others make their way towards it.

Book 2: The Exodus Towers
A colony has been built around the new space elevator in Brazil, but things are far from over. There is now a new group of plague-infected humans who have been enhanced by strange alien technology.  Back in Darwin, there has been a hostile take-over by a religious cult that is moving on to Brazil to take over there also.

Book 3: The Plague Forge
In the third book Skyler and his crew must try to find a set of strange keys left behind by the aliens, in order to figure out what is the goal of the aliens, and why they have done all that they did?
It was really hard to give a brief description of these three books because so much happens non-stop.  It’s really good though. 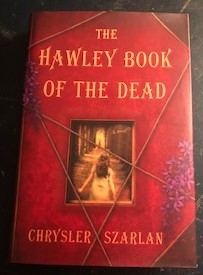 Hawley Book of the Dead  by Chrysler Szarlan
Revelation “Reve” Dyer grew up listening to her grandmother’s family stories about ancestors who founded the town of Hawley Five Corners in Massachusetts. Their history is steeped in secrets known by only a very few outsiders.   An ancient magic runs in the Dyer women’s blood.  Reve and her husband are world-famous Las Vegas illusionists. They have three daughters, a beautiful home, and what seems like a charmed life. But Reve’s world is shattered when her husband is murdered onstage.  Fearing for her and her daughters’ lives, they leave for the place she has always felt safest, a farmhouse in the forest of Hawley Five Corners.  There Reve searches for answers to what has happened and why it has happened to her and her children.
This is a really good book.  There is just enough mystery to be exciting and enough spooky to make you look over your shoulder. 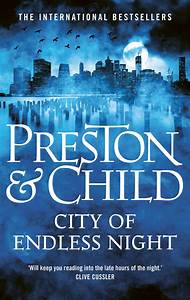 City of Endless Night  by Douglas Preston and Lincoln Child

In Queens, two boys stumble on the body of a headless woman in a garage. Fingerprinting identifies the body as that of Grace Ozmian, the missing 23-year-old daughter of tech billionaire Anton Ozmian.  Lt Vincent D'Agosta quickly takes the lead in this strange murder knowing his investigation will attract major scrutiny.  Therefore, when FBI Special Agent Pendergast shows up, he is much relieved.  Before too much progress is made, more people are murdered and decapitated.  There seems to be no motive for the killings.  Although Pendergast initially comes into the case reluctantly, ultimately, it will take all of Pendergast's skill to solve and catch the murderer.
This is the 17th book in the A.X.L. Pendergast, series.  I’ve read most of the books in this series and mostly I like them.  One or two have been a little tedious to read but I really did enjoy this one.. 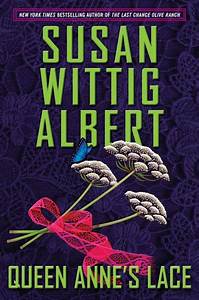 While helping her friend and business partner, Ruby Wilcox, clean up the loft above their shops, China comes upon a box of antique handcrafted lace and old photographs. Following this discovery, China (a stout-hearted pragmatist) hears a woman humming a tune and smells the delicate scent of lavender.  Then strange things begin to happen – the appearance of old photos, a ringing bell, a sprig of thyme, a mysterious woman in the garden.  With this, China starts to investigate the story of the woman in the old photographs.
I’ve read all the China Bayles books by Susan Wittig Albert starting with Thyme of Death to this latest one.  I’ve read them in order and would suggest doing that because, life for China moves along and she changes and grows along with her family and friends in Pecan Springs, TX.  The books can be read as “stand-alones” because China does introduce herself and the primary characters in the early pages.  But, it’s better to read them in order.  I also like these books because the author includes all sorts of herb lore, information, and recipes.

I may have said this before, as I have gotten older, I like to read things that are completely entertaining and not something I have to
1     think hard about
2     learn a “how to improve myself” lesson from
3     back track constantly to remember who is who and where and why 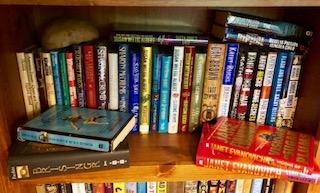