Salty tears and moving on

Ok, I hear you – “If it was so good in Galveston, so many wonderful memories, so much to miss every single day, why did you leave?”  It was good when we were there and while I miss the soft sea breeze and walking down to the beach daily ….. 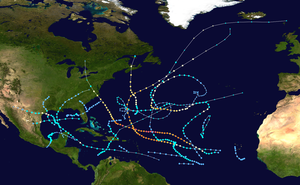 ….I don’t miss the STORM WATCH.  For those of us living on the coast, we started paying attention to the Weather Channel as early as April until as late as November.  We watched storms as they came across the Atlantic – would a storm come into the Gulf?  And then -what direction did it appear to be traveling?  Might it change directions?  Do I have to start thinking about moving everything?  Will I have to pack up and leave? 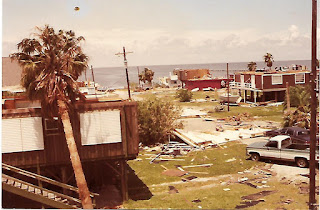 In theory, I knew when we moved to the West-end, that there was always a chance a major storm would come in – (I knew this, “in theory”).  And it actually took several years for the fear to set in.  Michael changed jobs - outside sales with a territory from Brownsville, up the coast as far as Florida.  He was gone every week, a minimum of 5 days and often for 2 weeks.  And, of course, it seemed the pending storm was always between where ever he was and Galveston – no getting home.  I did not enjoy having to pack up the house – move furniture and whatever else away from outside walls -  move everything on the porch, deck, yard and then try to decide would I have to take the large dog, 3 cats, and whatever else I could cram into a small car and head for Houston.

No, I never actually did that – evacuate the house.  I had the mind-set (and still do) that if I stayed in the house, it would be safe.  I could hold it down and together by sheer force of will.  No matter if that makes sense to you, it works for me.  And, we did have out share of storm remnants – lots of wind, rain, water but we had no big storms. 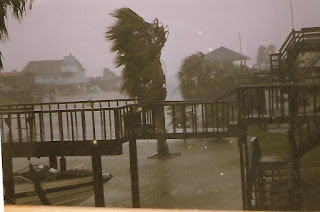 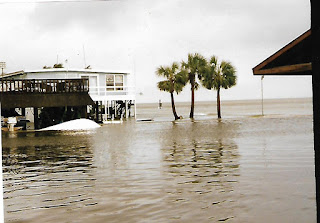 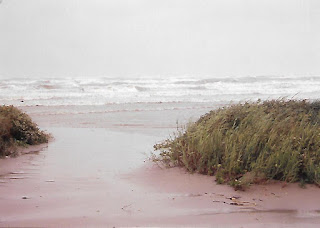 Then in 2003, I began to be seriously concerned about an unknown storm out there someplace, sometime.  It nagged on me in the back of my mind until I finally knew, I didn’t want to, couldn’t lose everything.  Was I seeing ghosts in all directions?  Maybe.  But here’s something to think about, we moved in 2004.  Hurricane Rita came ashore along the Texas coast impacting an area from Galveston to the Golden Triangle in September 2005.  Hurricane Ike made landfall on Galveston Island on September, 2008.  During the aftermath of Ike, the west-end was cutoff for weeks.

Storms weren’t the only reason, of course.  It was often difficult living there.  Galveston was then and is a tourist hotspot.  There are festivals and events all the time.  Honestly, I often wondered if the island would just sink when there were 200,000+ people expected for an event.  And, go into town – even to the grocery store?  Frustrating at best.

Then, it was more expensive to live there than we had originally thought.  For instance, you would need to carry three different types of insurance on your home – 1. storm (basically covers wind damage), 2. rising water (obvious – storm surge or flood water) and 3. Standard home owners (whatever else).

Also, during this time, the island seemed to finally to have been recognized as a beautiful resort location and new HUGE homes started sprouting up – everywhere on the west-end – most of which were mega-million dollar houses.  It sort of changed the feel of the place.

It got to be hard to live there, at least for me.  So, we started looking at options. 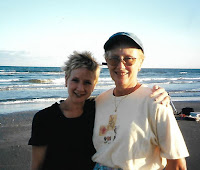