The next day after the movers left, MHN and I went back to the beach house with a smallish Uhaul trailer to get the rest, clean up and be gone.  We worked ALL DAY LONG and there was still stuff left.  Went back again, convinced that we’d be finished – nope – again, worked all day long.  Went back yet again (and that’s when I started throwing things away), finally got everything packed, cleaned up, and us gone.

May I say, those were 5 of the most tiring days I think I’ve ever had.  After having to go up/down stairs all day long for 5 days, if I’d had to deal with any stairs at the new house, I think I’d run screaming down the street.

OK – we are here!!  Now it will get less stressful and hectic – right?

On Monday morning, the contractor arrived to start the work we wanted done.  The house was in total disarray and I couldn't unpack anything and I COULD NOT FIND ANYTHING.

I hate to move.

Not only was everything lost in space, this was an OLDER house.  Being an older house, it has several good/bad things.  We thought we were aware of most of the bad things and had made plans to
update.

1.         There were, oh, 2 plugs per room (except in the tiny room, where there was one plug).  Two plugs per room is not very many especially when the plugs are nowhere near the place where something electric needs one to be.  For instance, the bedroom plugs were beside the door, one on each side – the bed, bedside tables, and lamps were across the room.
2.         The cable company assured me they could supply us with cable TV and DSL – no problem except, after they got to the house, lo and behold, they didn’t go as far as that house.  They were happy to supply us with cable and WE could stretch it across the street and barn to the house – hmmmm - NO. Next option?
3.         The telephone was supposed to be turned on between the 17-20th – nope no phone until finally at 5pm on the 22nd.  Then, the sellers neglected to tell me that they had a second line to one room so I could let the phone company know.  Found out when the SBC lady says, you have no service to that room (yes, that would be the room where lived the computer and my desk).  Fortunately, she was a very nice lady and did her magic and a dial tone appeared on the phone in question.
4.         There was a slump in the roof – something the inspector seemed to have overlooked, so the central AC/heat unit couldn’t go up in the attic.  This meant rethinking the kitchen remodel to make a place for it.
5.         The dishwasher did not work.  Neither did the reverse osmosis water system.  (Remember I told you we were on a well?  The well water here in Wharton tastes like sulphur.  Having the reverse osmosis system – a must.)  Water softener didn’t work. Nor the water heater.  In minutes, the hot water in the TUB ONLY, cooled down during a shower until there was no HOT water (nobody ever figured that one out – and no, it wasn’t the fixtures – we replaced those).  The sellers burned their name in the wood floor in the breeze-way entry area (that would be the door the world in general used) – kept that covered with a rug during all the showings.  The gas heaters (these were ugly huge wall heaters – only heat in the house and didn’t work in fact, weren’t even hooked up because at some time, they had caught fire and singed the attic plus there was no outside venting for those awful things) and one of the window units went out almost immediately (central air/heat installation became #1).  The barn, while huge, leaked like a sieve – almost as wet inside as out during a rain.

The house was really well built and the 2 acres it sat on were
beautiful.  The barn was huge and with careful planning and using no cardboard, great for storing things.  There were lots of mature pecan trees, oak trees, magnolia trees.  There were neighbors.  The house had nice wood floors and some really pretty antique light fixtures.  The exterior was stone – not brick veneer.  We had a well (which originally, I thought was a good thing but, no electricity – no water and during Hurricane Rita, we had no electricity for 10 days – TEN – the number after 9 – 10 days).

Every night, after a long day of finding yet another major problem that had not be found during (1) the inspection or (2) disclosed by the sellers, Michael had to reassure me – “Yes honey, this was a really good deal and the right move.” 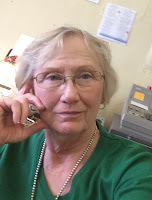