I was, for eight years involved with Girl Scouts, on many levels – from leader to council delegate.  It was a fun and interesting learning experience for me and, I think, for the girls in both daughters’ troops.  I was troop leader for my youngest daughter and once a week, after school, a dozen or so first

grade brownies arrived at my house for an hour of crafts or games or singing or projects – sometimes a little bit of all.  Every meeting started with,

On my honor, I will try:
To serve God and my country,
To help people at all times,
And to live by the Girl Scout Law. 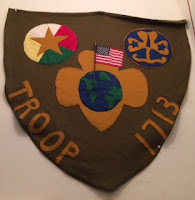 One of the many things I learned – Brownies (at that time, first grade to third grade) – could do anything.  For instance – the girls decided we needed a troop flag or banner.  Each girl drew a picture of what she thought it should look like, my co-leader and I winnowed the stack down to 5 and the
girls voted.  Then THEY made it – they did it all. 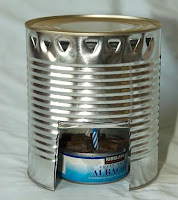 Another time we decided to make Vagabond Stoves and Buddy Burners and then, treat their fathers to lunch cooked at the park.  The girls each made her own stove and burner while we supervised and helped with some of the more difficult aspects of turning a large tin can into a stove and a tuna can into a burner.  Then, each girl had to learn how to light the burner with a match (question: what do we do first?  Answer: we tie our hair back with a scarf).  Then, they had to decide what they were going to cook and we practiced that.  Picnic day arrived.  Fathers and Brownies met at my house and we hiked to the park with the girls carrying their stoves filled with the burner and whatever else was needed (spatula, salt, buns).  I brought a cooler with meat, drinks, etc.  The girls all pulled out scarves, tied back hair and cooked their father lunch.  I mean, impressed the pants off those fathers!

At fourth grade, during the Fly-Up Ceremony, Brownies became Junior Girl Scouts.  As Junior Scouts, they were eligible to go camping.  Now, I wasn’t a leader for my older daughter’s troop however, I was a full-time camp mom.  That meant – I got to go camping with two different troops of 4th-6th grade girls six times a year for 4 years.  And, may I say – it was a very involved process.  Everyone just didn’t jump in the car and off we went.  No-no.  Everything had to be planned from meals to activities and the girls were involved every step.  And, as much as the idea of sleeping in a tent in the woods alarmed me (the city person) back then, it was a great time.

We actually only had one seriously frightening event.  Ok, so first of all, back then – Girl Scouts slept in 4-person, floored tents.  The tent sides could be rolled up and, seems to me, the tents had wood roofs.  Each tent had four cots and the floor was raised two feet off the ground.  There was a common eating and cooking area (that is cooking over a fire – no stoves).  In 1978, Troop 2209 (my older daughters troop) was going for their first campout in tents.

Quick note here – in the summer of 1977, three Girl Scouts in Oklahoma, while camping, had been asleep and were dragged out of their tent and murdered.  It was a terrible thing.  And, we were very aware, for that first campout.

So, we got to camp, unpacked, set up, cooked, cleaned, explored, sang taps and went to bed.  Riiighhht – sleeping in a tent with the sides rolled up in the woods along with the lions, tigers and bears.  I had just laid down in my cot (yes, fully dressed and shod) thinking I might doze a bit when, all of a sudden, there was a scream.

No no stop stop

Each adult hit the ground running, checking on girls in the tents around us.  Come to find out, one of the girls had a nightmare and while her tentmates were awaken, none of the others were.  But, for me, that was the last time I even thought about sleeping in a tent during a campout.  I found that I could go from Friday afternoon until Sunday morning with no sleep.  Not a problem.

I learned a lot during those years and may share more, from time to time.