Arrrggghhhh!  My yard is full of spring weeds! 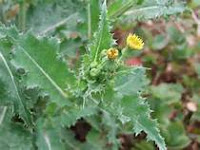 I walked around the back yard today and was annoyed, horrified, frustrated, and generally put-out to find one section, where the grass is sparse and the clover grows like mad,  full of Sonchus asper, also known as Spiny Sowthistle, Prickly Sow Thistle, Rough Sow-thistle, or Spiny-leaf Sow-thistle.  Now, I don’t mind the clover (oxalis actually).  It’s small and acts like a ground cover that doesn’t need to be mowed.  But I draw the line at a weed that can grow up to 5 feet tall.  It makes a dandelion-like flower (ok, that’s not bad) which then will turn into a white puff-ball seed head with helicopter seed that can float everywhere (that’s bad).  They shouldn’t be even thinking about producing new plants until January and certainly not blooming until next spring.  That’s like March, April, or May.  2018! 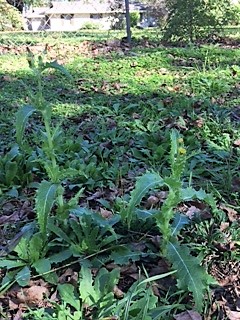 And, would you believe – it is considered an herb and is edible.  Of course, you have to remove the spines from the leaves and it’s best to use the young leaves.  It can be a little bitter but you’d cook it like spinach.

(Now, you may remember “the general rule of foraging for wild food is that anything with a white sap should not be eaten”.  Of course, like any rule, there are exceptions - like Figs, Groundnuts, Sow thistles and Wild Lettuce.)

I had to look up “Groundnut” because I didn’t recognize the name. 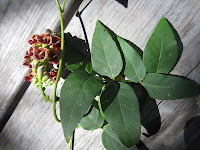 (Groundnut, a climbing vine, is a member of the pea or bean family and distantly related to the soybean. It can be found from Ontario to the Gulf of Mexico, and from the western prairies to the Atlantic coastline. Groundnuts, get their name from the bulb-like tubers that grow from the root system. Groundnuts can be eaten raw but are usually boiled or roasted and then added to soups and stews. Mild in flavor, they are used much like a potato, though more nutritious. They contain three times the protein of a potato. They can also be stored much like potatoes in a cool, dry area for a lengthy period of time.  OK, that’s doesn’t actually sound so bad – for a weed.)

OK, so they are coming up in the yard.  What to do?  They have a long tap root and you need to get it all, or the damn thing will pop back up and be twice as big.  So, you can -

Pull Them Out.  Maybe, if the ground is fairly wet and you have on gloves.  I did, one year, go around the yard and dig them out.  However, Michael had 47 little fits over all the little holes/divots in the yard.  Picky, picky, picky

Roll Out Landscape Fabric.  Yes, but then you have a section of yard with weed cloth on it.  That doesn’t work for me.

Hire Goats.  Sounds good though I’ve never seen anyone going door to door with “Goat renting by the hour”.

Pour Boiling Water on Them.  This is a tried and true weed killer of mine.  Works great on sidewalk weeds.

Salt Them.  Well, maybe.  Problem is that salt can leave the ground barren so if you’re going to do that, be careful.

Pour Vinegar on Them.  Another tried and true process and, just to be sure, I will also boil a little water first, then add in the vinegar.  Works pretty well on fire ants too.  You need to use it sparingly as it messes with the soils pH.

Eat Them.  OK, we talked about that already.

Learn to Love Them.  One man's weed is another man's rose. Many weeds are native plants that Mother Nature intended to thrive — that's why they're so hard to kill.