Stingy Jack and the Jack O'Lantern

Many years later when Jack finally died, he went to the pearly gates of Heaven and was told by Saint Peter that he was too mean and cruel, and had led a miserable, worthless life on earth.  He was not allowed to enter heaven.  He then went down to Hell and the Devil.  The Devil kept his promise and would not allow him entry.  Now Jack was scared.   He had nowhere to go but had to wander about forever in the darkness between heaven and hell.  He asked the Devil how he could leave as there was no light.  The Devil tossed him an ember from the flames of hell to help him light his way.  Jack 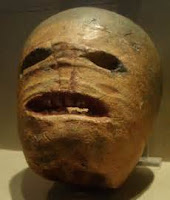 placed the ember in a hollowed-out turnip.  For that day onward, Stingy Jack roamed the earth without a resting place, lighting his way as he went with his “Jack O’Lantern.

Carving pumpkins into jack-o’-lanterns is a very popular Halloween tradition.  But did you know, that jack-o-lanterns originated hundreds of years ago in Ireland.  Then they were made out of turnips or potatoes which were set on porches and in windows to protect against wicked spirits on Samhain when, it was thought, the boundary between this world and the Otherworld thinned.

The Irish began immigrating to America in the late 1700- early 1800’s and brought their traditions with them. Once here, they discovered the native pumpkin – larger and easier to carve. And so, an American tradition came into being.

I found some hints from Professional Pumpkin Carvers (who knew??) ---
1.    Good carving starts with the right pumpkin.  Choose one that is fresh, with a sturdy stem, good “face”, and a flat bottom.
2.    Cut out the lid on an angle, so it won't drop inside the pumpkin when you replace it.  OR you can cut a hole in the bottom or the back if you want to use the stem as part of the face.
3.    Hold the pumpkin in your lap so you can see “the face” as you carve.  Hmmm – doesn’t work for me because my pumpkin is too big/heavy to sit easily in my lap.
4.    Keep your pumpkin fresh.  There are all sorts of recommendations for this – petroleum jelly on the cut edges, dipping it in bleach, one I saw recommended you spray the finished pumpkin with bathroom cleaner with bleach to control bugs and mildew.  I don’t worry about this because I carve the pumpkin on Halloween day.

5.    Create a chimney.  Light the inside candle and put the lid on for a few minutes.  Then, make a small chimney (hole) in the place where the lid has turned black.
6.    Keep all the carved away pieces (including the seeds and pulp) to use as accessories. 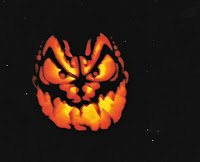 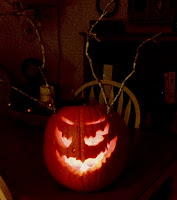 Last rule of Jack-o-Lantern carving – it needs to be scary!  Keeping away evil spirits, you know. 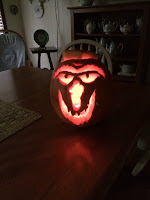 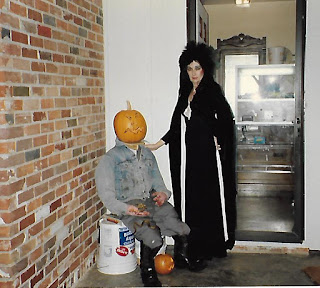