When we left Colorado, we moved to Phoenix, AZ in the 1990’s.  Yep – one extreme to another.  I have to admit, I really did expect the surrounding desert to be something like the Sahara - you know, all sand and dunes, the occasional camel. 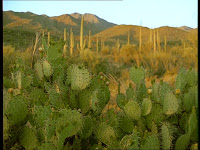 Not so.  The Sonoran Desert is alive with all sorts of growing things.  No big trees, of course but all sorts of smaller trees, cactus, sages, creosote, and, when it rains, wild flowers.  I love the Desert Willow – a small tree with orchard-like flowers. The saguaros are very impressive, huge, and grow wild in the desert.  Ocotillo look like spiny sticks coming out of the ground, until it rains.  Then it will burst into bloom and leaf.  Ice plants, agave, palms, every cactus you can imagine – the list goes on and on.  There are lots of lemon, lime, orange, and grapefruit groves everywhere.  Given water, most any plant will grow there.  Xeriscaping is popular and very attractive in that desert way. 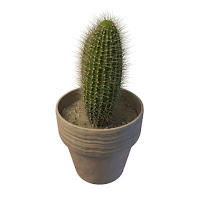 We bought a saguaro cactus – it was about 4 inches tall.  Michael picked it out and figured, because they are so long lived, it would become a family member so he named it 'Lil' Joe Saguaro.  Unfortunately, many years later when we moved to Galveston, Lil’ Joe died.  Didn’t care for the 10000% humidity and salt air.

We moved there in the winter time and, oh my lord, winters are marvelous.  Chilly evenings and mild days.  Dry air?  Oh yes, very dry.  Summers ….. well, to say summers are hot does not convey what hot is.  I discovered a couple of things about the summer.  1.  You must have a good sunscreen and you must wear it every single day!  2.  You cannot work in the yard after 8 in the morning.  3.  110 degrees is bearable; 117 is hotter than hell; at 122, they close the airport.  4.  If you want a garden, you have to plant it in February because it will burn up in July. and  5.  There is no walking outside barefooted after June 3.  And, please, don’t you dare say “But it’s a dry heat”.  Puulleease 110 to 122??? Hot in any place.

We did many scenic drives while we were there but the most memorable was The Apache Trail drive.  Just past the Roosevelt Dam we encountered one of the scariest road I’ve ever been on.  And, to call it a road is something of an exaggeration.  It was a dirt and gravel donkey trail.  We never drove faster than 15 miles per hour and usually much slower than that.  Most of the time, we were on this road, there was a million mile sheer drop ON MY SIDE, OF COURSE!!  I kept telling Michael to move over, I mean, it looked like the car tires were driving on the crumbly rock edge.  And bumpy??  It was ungraded rocky dirt.  We rattled and shook and bumped and jarred and twisted and turned and went straight up and straight down for the entire trip.  It took us 3 hours to drive 22 miles!! 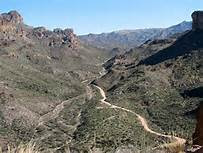 What was really unnerving, was to encounter another car or (god forbid) a truck.  First one we saw coming toward us (and there was not any warning because the road twisted so much) was a huge truck towing a huge boat.  Michael strung together more curse words in very descriptive way than I had heard before.  I would have loved to have stopped to take a few pictures because as scary as the road was, the scenery was beautiful, but there was no place to stop, short of the middle of the road.  We went over several “expansion bridges” or so they were called.  These were one lane jobs and fortunately very short because most came right off into a hair pin curve.  One thing I did decide - there should have been a filling station at the start of the 22 miles of dirt that says LAST STOP FOR GAS, WATER, AND FOOD FILL UP HERE.  Let me tell you, at 10-15 miles per hour on twisting road, you use a lot of gas and there were not any filling stations alongside the road because there were no “alongside” places.  One side was mountain going up and the other, mountain going down.  After we got to black top again, I decided it was a good thing MHN drove (he was, by far, the worst passenger in this universe) because I’d of either left him on the side of the road after the first 10 seconds or he would have had a heart attack or would have stomped a hole through the car floor.

One more thing and then I shall close.  During the summer the “monsoon” season came upon us.  I have decided I don’t know what the word monsoon means in Arizona because it surely doesn’t mean it’s going to rain a lot.  About 3 evenings in 7, the sky would cloud up, there would be all sorts of rumbling from the heavens, a beautiful light show, 6 or 7 drops of rain and it would clear up.  Then everyone in my office would come in complaining about how HUMID it was outside.  Mostly I told them – shut up, you have no understanding of the word HUMID.  I come from a HUMID place.  It is not HUMID at 30%.

I did love living there though.