Colorado to Arizona - I hate to move.

So –   We stayed in Colorado a year and for a number of reasons made the decision to move.  Both daughters were in Arizona and as fate would have it, MHN’s company offered him a transfer to AZ.  The problem being that he was going to have to leave almost immediately.  I would get to stay and pack everything up, deal with the movers, and follow as soon as possible.  Unpacked it all; packed it all; I’m doing something wrong here. 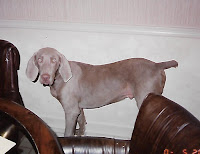 The packing went smoothly enough and I hired a mover.  As time came to leave Colorado and turn southward, my sister offered to come up and make the Boulder to Phoenix drive with me.  Moving day arrived and so did the snow, which continued and turned into a white-out blizzard.  Again.  We left with my little LeBaron packed to the roof with two humans, one 110 lb. Weimaraner, 3 cats in individual carriers, assorted minutia that had been left, suitcases,

pillows, cooler, and heaven only knows what else.  Honest to Pete – I felt like a gypsy.  About, oh, 10 minutes into the drive we heard that there was a huge pile up on the highway (our highway) because of the snow storm.  That slowed things down even more but we kept right on rolling – slowly - but rolling none-the-less.  All of a sudden one of the cats started to yell – really loud.  She didn’t appear to be hurt or even uncomfortable – I think she was just stating her opinion about another move. She yelled, non-stop for
3 hours until I thought I would just have to set her carrier out on the side of the road.  As it happened, I turned her around so she faced the back and either she stopped howling or we couldn’t hear her because it got less noisy.

We had to stop every so often to kick the ice and snow off the wheel wells (and you know, I’m pretty sure that is just not in my job description being from the south and all), let Gus out, stretch our legs and backs, and generally keep the tedium of a long drive in snowy weather under control.  Once again – it’s a 2 day drive to Phoenix from Boulder.  We stopped in Albuquerque for the night a little more than ½ way.  Now, the quest was to find a place that would allow the big dog and three cats and we had not much success there.  Plus, it was getting late and dark and we were both tired and so we sort of cheated.  We saw a sign for the “A-1 Motel Owned by Americans”, a smallish motel, a little shabby looking but right off the interstate.  So, I went in and asked for a room preferably close to the back door “so we could keep an eye on the car”; in reality, so we could sneak Gus and the cats into the room.  Got everyone into the room, fed, watered, and generally settled.  Then Ellen and I alternated going for some dinner.  I was concerned about leaving Gus alone in a strange room, fearful he’d bark or, gods forbid, start howling.  She went first and when she got back said, “ohmigod, the pot smell is so strong in the hallway, you could get high just walking down it.”  Oh good.  I went to eat and we both went to bed early.

Long about 3 am, Gussie woke me up whining and pushing his nose into my face.  He walked over to the door, looked at it, looked at me, looked at it.  Oh nooo – go outside – in the dark  - really???.  After assuring me he absolutely could not wait another couple of hours, I got up, got dressed, got the leash and headed for the door.

Just as I put my hand on the handle, a bloodcurdling scream came from the room next door.  I took my hand off the handle and just stood there.  Then, followed a full blown screaming argument between a man and woman.  She was screaming so loudly I could hear her every word and, may I tell you, none of them were nice.  She called that man every unflattering thing she could think of and then told him things he could do, a few of which would have been physically impossible.  He would answer her back in a quiet voice.  Then I heard a huge crash (door being thrown open so hard it hit the wall behind it and shook that little building) and more screaming invectives.  I just looked at Gus and said – “hold it, we’re not going anywhere”.  After a while, things got quiet.  Ellen, who was awake through the entire screaming affair, asked me if I wanted to go ahead and leave.  So we did.  Loaded up the big dog, three cats, and everything else and set off for Phoenix.

We arrived at the new house about the same time the truck did.  The same procedure took place – that is, me trying to check off boxes and three guys carrying them in through every door in the house, then facing umpty-bazillion boxes to unpack.