We did, many long years ago, plant pumpkins in the backyard garden.  Well, that’s not totally true – the pumpkins were planted accidently.  And the fact that they grew, still, amazes me.

As it turns out, that year when I cleaned out the annual Halloween pumpkin, I put a handful of seeds and pulp in a small bowl with the idea of maybe roasting the seeds.  That never happened because I put the bowl on one of the corner shelves beside the window and promptly forgot about it. Then, some months later, I noticed the bowl, took it down and looked inside to find an icky mess of mildew covered seeds and pulp.  Yuck.  Took it outside and dumped it in a back corner of the garden and again, forgot about it.  Come spring (like late February or early March – I live in south Texas, you know), Michael called me outside – “What is this”, sez he, pointing to a small green plant growing.  Well, that’s about where I dumped the pumpkin seeds, so maybe pumpkins?  Actually, this is not the way to  plant pumpkins ….. 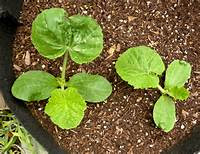 Pumpkin plants are either indeterminate (that is creeping vines) or determinant (shorter more compact vines).  They prefer a well-drained, loamy soil, but they will grow in heavier clay soils.  They are deep-rooted and like deep watering along with balanced fertilizer.  (Interested in making your own fertilizer? 1⁄2 cup blood meal (for nitrogen), 1 cup bone meal (phosphorus), 3⁄4 cup greensand plus 1⁄4 cup hardwood ashes (potassium), 2 tablespoons agricultural lime (calcium), 2 table­spoons pelleted sulfur, and 1⁄3 cup Norwegian kelp powder.) Pumpkins need ample space to grow and if they are indeterminate, they need a large space.  They are sensitive and will need shelter from wind and frost. Try to protect pumpkins from the worst of the elements by covering them during heavy rains, or putting up some kind of barrier to protect the vines from high winds or using shade tents during summer’s hottest days.

And so the accidental pumpkins began to grow and grow.  We had a couple of vines and as the months went by, one began to produce flowers.  The others were pulled up and all attention was placed on the one remaining.  The flowers would bloom and drop off, no pumpkins.  Michael called his father as asked about the “no pumpkin” situation.  Lack of pollinators. 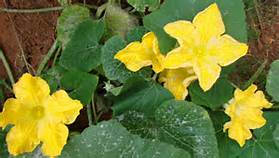 Pumpkins produce both male and female flowers that need to be pollinated. The female flowers are open for only one day.  A standard method in the horticultural world to ensure good pollination is to use a small paint brush or Q-tip and brush pollen from the male stamen onto the female stigma.  A good female flower candidate (for a large pumpkin) should have a stem angle which is almost perpendicular to the vine. (I don’t know why – I am not the farmer.)

And so, Michael became a bee.  Every morning he would go outside and buzz around his pumpkin vine pollinating flowers.  OMG – it worked!  Several small pumpkins were born.  MHN did, of course, want to have a mega giant pumpkin.  Because I had a new computer at work, I did a little research on “growing a pumpkin”.  Now, back in the dark ages of computer searches, there was not nearly as much information as is available today.  But, the general consensus was to give it lots of water and/or milk.  Which he did (well, not the milk so much but the water certainly) and his baby pumpkin began to grow. 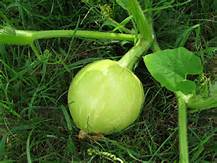 Since vines put out roots at every leaf, carefully tear out the roots of the vine where it is close to the pumpkin. This will give it free room to grow without damage to the vine. Gently train vines away from the pumpkin to prevent it from crushing them, try giving them a nudge in the right direction every day.  To ensure a rounded pumpkin, every day give it a gentle turn to the left and the next, a turn to the right.  Allow at least 4 months for your pumpkin to grow, longer for a larger fruit.  Remember that there are 100 or more leaves to each vine and if you are trying to grow a 300-pound pumpkin, each leaf is responsible for up to four pounds of weight in your pumpkin.  Keep your vine healthy and as weed free as possible.

Every day he went out and turned it one way and the next day, the other.  Then, tragedy struck.  He came in one evening dragging his feet with a very sad face.  “I turned the pumpkin the wrong way.”  Stem cracked and now we had a pumpkin sitting on my kitchen counter.  It was September then, too early for Halloween.  Oh what to do!