So - what can cure madness, summon snakes, and make your roses smell better???


When I chose herbs to talk or write about, I try to choose ones that I’ve grown at one time or another.  That way I can speak with some experience on how well they do here. 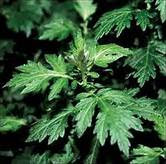 Common Wormwood, Sailor's Tobacco, Felon Herb, Chrysanthemum Weed, Wild Wormwood, Old Uncle Henry, Naughty Man, Old Man, White Sagebrush, Louisiana Sagewort, Silver Wormwood, Cronewort are all common names for Mugwort.  It is a self-seeding perennial with a long history of culinary and medicinal uses though, it’s not used so much today.  Leaves were used as a bitter flavoring for oils, meats and fish.  And prior to using hops, brewers used mugwort in making beer.  This plant is attractive to bees, butterflies and birds. Flowers are fragrant.  It should be planted in a sunny location and once established, it needs little water.

When carrying Mugwort you cannot be harmed by poison, wild beasts or sunstroke.  Always good to know.  And, taken as an infusion, it was thought to cure madness.

The plant contains high levels of antioxidants, which help digestive and intestinal problems. It works as an antiseptic, has skin-cell regenerative properties and is good for healing wounds.  Components of mugwort are also being tested and studied as a possible alternative treatment for some cancers.

It's a yellow dye, an insect repellant, an ingredient in food dishes, and a possible treatment for conditions ranging from flatulence to cancers. Not bad for something many consider a noxious weed.

This is a very unusual plant and I have to say, I was totally surprised when I discovered that it is considered an herb.  Horsetail is native to both North America and Europe. It is one of only a few Equisetum survivors from the dinosaur era.

Horsetail is fond of wet or boggy areas and thrives in poor soil, making it a perfect choice for areas where other plants do poorly. Be careful planting it because it is very invasive and once in the ground, it is really hard to get it all out (voice of experience here).  I first used horsetail in my ponds because (1) it did very well and (2) The fish and turtles would not eat it to the dirt.  Nowadays, I keep it in a pot and have the pot sitting in a large container of water.  Horsetail prefers bright light or morning sun only, high heat and humidity.

Horsetail contains silicic acid, saponins, flavonoids, sterols, tannins, potassium, aluminum salts, manganese, magnesium, sulfur and calcium.  Historically, it has been used to stop bleeding, repair broken bones and as a treatment for arthritis and osteoporosis.  Also, it has fungicidal properties and infusions can be used to treat powdery mildew and blackspot on roses.  The dried stems have a high content of crystalline silicon and have been used to scrub and polish tin and wood. And last but not least, it can be used to summon snakes by making a whistle from the stem. 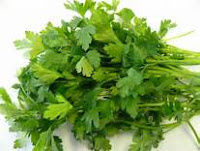 So, did you know??? there are more than 30 varieties of Parley, but the most common are curly-leaf and Italian or flat-leaf parsley. The flat-leaf has more flavor and is more often used for cooking.  Curly tends to be used more often as a garnish.  And, make sure you eat that piece of garnish because chewing parsley will help with bad breath.  While the leaves are most commonly used, you can also put the stalks into soups or stews for flavoring.  Parsley goes well with chicken, eggplant, eggs, fish, lentils, mushrooms, seafood, pasta, peas, potatoes, rice, tomatoes squash, and lemon.  Add it at the beginning of the cooking process – it will keep its flavor but lose its color.

Parsley is a biennial (which means year 1 it will grow like mad and year 2 it will bloom, make seeds, and die).  It belongs to the same family as dill.  It’s rich in iron and vitamins A and C.  Plant it in a well-drained sunny place.  It lends itself fairly well as a potted plant.  It attracts butterflies and is the
larval food for the Black Swallowtail Butterfly.

It has been used in the treatment of prostate, liver and spleen diseases, as well as anemia, arthritis, and microbial infections. It has also been found useful as a diuretic and laxative.

Parsley is a great companion plant.  Grow it with asparagus, chives, carrots, corn, chilies and sweet peppers, onions, peas, roses and tomatoes.  Planting parsley at the base of your roses will increase their fragrance.  However, you don’t want to plant it with mints or lettuce.

Homer tells of chariot horses being fed parsley by warriors prior to battle in hopes of making the animals more fleet of foot. And in ancient times, parsley wreaths were used to ward off drunkenness.  So, next time you head for the local pub …..

Parsley seeds tend to be very small and very slow to germinate.  It was said that the reason for the slow and unreliable germination is that the seed goes nine times to the Devil and back before coming up. The ungerminated seeds are the ones that the Devil keeps for himself. Additionally, it was thought that parsley would only grow when the woman was master of the household. 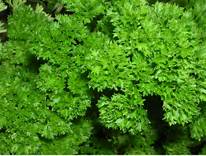