A couple years ago, I got to attend the Chicago Marathon.  My older daughter

was going to run and asked me to come in case she got hurt.  So, I flew up there and met her.  After arriving Saturday, we caught the 'L' to our hotel which was right downtown and about 10 giant steps from the train.

found umpty bazillion people there.  It was like a trade show for runners – all sorts of running paraphernalia – everything from shoes to clothes to power snacks/drinks to sunglasses to water dispensers and so forth.

Sunday morning we were up early.  She left at 6:30 to get checked in and ready.  I waited until about 9:30 and walked over to Grant Park. OMG I have never seen so many people in one area.  According to the marathon people, there were 45,000 runners from 110 different countries (including family and friends, over a million visitors!). The weather was perfect – brilliant blue sky, no wind, early morning temps in the upper 40’s warming up to the mid 70’s.

house to the Home Depot in Rosenberg.  That’s a long way to run.  My general thought on running is – Fine, if someone is chasing me with a big knife, otherwise – no, no, no.

There was more security than I’ve ever seen in any one location.  Police walking, riding bikes, in cars; swat team guys all in their swat togs with guns; helicopters patrolling; security companies patrolling with dogs.  It was amazing.  Then, there were several thousand volunteers all around the entire area ready to give directions, help if someone was hurt, answer questions, whatever.  At the Hospitality Tent there were places to sit, a desk where you could check on your runner, and

televisions showing the race.  Runners started in waves between 7:30 and 8am.  (The two winners, both from Kenya, finished in 2 hours.)  Oh – and one other thing – I have never seen so many different colored athletic shoes in any one place – ever!  I never even knew they came in so many colors!

My daughter thought it would take them about 5 hours and I went the bleachers at 11:30 to watch for her.  And, I know I’m using this 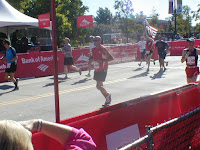 word a lot but it was amazing to watch the river of people running.  All types of people; some ran, some walked, some skipped; many ran in costumes – I saw several supermen, a wonder woman, a number of fairies with tutus and wings (male and female); a number of bare foot runners (I figured these had to have ‘hobbit’ feet); a couple of blind runners with guides; runners from ages 10 to 70.  All ran by in a steady stream. 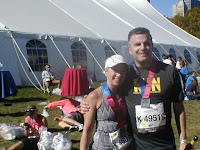 And, wouldn’t you just know – I missed her running past me.  She did get hurt, tore her ACL muscle, but did not quit and did complete the marathon in 5 hours.  It was the best trip to Chicago I’ve made!