OK – we all have those things we are, perhaps not afraid of, but really, really, really don’t like.  For me it’s rats – rats, mice – they’re all rats to me.

2006  Friday morning, I walked out the back door to find the dogs trying their best to get at something behind the small cabinet that sits there by the door.  I figured it was a toad, something they both chase regularly.  Between them, they had dumped over the basket of pecans sitting by the door, scattered yard shoes everywhere and shoved the cabinet catawampus next to the wall.  So - I pulled it away from the wall so they could get to whatever it was before they destroyed everything on the porch. 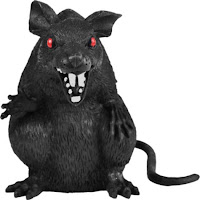 Wasn't a toad.  Was a rat.  A really big rat that was trying to climb the wall to get away from them.

Well, to be honest, my first action was to scream, jump back into the house, slam the door and lock the dog door shut.  Perhaps not the bravest of reactions, but at least I didn't run out the front door heading down the street shrieking (I had given some thought to that but....). 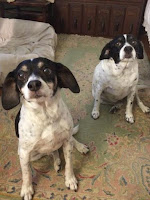 It got away from them.

Zipped right past them both heading for the other side of the porch.  (Now, in a space of a couple of seconds, I was thinking --- This might be the best time to call for help - is there a "rat patrol" here in Wharton?  What if it gets away?  I'll never be able to go out on the porch again.  I’ll never be able to go into the back yard ever.  Ohmigod - what if it gets into the house?).

Dogs were hot on the heels (do rats have heels do you think?) of said rat when it made a hard turn and headed for the gate. 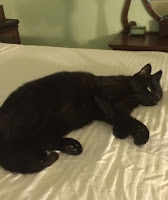 During all this hullabaloo, our cat, Pyewacket was sitting on a table just watching.  As the rat headed for the gate, Pye casually jumped down, snatched up the rat and hopped over the fence.

As this point I gathered up my courage and went outside after Pye who was laying in the grass watching the rat.  He hadn't killed it but had definitely given the rat a big owie because it was dragging itself along the grass toward a thick stand of four-o'clocks.  After a minute or so of watching, Pye jumped up and swatted the rat back into the yard.  I told Pye to keep ahold of the rat and ran for the shovel.

When I got back with the shovel, Pye walked away from the rat and, ALL BY MYSELF, I whacked it several times until I was pretty sure it was dead or past the point of terrorizing women and small children.  Then, ALL BY MYSELF, I scooped it up, carried it across the yard and tossed it into the holly bushes over by the barn.  Nothing gets through the holly without serious injury.

I get an “ATTAGIRL” for this action!