I had every intention of putting up a post before the end of June.  You know what good intentions are, right?  They’re what pave the road to hell. 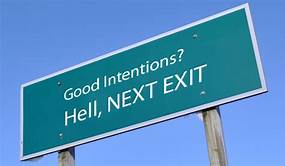 I do have a couple of good excuses though.  Sunday my youngest daughter and grandson came over (she lives in Katy which is a part of Houston) as did my granddaughter from San Antonio.  They brought all kinds of things with them – lunch, dessert, and a party (it was my birthday). 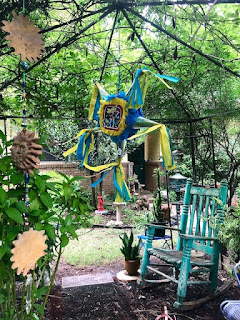 Honestly – I’ve never had a party with a piñata.  I’ve been to grand children parties with them but have never got to take a swing at one myself. 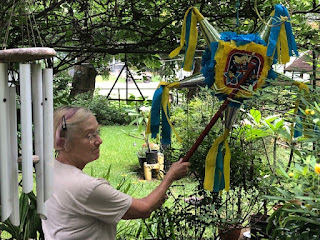 Yep – that’s me with a big stick and determined face.  Gave it 5 or 6 big whacks (very therapeutic, whacking something, hard as you can) aaannnnnd – nothing.  I did break off one of the spokes but didn’t pierce the interior with whatever goodies were there.  Then, everyone else took several whacks at it also.  The most graceful was my 20-year-old grandson.  He has studied sword fighting (not with a fencing rapier – with a medieval sword) and gave it a quick salute and then three hard hits, so fast you couldn’t see them.  It did finally get broken open and out spilled enough candy to put half the town into sugar shock.  It was soooooo much fun!

I will be moving in the very foreseeable future.  There are many reasons for a planned move but in general, it’s just downsizing.  My sister and I have spent much time looking at options, making decisions, and generally getting things ready.  Ugh.  I hate to move (and please, all gods and goddesses, let this be the last time).  Anyway, a house was chosen and Wednesday it was delivered. 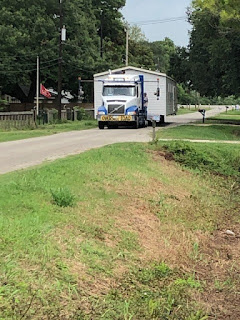 And, here it comes down the street 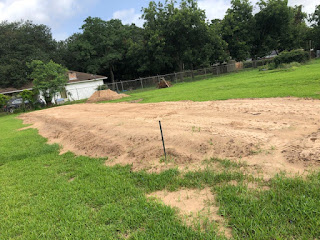 This was the end destination.  To get there, however, that big house had to maneuver through a fence gate, past a cement bunker, onto the pad. 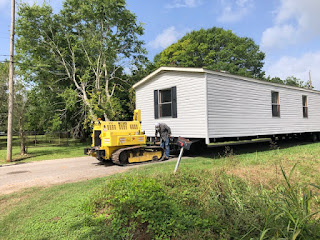 The maneuvering was done by that cute little yellow tug and a man with the remote control. 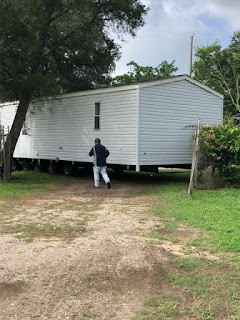 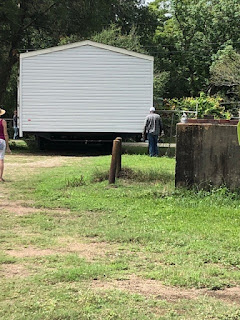 And, it finally came straight back and through the gate. 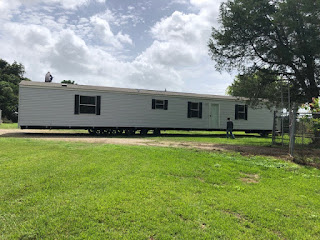 Took a couple hours to get it to this point.
Next it had to be turned to back over the pad. 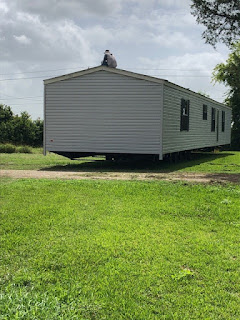 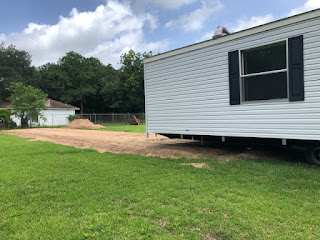 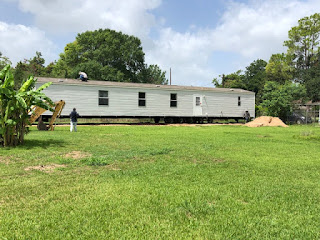 And a few minutes to get it to this point.

Then, came the work to remove the axle and wheels, install the tie downs, level it, and strap it down in place. 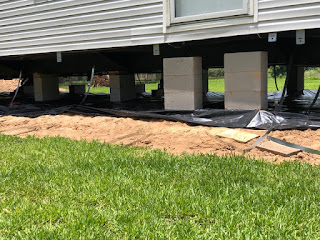 At this point, I went back to my sister’s house and looked through the window occasionally.  Why??? Because the men were crawling underneath the house to place the blocks.

My claustrophobia kicked in full power. 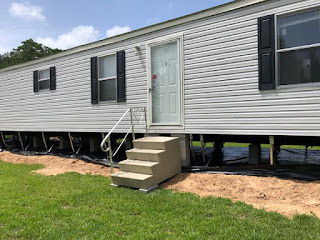 They still have to install the surrounding skirt but that won’t happen until the water, septic, and electricity are all hooked-up.  All things in progress.

It was pretty impressive and highly anxiety-ridden to watch but those guys know their business!  None of them were holding their breath or scrunched into a tight little ball.

As time approaches to pack things into boxes and move boxes, I’m sure you will hear many screams, laments, whines, and general – I Hate To Move! comments.  Plus, I will be selling my now house.  Anybody want to live in Wharton???