I wrote this not long after my husband died.  Today it’s been 9 years.

I have decided it is much easier to watch someone die when you KNOW they are dying; harder to watch someone die when you believe their situation is not life threatening.  When you know someone is dying, it is much easier to be patient, understanding, kind, to cry with them or for them, to want to spend as much time as possible with them, to be strong.  When you believe they are going to get better, it’s very easy to get exasperated, annoyed, frustrated, full of self pity, easier to think – he’s not trying, not listening, not making the effort to get better, easier to ignore the groans of pain.

When I look at the months between March and October, I realize Michael’s illness was like watching a child grow.  You see your child every day so the day-to-day changes don’t register.  Then, all of a sudden, BOOM! – two inches taller.  That’s how it was, by October – BOOM! – he was really sick.

When the pain started in his shoulder and arm, I left the responsibilities of getting medical help up to him.  Reminded him weekly to call the doctor.  Michael went to the doctor complaining of a pinched nerve – “ah yes, the problem”, the doctor told him, “is a pinched nerve in your neck.”  The diagnosis arbitrarily decided based on a car accident that happened 28 years earlier.  The doctor prescribed drugs for the pain, muscle relaxers, nerve drugs, anti-inflammatory drugs, anti-depression drugs – “You got a pain – I got a pill”.  The pain got worse.  “Call the damn doctor”, I told him, “again, again, again!”.

Michael could still get up easily, do a little work outside, could still do work his part-time job, although it hurt him to do so.  I discouraged him from doing things that caused the pain to blossom from tolerable to groaningly bad but he did it anyway.  With the clarity of hindsight, I think it was all he could do to show that he was still able to make a contribution to our life, help with the drain the drugs and doctor visits were causing our budget.

I worried about him all the time, helped when I could and when he would let me, which was not often.  He kept me at arm’s length in helping, perhaps his way of fighting what was happening.  From March until late October we tried muscle rub creams and aspercream on his shoulder, arm and down the right side of his back to maybe give him some relief from the pain he was experiencing.  A thimble of water on a raging fire.  He repeated the problems to the doctor – the pain was getting worse every day.  Michael’s appetite fell off.  He still ate, just not very much and if I wasn’t there to make him eat, he didn’t do it.  I fussed at him – he had to eat to get better.

Things just got worse.  Then, in October, I suddenly saw what was happening to him; suddenly something was bad wrong.  I took over the process of working with the doctors (a frustrating process in the best of times; in the worst – almost screamingly infuriating).  He fell in October for the first time.  This really frightened me.  His last visit to the doctor here in Wharton was the end of October.  I should have gone into the exam room but didn’t.  Doctor told him he needed a neurosurgeon and, oh by the way, he’d lost 40 pounds since his last visit, six weeks earlier.  A waving red flag – that flag opened my worry door further.  Funny that the doctor didn’t even question the weight loss.  Michael was barely walking then– it took a huge effort on his part and he could only manage with the use of 2 canes.

In November he stopped eating all together.  I begged him to eat, raged at him to eat, told him if he wouldn’t eat, he’d die.  Made no difference.  In November he could no longer walk or hardly stand.  It was a major effort for both of us to do anything – bathe, change clothes.  Several times in trying to shift him in his chair or when he fell the second time, trying to get him back to his chair, I just went off into hysterical tears – “I can’t do this, I can’t do this”.  And I know it hurt him terribly, those tears.  I should have been stronger.  Where is the superman suit when you need it.

Then it struck me, if I didn’t get him to a hospital, he really was going to die.  This was not a pinched nerve.  So, with the help of my sister and brother-in-law, we managed to get him into the car.  At what pain cost, I don’t know – he screamed with it.  Every second it took to get him into the car, hurt me too.  But, we did it and took off for UTMB emergency room – the only place that would take him in our insurance-less situation.

After that, it got a little better for him.  The doctors and nurses there are so professional, so good.  Moving him still caused him major pain but these people were careful and took care to try to hurt him as little as possible.

Of course, the admitting doctor told me from almost the beginning that she thought he had cancer – and it was - stage four lung cancer that had metastasized to his bones.  Like I said in the beginning, it’s easier when you know.  I drew on whatever strength I needed to be with him as much as I could, to be patient, to hold his hand when he was in pain, to talk about normal things, to laugh with him, to cajole him to eat a little.  I was afraid to leave him for long and am thankful for family and friends that could stay with him when I couldn’t.

Michael knew what his health situation was.  I told him he had cancer.  The doctors told him.  But, I don’t think he actually understood until the last day or so he was in the hospital.  When I told him we were going to come home, he looked at me and asked  - was it really that bad?  Yes.  And, shortly afterward, he sort of closed in on himself.  I reassured him that I would be alright, that the children would be alright, that he would be alright.

And, now, I find going home is hard because no one is there.  I miss the phone calls that once about drove me crazy – calls through out the entire day no matter where I was.  Once in a while, the phone rings and my first thought is “that’s Michael”.  Never is. 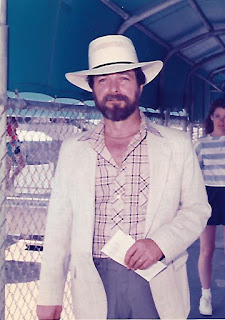 So much has changed in nine years.  I had someone tell me it takes 5 years to truly get over grief.  Yes, it does.  Do I think about him – sure.  Do I still mourn – no.  The world goes on – it changes and I’ve changed too.