I’ve mentioned before that I like to walk through cemeteries.  As a genealogist, it’s interesting to see older grave markers.  Sometimes they’re very sad.  Sometimes forgotten.  Sometimes curious.  I do understand that these places are for the living but I wouldn’t want to be in one.

Anyway, Wharton’s city cemetery is a few blocks from my house and the other day, I walked through it again.  It’s really big – seven or eight blocks square.  Some of it is surrounded by a rusting fence.  Most is open.  It’s not really well taken care of, though I don’t know if it’s the cities responsibility or the families of those buried.  Many of the tombstones have fallen over, sit kilted to one side, or are overgrown with weeds.

I saw some interesting things though – 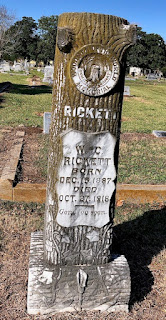 There were a bunch like this.
And, when I saw this one from a distance,
I first thought it was a dead tree stump.  However it’s not.

Woodmen of the World Life Insurance Society is a not-for-profit fraternal benefit society founded in 1890, based in Omaha, Nebraska that operates a large privately held insurance company for its members.  The history of this organization includes numerous philanthropic efforts, community outreach projects, and distinctive tombstones depicting tree stumps.  The organization was founded in 1890 in Omaha by Joseph Cullen Root after hearing a sermon about "pioneer woodsmen clearing away the forest to provide for their families". Taking his own surname to heart, he wanted to start a society that "would clear away problems of financial security for its members". 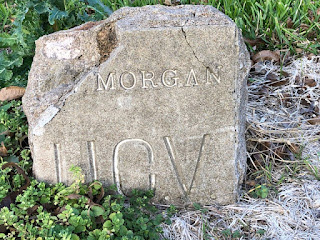 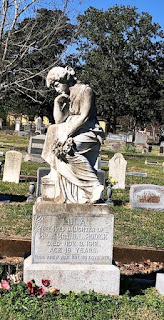 Some are really fancy 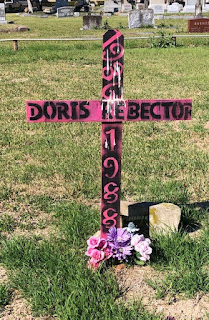 Some are very simple. 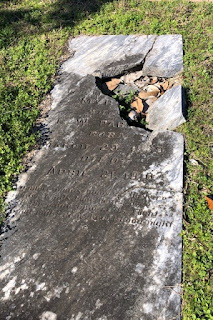 There are those that seem forgotten.
(or maybe, someone’s trying to get out!) 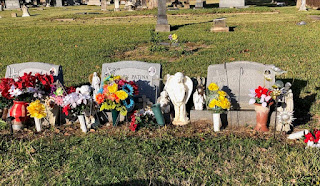 And those that are not. 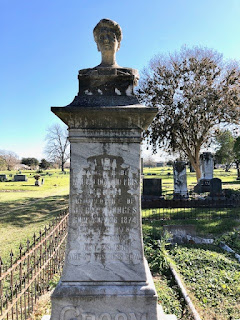 This one has a great deal of engraving, not only on the front side
Name, birth/death dates, age, parents names, husbands name
but a message on the back as well.

25 Nov 1911
Oh Lida
Will Papa nevermore behold thee.
See thy sweet face again
nor hear your merry laughter?
No not here my daughter
But surely I will in heaven.

Erected by my precious Papa who worshiped me as he did his God.

Who added that, do you think? 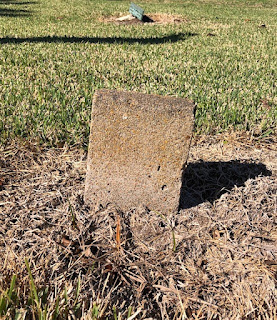 There were a number like this – simple stones to mark the place.
Nothing on them. 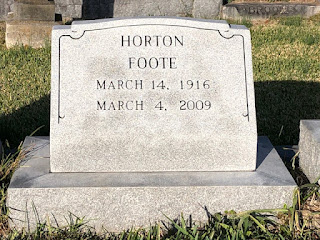 There were the markers of famous people. 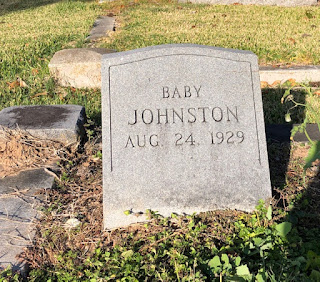 And, some who were not.

And, then I walked home.