The world around me has been quiet over the past several weeks.  Mildly busy days filled with completely unexciting, uninteresting stuff.

And, by the way, there’s nada on TV either. 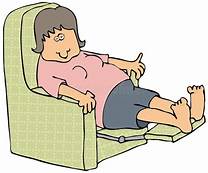 I did spend Friday and Saturday cooking (wahoo, oh goodie, wow, interesting).  It is very difficult for cook a meal for one without a weeks’ worth of leftovers.  So, every 6-8 weeks I spend a couple of days cooking and freezing dinners in one meal portions.  Then, I spent a couple of days rearranging furniture, closets, and plants.  And, I’ve worked on the new cross stitch pattern. 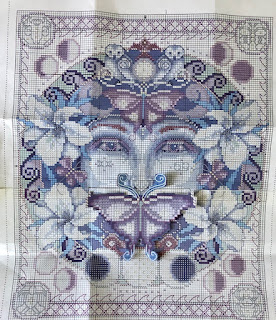 It may defeat me.  I’ve ripped out as much as I’ve put in.  I made a few changes to the original pattern and about half  of it will be bead work. Right now, I'm working on her crown.  Possibly I will be working on it this time next year too.  If I ever get past the owls, I'll post a picture of the actual work.

Anyway, other than doing those completely uninteresting things, I’ve been reading.  I’ll share books another day.  But, since Sunday afternoons can be a quiet time, here’s a story for you . . . .

Jumbo Reilly was a giant of a fellow with the build and strength of a grizzly bear and a grumpy nature to boot.  He was the roughest, toughest fellow in Portland back in the Wild West days and he soon found himself a job as a bouncer at Gus Erickson’s saloon, which was famed both for its ferocious fist fights and for having the longest bar in the world.  Jumbo soon earned a reputation as the meanest bouncer in the city, and nobody – not even miners bound for the gold fields of California or sailors who’d been aboard ship for three years without settin’ eyes on a lady - messed around more than once with Jumbo.

'Course, there's an exception to every rule.

There was one fellow who took on Jumbo Reilly the bouncer more than once.  Although, turns out it was a sort-of accident.  He was a sailor-boy just back from Shanghai; just a runt of a fellow, skinny as a rake who couldn'ta weighed more than a hundred pounds.  Well, this fellow got himself so drunk on whiskey that he started getting loud and obnoxious and pestering the other customers what were drinking in the saloon.  So Jumbo lifted the tiny lad right off his feet and bounced him out the main door.

A few minutes later, who should stroll in the side door of the saloon but the tiny little drunken sailor?  He made a beeline for the bar, and had almost reached it when Jumbo lifted him up and bounced him right back outside.

To Jumbo's surprise, the sailor was back again a few minutes later, this time walking through the door on the far side of the saloon.  ‘Course, he ran smack dab into Jumbo as he was crossing the floor and Jumbo sent the teeny drunkard sailing head over tail right back the way he came in.

Well, Jumbo thought he’d got rid of that pesky fellow at last, until five minutes later when he saw the same sailor boy rolled into the saloon through the back door!  Jumbo went to meet him, shaking his head in admiration for the tiny lad’s stubborn persistence.

As Jumbo lifted him off his feet for the fourth time, the drunken sailor boy blinked blurrily up at him in dawning recognition and said:  “Jehosephat man! Are you the bouncer for every bar in town?”

Have a nice evening! 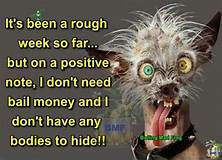