Well – I finished the paint project. 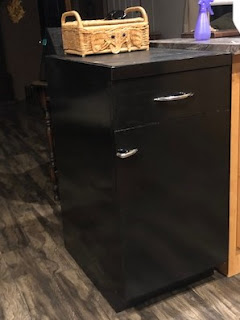 There it is – a nice shiny black. 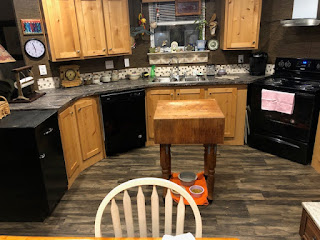 And, here it is in the kitchen.

Daylight Savings Time started this past weekend.  Ugh, ugh, ugh, ugh, ugh!!  I don’t care too much for DST.  Being a morning person, I want it to be light by 6:30am, when I get up.  And, I’d like to know who, at least here in my part of Texas, goes outside to enjoy the 98+° heat during the 5 summer months we have any time after 8am!  Nope, nope, nope – should be getting dark by 7:30pm latest.

March has, so far, lived up to its “come in like a lion” reputation.  It has been windy for the past two weeks.  And, I think the next two are supposed to be rainy.

On another note – some of my plants are beginning to come back from THE IRON WINTER OF 2021.  The Star Jasmine is putting out new leaves, as well as the Mallows.  The Confederate Rose is coming back from the root.  Still nothing happening with the other baby trees I planted last September but, it’s early still.

And, this little guy has bloomed – first time ever!  I’m not totally sure what this is though it may be Senecio longiformos or Paintbrush Flower. 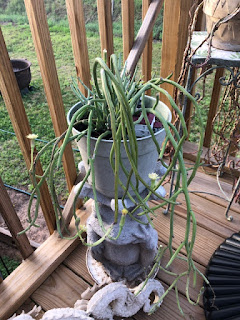 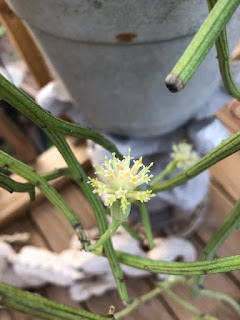 On to the Nonsense part

I had to look it up.  It seems that the Living Sign is a sign that spells out “Canisteo” (as in Canisteo, NY) using 250 trees on a ridge above the town.  And, traditionally turkey vultures return there on or around St. Patrick’s Day. 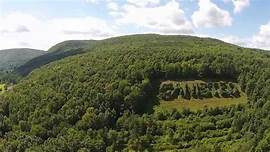 I guess better there than downtown.

This week take some time and read your favorite Shakespeare couplet.  Here’s mine . .

Round about the cauldron go;
In the poison’d entrails throw.
Toad, that under cold stone
Days and nights has thirty-one
Swelter’d venom sleeping got,
Boil thou first i’ the charmed pot.
Double, double toil and trouble;
Fire burn, and cauldron bubble.
Fillet of a fenny snake,
In the cauldron boil and bake;
Eye of newt and toe of frog,
Wool of bat and tongue of dog,
Adder’s fork and blind-worm’s sting,
Lizard’s leg and owlet’s wing,
For a charm of powerful trouble,
Like a hell-broth boil and bubble.
Double, double toil and trouble;
Fire burn and cauldron bubble.
Scale of dragon, tooth of wolf,
Witches’ mummy, maw and gulf
Of the ravin’d salt-sea shark,
Root of hemlock digg’d i’ the dark,
Liver of blaspheming Jew,
Gall of goat, and slips of yew
Silver’d in the moon’s eclipse,
Nose of Turk and Tartar’s lips,
Finger of birth-strangled babe
Ditch-deliver’d by a drab,
Make the gruel thick and slab:
Add thereto a tiger’s chaudron,
For the ingredients of our cauldron.
Double, double toil and trouble;
Fire burn and cauldron bubble.
Cool it with a baboon’s blood,
Then the charm is firm and good.

Finally, today we can all celebrate . . .

Brutus Day aims to promote recognition of the fact that betrayal, backstabbing and dirty politics aren’t by any means a thing of the past, and are as widespread and tactical in our modern, corporate and political lives as they were in the forums of ancient Rome. Watch your back, avoid office politics, and look out for your friends!

Just a bit of possibly useless information - the ancient Romans didn’t number their calendar days in order from the first of the month to the last. Instead, they counted backward in relation to three days: the calends, nones, and ides.  The Roman general and statesmen Julius Caesar was assassinated by conspiring senators, including Marcus Brutus (hence it being Brutus Day also), on March 15 in 44 BCE.  Caesar had become a dictator after causing a civil war.  His rule, and murder, ended the Roman republic—and changed the course of history.  Shakespeare (ah – Shakespeare Week also) dramatized the assassination of Julius Caesar in his play.  Early in the play, a soothsayer warns Caesar to “Beware the ides of March”.

So, today is considered by many to be a doom day, an unlucky day, and certainly a day to take care. 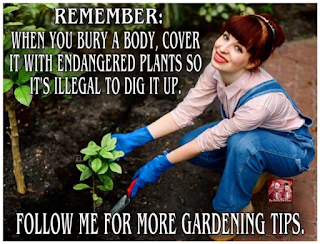