So, Did You Know?, for us here in Gulf Coast Texas, this past December of 2018 was one of the top rainiest months of recorded time?  Something like 9 or 10 inches of rain just in December depending on where measurements were taken – Houston probably got a little more, Wharton a little less.  Well, good thing, bad thing.  Obviously we didn’t have to worry about lack of moisture for plants or house foundations.  Plus, the rain and clouds keep temperatures mild (no snow or, god forbid, ice).  All good things. 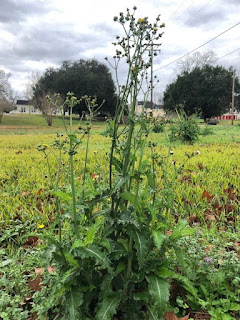 The bad side of the coin?  The “spring” (hellloooo – this is January – winter) weeds have already jumped up trying to see how annoyingly fast and tall they can get.  My yard is awash in chickweed, plantain, lambsquarter, cleavers (aka: "bort", bedstraw, goosegrass, catchweed, stickyweed, stickybud, robin-run-the-hedge, sticky willy, sticky willow, stickyjack, stickeljack, and grip grass-god I hate this stuff), spiny-leaved sow-thistle (another one I really hate a lot because you cannot just pull it up bare handed) along with others I’m not as opposed to like wood violets, henbit, and fleabane (well not as opposed to if they would just stay few instead of trying to populate the known universe).  Yes, I know many are considered herbs and have a variety of medicinal and culinary uses but they are really very annoying weeds mostly.

I’m not inclined to use anything like weed and feed (my grass is perfectly healthy, thank you very much, – it just realizes it’s still WINTER and therefore it is dormant).  And, I use herbicides very sparingly in general.  Plus, as soon as it gets hot (probably March if this “winter” is any indication), the weeds will be choked out by the grass or die of the heat or both.

As I was thinking I would have to pull out the mower (in January – winter!), my two Texas grandchildren called to say they were coming over for the weekend for a Work Day.  Yea!  Wow!  Woowoo!  And, work they did.  When all was said and done, the yard had been mowed, two trash trees cut down, all the wet leaves and small branches on the roof swept off and up, all the yard refuse stacked neatly by the street for city pick up, and a few heavy items moved from here to there. 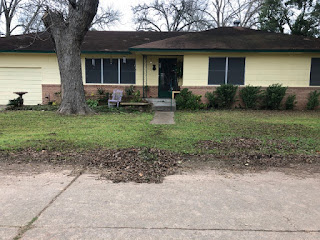 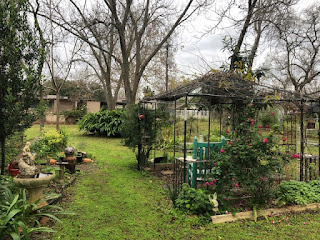 And, as a reward, we all got to watch a scary Netflix tv show.  (Well, actually, I think Vic watched the inside of her eyelids and I kept my eyes on my current cross stitch project – Bri watched).  It was a wonderful weekend.

Hmmmm – what else.  Well, the Herb of the Year for 2019 is Anise hyssop.  This very fragrant, butterfly/bee attracting plant is a member of the mint family.  It will grow in bright shade but according to herbalists, prefers sun (though not our summer burn-it-to-a-crisp sun).  All my mints are planted together in a bright shady place close to the house (yes, yes I know – shouldn’t plants mints all together – they get chummy and the strongest scent prevails, but …….).  It makes a beautiful flower.  And, it has all sorts of uses, like - 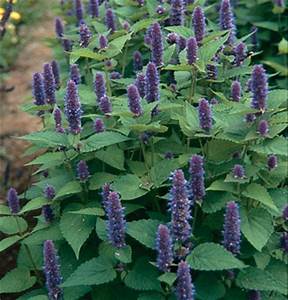 The flowers are edible with a lighter anise flavor than the leaves as an addition to a salad.  Or use the leaves in cookies or cakes or breads.
The leaves and flowers make a black licorice flavored tea which ideal for treating colds and relieving congestion.
Hyssop is a traditional ingredient in absinthe (a distilled, highly alcoholic beverage).
Put fresh or dried leaves in a square of cheesecloth for a Bath Tea.  The scent will help calm frazzled nerves and traditionally it was also used for pain relief for sore muscles.
Put the leaves and flowers in a dream pillow to stop nightmares and encourage sweet dreams.

What else???? Well the Flower of the Month for January is Carnation.  I can’t grow carnations here – too hot and humid.  However I can grow a relative – Pinks! (or dianthus).  They’re pretty, bright, like our sun, will grow in bright shade, and have a spicy scent.  All good. 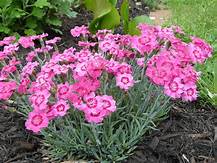 Oh – and another name for this flower, used during the fifteenth century, is gillyflower – I really like that one.  Pinks attract bees, butterflies, and hummingbirds.  They’re very hardy and are grown as an ornamental rather than as a medicinal herb.  Though there was a time when they were used to treat illnesses in both humans and animals.  And then, there’s this little legend -

The name dianthus was given by the Greek botanist Theophrastus (c. 371 – c. 287 BC). Dianthus means divine (dios) flower (anthos).

The relationship to the divine might reference Artemis (Diana) and a story portraying the irrational anger of a goddess. Artemis was hunting when a shepherd playing an instrument frightened her quarry. In a fit of anger, Artemis tore out the shepherd’s eyes. However, her anger passed like a summer shower and she immediately felt sorry for her anger. Her remorse resulted in beautiful flowers that bloomed in the place of the man’s lost eyes..