Who’d athought!  And in San Antonio to boot.

In the recent past, I drove over to San Antonio to see my oldest granddaughter.  Of course, it was a wonderful visit.  Now, when you think of San Antonio, you generally think of the Alamo, the River Walk, Texas’ battle for independence, and all the Mexican heritage and influences.  My guess is that you don’t think about Scotland.  And, yet in the spring the SA Highland Games holds its annual festival. 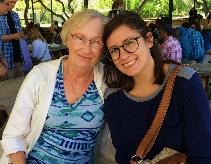 This was our destination.  The festival takes place in early April, so it was a bit chilly that morning when we arrived.  Kilts were in evidence everywhere – it was easy to spot the tourists (they were all clad in jeans and jackets).  There were booths set up for various clans so visitors could sort of “check-in” or check to see if their name was included in a specific clan.  Clans developed a territory based on those living within its boundaries who came to accept the authority of the dominant group.

My own family has a strong clan affiliation through several different ancestors.  This would be the Abbotts (Americanized from McNab – child of the Abbot) badge. 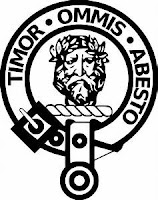 There was the opening parade – with, of course, bagpipers (I love bagpipes!!) 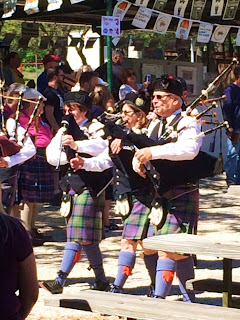 We watched the hard-working sheep dog competition.  I was supremely impressed with those dogs.  One dog would keep a flock of 10 or so sheep in order, in a group, and herded to a specific area.  The human shepherd issued commands by whistle or hand gestures.  I thought of my little dog at home – probably not shepherding material. 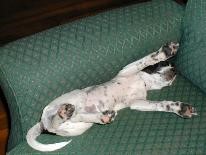 We watched the Highland Games for a while.

The Stone Put - using a 25-pound rock, the thrower is allowed to use any throwing style so long as the stone is put (thrown) with one hand, with the stone resting cradled in the neck until the moment of release. 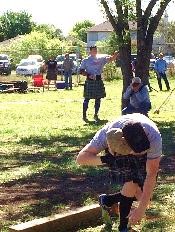 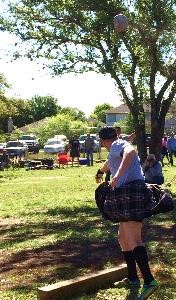 The Weight for Height Throw. These women attempted to toss a 30 to 50-pound weight with an attached handle over a horizontal bar using only one hand. 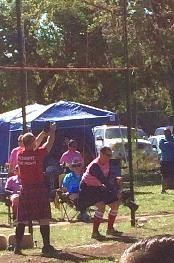 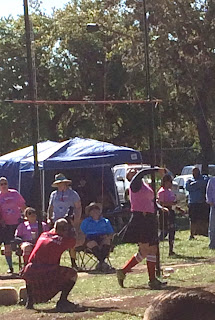 If you look above the bar, you’ll see


the weight as it flies over.

These were some robust women, let me tell you.

There were a number of men dressed in formal regalia although most were dressed in more “working” kilt attire.  I had to wonder, as chilly as it was - did they have on thermal undies??? 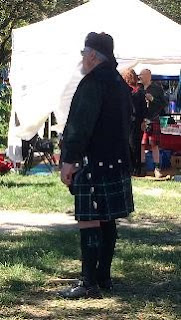 It was a very good time   You should go sometime! 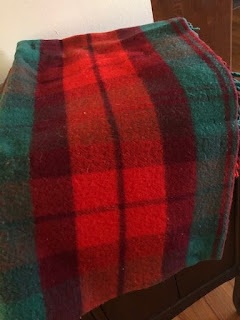