Lions and Tigers and Alligators, Oh My!


Recently a friend asked me if I’d been to Brazos Bend.  No, I had not.  We should go one day.  That day was earlier this week. 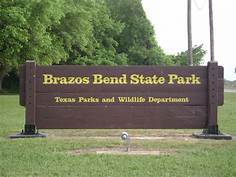 Brazos Bend State Park is an absolute treasure in the huge cosmopolitan area that makes up greater Houston.  It’s located on FM 762 in the Needville area and is close to Houston, Sugar Land, Katy, Galveston, and Wharton.  It is 5000 acres of peace and stress relieving beauty.  I almost said peace and quiet but quiet it is not.  There are all sorts of birds chirping, bull frogs calling, the buzz of insects, and the occasional alligator bellowing but there are no truck, car, or train noises.  Nice. 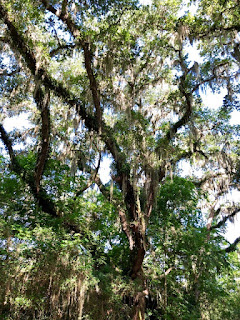 There is plenty to do there - biking, fishing (no license required), hiking, birding, canoeing, camping, star-gazing (the George Observatory is located at the park), free programs, and guided hikes.  There are hardwood forests and wetlands consisting of many lakes and swamps.  Plus, they have some of the best oak trees I’ve seen in a while and all of them are draped in Spanish moss and a few covered with ferns.  Actually, I found one I’d like to take home with me.  Next time I’m bringing a truck! 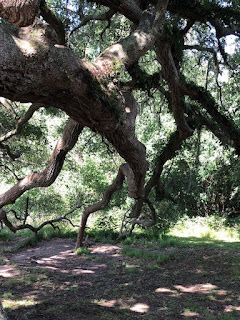 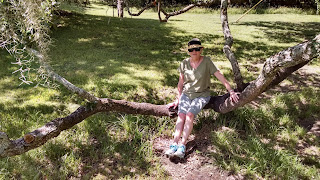 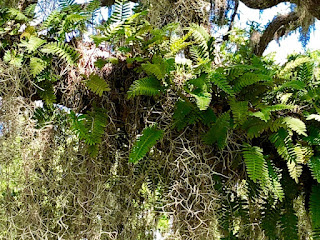 We hiked around 40 Acre Lake.  There were all sorts of birds – herons, ibis, egrets, cormorants, along with many different ducks and perching birds. 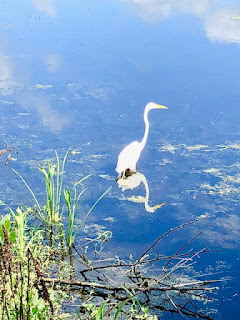 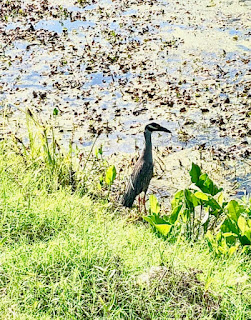 In addition to birds, there were alligators!  Like, a big bunch – actually a congregation of alligators! 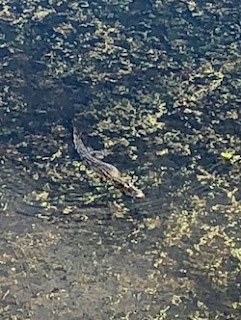 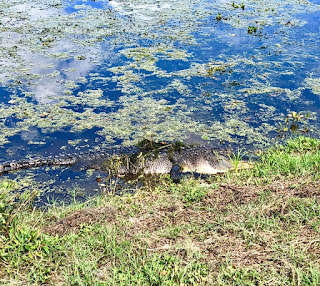 Side Bar:  Did you know …….
1 Adult American alligators measure 11-15 feet in length, and can weigh up to 1000 lbs.  2 They are considered apex predators and consume fish, amphibians, reptiles, birds, and mammals.  Generally, they eat smaller prey that they can gulp down in a single bite.  3 Young are protected by their mother for about 2 years.  4 They will bask on land and will climb trees if there is no shoreline available (oh goodie, watching for alligators in trees).  5 While the American alligator was on the endangered species list, it has made enough of a comeback that it is now a protected species.  6 And, they tend to be less aggressive towards humans, but it is best to not feed, tease, or aggravate them!

As we were walking along the path, Bobby stopped me and said – what’s that up there?  Uhhh, a branch laying on the path.  Nope, sez he, I’m pretty sure it’s an alligator.  I slowed down walking.  As we got closer, the “branch” jumped up and RAN (quick like a bunny) to the water (on my side of the path) and slid in.  Oh my!  A few minutes later, he again said – look – there’s another one.  This one was laying quietly just beside the path in the grass.  I stopped walking.  He walked on. 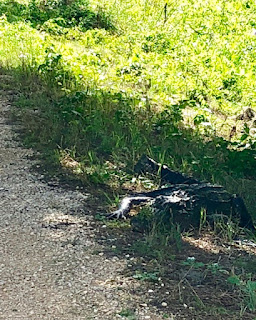 So, here’s the thing – I don’t like lizards – not little ones like this ……. or big ones like that.  Yes, I know – odd because I really do like dragons BUT, I don’t think dragons are even remotely related to lizards and that’s a whole other conversation! 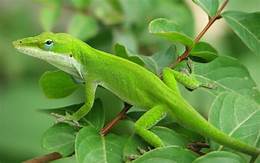 He motioned me forward.  And, not wanting to be perceived as a scared little baby, I walked (as far from it as possible and still be on the path) right past the alligator snoozing alongside the path for the humans.  Was I brave or what! 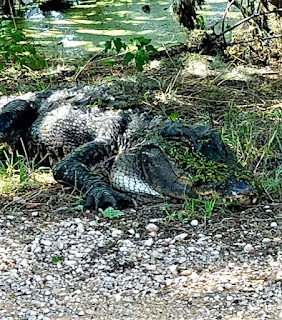 A little later we hiked to one of the visitor centers.  It’s a very interesting place and there was a volunteer to answer questions along with a park ranger.  The place has all sorts of skeletons and general information with pictures on many of the things you can see there at the park in the way of animals, snakes, wildflowers, birds and, of course, alligators. 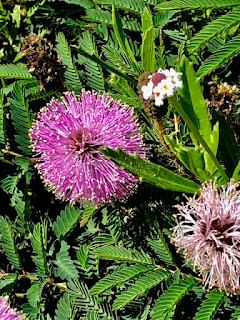 There were also glass cages with various types of snakes and one on the counter with a tarantula in it.  (Snakes and spiders don’t bother me – just lizards)  And, the park ranger was holding a baby gator and showed me how to pet it.  Which I did!  Go me! 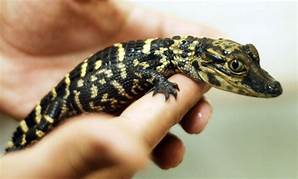 If you haven’t been to Brazos Bend Park, put it on you list of places to visit. 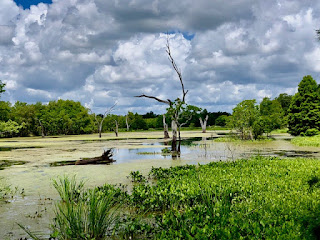 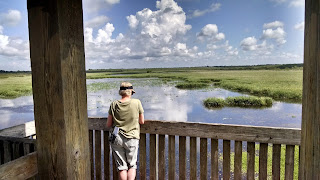