I’ve spent the past several weeks outside working to get the yard in it’s “pulled together” state.  I work like a wild woman March to June because with June comes really truly summer.  Summer here is usually hotter than the hinges of hell.

So, do you ever wonder where certain descriptive terms come from – “hotter than the hinges of hell”.  I’m pretty sure no living person has any idea even IF there are hinges on hells door and much less if they are hot or no – could be freezing cold.  One source says “Colloquialism of the American South, "Hotter than Hell's Hinges" is the ultimate superlative for a subjective judgement of heat.”  Hmmmmm interesting though it still doesn’t really tell us anything.  Fact for the useless info file.

Oops, side-tracked there.  By the time June rolls around, it is usually much to hot and humid, for me at least, to work outside.  I mean, it’s not unusual in June to walk out at 6am and already have the temperature sitting at 80° with 90% humidity.   So, I’ve been working at getting flowerbeds cleaned out, things labeled, things planted, things trimmed, weeds pulled, and basically to a point where I don’t have to worry with it quite so often. 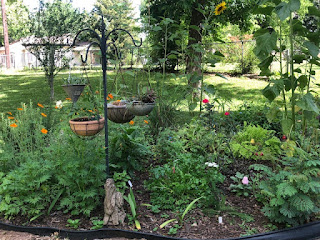 One of the things I did today was to pull up the squash plants.  Sadly, they had been attacked by the perfidious squash bug.  I did get one nice sized spaghetti squash, so not all was lost.  Anyway, I needed the space for something else. 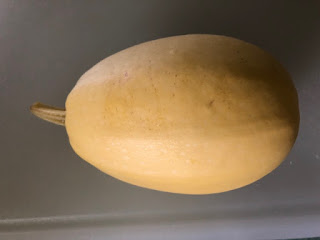 While working, Morgan, who was sitting in the yard keeping an eye on the dastardly squirrels, gave a yip and ran inside.  Hmmm – bee bite maybe.  A few minutes later she came to the door, looked out cautiously and ran over to me.  I was sitting in the grass getting ready to plant Milkweed.  She came right up close, looked me in the eye and waited.  This is her way of telling me she’s going inside and not coming back out.  Which she did. 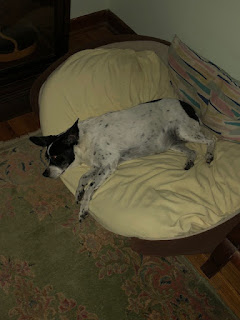 In between, getting the yard settled, I’ve been busy with all sorts of other things.  I believe I’m mentioned that I’m a member of the Wharton Garden Club.  I joined in 2005, shortly after moving to Wharton.  In the 13 (omigod, that just can’t be right!) …. In the past 13 years it’s grown from a small group to a very large group of men and women interested in gardening.  We have speakers that talk on different topics.  Take field trips.  And, once a year have our fundraiser – a plant sale.  Many of the members start months in advance, potting up plants from their yard for this sale.  This year our sale was held last Saturday. 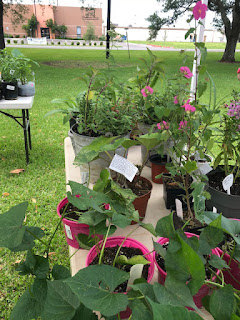 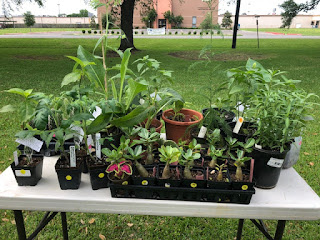 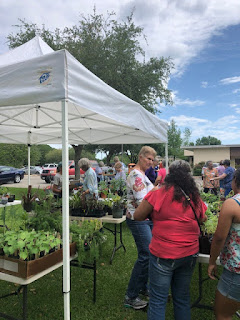 It was very successful with many, many dozens of plants for sale then sold and only a very few left when all was done.  I did swear that I WAS NOT going to come home with a car full of plants.  (My yard goals this year included the promise of “No New Flowerbeds … No Enlarging Existing Flowerbeds … No more Potted Plants.”  OK that may have been completely unrealistic although I haven’t enlarged or made any new flowerbeds (2 out of three’s not too bad).  And – I was sort of successful – came home with only six plants of which 3 had to find a home in the ground; the remainder staying in pots.  (I shall probably be complaining about those additional potted plants come next November and I have to move them inside.)

My job during the plant sale was to be available to answer questions, which mostly I could.

Then, this week we had our May meeting.  Ta-Da! - I was the speaker.  And, I was completely not ready.  Never mind that I’ve known for a year that I’d be doing the program in May.  I tend to work on it later rather than sooner.  Still, I’m pretty comfortable giving talks on plants – my topic was “things that survived”, that is survived the 2017/2018 year of tornado, hot and dry summer, flood, more hot summer, snow, and ice – so I talked about several plants that surprised me by not dying, their usefulness and benefits.  No one threw rotten tomatoes or booed, so I guess it went well enough.

How’s things with you? 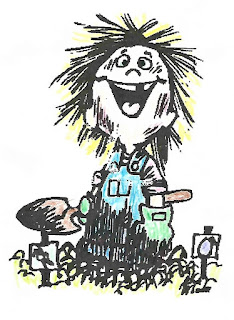