I often have odd and sometimes unwelcome visitors to the house and yard.

I have an armadillo that comes digging around in my front flower bed occasionally.  Really annoys Morgan who keeps watch out the front windows.

Armadillos mostly eat insects – ants, beetles, snails and the like – which is good.  However, they are world class diggers and have no problem digging a borrow 10+ inches wide and up to 15 feet deep with tunnels going all directions.  Few armadillo facts??? – well, they have poor eyesight and good hearing, they always give birth in fours and they like to swim.  However, no thanks – I have enough problems getting things to grow in that particular flowerbed without someone always digging it up.  I usually chase that one off. 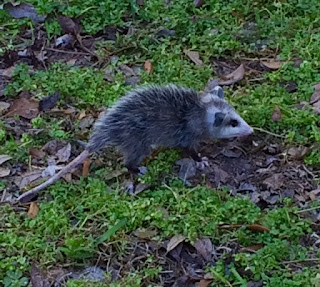 Then, for a while I kept seeing, over the fence in the open yard cattycornered to me, a large possum that looked diseased.  Had lumps all over it.  Had to get the binoculars out and look again.  A mama covered with babies.  The Opossum is the only North American marsupial.  The mom possum carries her babies in a pouch until they are 1-2 months old and then on her back for another 2 months whenever she leaves her den.  Some months later after seeing the mom, this little guy came visiting the yard.  They also eat insects, snails, berries, fruit, grass and other stuff.  They will actually “play possum” when threatened by mimicking the appearance and smell of a sick or dead animal.  I don’t mind them – they eat BUGS! 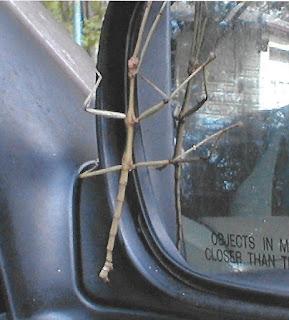 One day I went to get into the car and found this guy on the mirror.  Kinda makes me think of Bowtruckles.  Walking Sticks are just weird.  They can shed and regenerate their limbs to escape attacks by predators.  They are a nation of Amazons, able to reproduce almost entirely without males.  They don’t bite but can vomit or “bleed” a foul-smelling substance.  And, when all else fails, they can play dead.  They eat leaves but not all types of leaves.  If you capture one for a pet, you’ll have to offer different things until you find the right leaf – and they have to be fresh leaves. 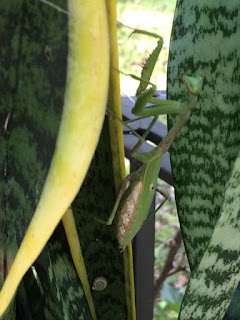 Then again, while wandering around the yard, I found this guy.  A Praying Mantis – I think they are aliens from another galaxy, far, far away.  They are unique in that they can turn their heads 180° and look over their shoulder at you.  Yes, it's true, the females do cannibalize their sex partners – and sometimes will behead the poor guy before they've finished consummating their relationship.  They're often considered beneficial insects however, a praying mantis is just as likely to eat a bee that's pollinating your plants as it is to eat a caterpillar pest.  They have two large, compound eyes that work together but just a single ear, located on the underside of its belly 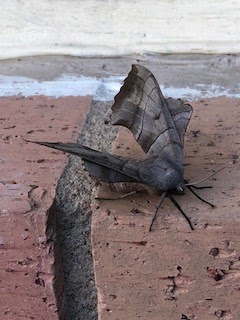 This one was new.  While I have a large number of chrysalis and cocoons everywhere, I’ve never seen a Hawk Moth hanging around before.  They are known for their hovering and swift flight patterns. They are pollinators for flowers such as orchids and petunias.  They produce loud chirping or squeaking sounds.  They have the world’s longest tongues of any other moth or butterfly (some up to 14 inches long).  The caterpillar is the tomato-growers nemesis – the green hornworm. 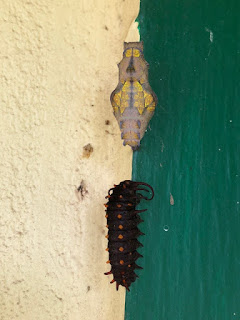 And, finally, I have these guys all over the house.  They are going to be Pipevine Swallowtail Butterflies.  The caterpillars are all over my Dutchman’s pipevine.  Which is fine because the vine always comes back.  And, the butterflies are beautiful! 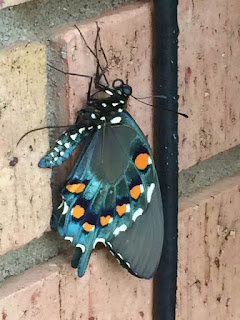