……. and Tarragon (that is, Texas Tarragon)

Tarragon is, by far, one of my favorite herbs.  But, the biggest problem for me with Tarragon – I cannot grow it here.  French Tarragon (which is the one most recommended used for cooking) doesn’t like our heat or humidity.  And, so, I went for the best alternative – 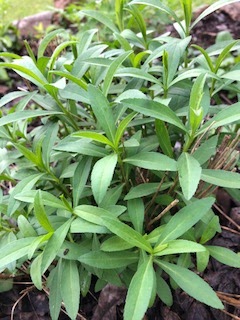 This is a very old herb which is native to Central and South America and has been used as a culinary and medicinal herb for more than a thousand years.  For all its similarity in flavor to French Tarragon, it is not related at all.  It is a member of the Tagetes family and is a close cousin to marigolds.

This perennial has an anise/liquorice-like flavor and is a little sweeter than French tarragon.  Use it the same way though – asparagus, broccoli, beef, fish, mushrooms, peas, carrots, chicken, rice, eggs and in sauces, soups, butters, and vinegars.  Because the leaves break down quickly, it is best to add MMM at the end of a long cooking cycle.  The one drawback to using dried MMM – it doesn’t hold its flavor well (keep dried MMM in a tightly capped glass container away from heat and light; discard after 3-6 months).  Best to use it fresh.  The good thing about MMM – it grows very easily and well here pretty much year round.

Mexican Mint Marigold will grow in any average garden soil. It’s likely to freeze so keep it well mulched (5 or 6 inches worth) from fall to the following spring.  Plant it in full sun (even our full sun).  Plants can grow to 15 to 20 inches in height.  It is somewhat drought tolerant but will grow best with regular watering.  It will produce small, bright gold-yellow flowers summer through fall.  Put the flowers in a salad to add color and flavor.  Or, use them to produce a nice yellow dye. 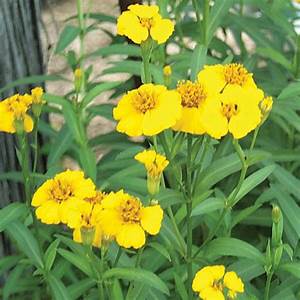 I’ve had MMM in one garden or another for years.  During THE GREAT FLOOD OF 2017, it sat under water for several days.  And, when the water drained away, it was gone.  Not even a soggy stem was left.  Sigh.  But, this spring, it popped right up out of the ground and is growing like mad.  Yea!

In addition to being a great culinary herb, MMM is also a good companion plant for beans, tomatoes, kale, and potatoes.  It attracts bees and butterflies and will help deter various beetle and weevils.  It can also help reduce the number of harmful nematodes in the garden soil.

In addition to its use as a culinary herb, MMM has been used medicinally for equally as long.  Legend has it that the ancient Aztecs administered it to their sacrificial victims before they were killed. It was believed to have sedative and psychotropic effects.  True or not, it was used in the way back years for the treatment of upset stomach, to stimulate appetite, as a diuretic, help lower blood pressure, to treat gout, the common cold, colic, malaria and non-specific fevers.  A poultice of the leaves was applied to snake bites to draw out the poison.  A tea made from Mexican Mint Marigold is reported to increase the strength and stamina in long-distance runners and other athletes, acting similarly to caffeine in coffee.

According to one source, if a stem falls over, it can root itself into a new plant.  I’ve not tried to stem root MMM but I think I’ll take a cutting and see what happens.  I’ll let you know. 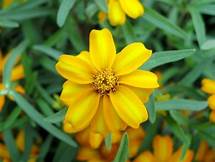