Tansy and Toadflax and Tarragon

Tansy is a very surprising herb.  I planted mine spring 2017 and it grew pretty well last year through the very long, very hot, very dry summer (that started in March!).  Then came the GREAT FLOOD OF 2017.  The backyard flooded.  My plants were underwater or just barely above.  Surprisingly, the Tansy must have held its breath under the water because when it all drained away, I was amazed to find the green Tansy perfectly happy. 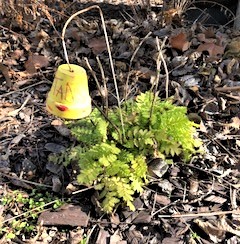 It is a lesser known perennial herb with an attractive yellow button flower. Tansy is heat and drought tolerant and requires almost no attention (which is why it did so well during the long, hot, dry).  The flowers usually bloom in late summer or early fall and are long lasting as well as pretty. 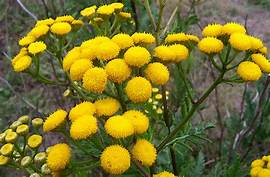 This plant originated in Europe and was probably brought over by wise-women because of its medicinal properties.  It was used as a treatment for fever, measles, rheumatism and as a means to help, both, conceive a child and to induce abortions. Tansy was thought to have the added Lenten benefits of controlling flatulence brought on by days of eating fish and pulses (a legume) and of preventing the intestinal worms believed to be caused by eating some fish.  Splashed on the face, it was used to lighten and cleanse the skin.  In the 19th century, it was thought that bathing in a solution of tansy and salts would cure joint pain.

It was packed into coffins, wrapped in funeral winding sheets, and tansy wreaths were sometimes placed on the dead to act as a type of embalming.  During the American colonial time, meat was frequently rubbed with or packed in tansy leaves to repel insects and delay spoilage and it was frequently worn in shoes to prevent malaria.

The one use that has remained constant to today, is it’s use to repel bugs.  It makes a great companion plant; the strong order of the leaves seems to be something bugs just don’t like.  Plant it close to beans, cucumbers, squash, corn, roses, raspberries, peppers and potato.

One important note – Tansy essential oil is poisonous.  Tansy plants can vary widely as to the amount of volatile oils they contain. One plant can have almost none while another may be very dangerous. It’s impossible to tell the potency of a plant you harvest yourself without professional analysis, so it should be used extremely carefully. 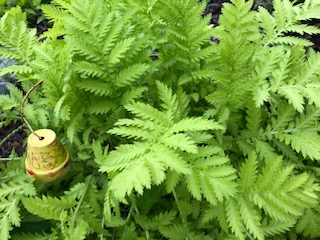 Still, Tansy is great in flower beds as borders, edging, or in clumps. The flowers are nice in bouquets and dry well for arrangements.  Dyers use it to produce a golden-yellow color.  And the leaves can be used to make an insect repellent.  Pretty good for a little know herb. 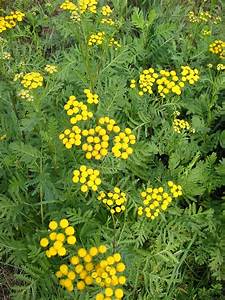