Last September during THE GREAT FLOOD OF 2017, my sister and brother-in-law stayed with me until their home (which flooded) was livable.  It worked well – they both went off to “work” each morning and were back in time for dinner.  I like to cook so it was nice.

While roaming around the grocery store looking for something to fix for dinner, I was drawn to a display of Spaghetti Squash.  Never had it.  Never fixed it.  Still, how hard could it be. 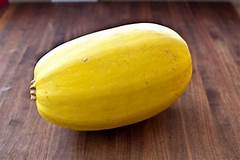 If you’ve never had it, Spaghetti squash is large, oval and has an appearance similar to that of a melon. Its exterior rind and skin is firm, smooth, and depending upon variety can vary from bright canary yellow to pale yellow.  It’s best known for its unique flesh that separates into long, translucent strings that resemble angel hair pasta. 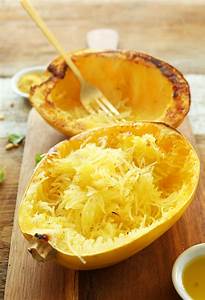 So, I bought one for dinner.  Read a bit on how to prepare, decided on a recipe and fixed it.  Not too bad.  And, I kept the seeds (gardener here, you know).  And planted them in March.

In case you don’t know, squash is one of the oldest cultivated crops on earth, with archaeological data tracing their origins back 10,000 years ago in Mesoamerica.  They were famously one of the Three Sisters crops, cultivated by Native Americans, who eventually shared them with European settlers.  The Three Sisters, corn (or maize) beans, and squash are one of the best examples of companion planting there is.
Each of the sisters contributes something to the planting. As older sisters often do, the corn offers the beans needed support.  The beans, the giving sister, pull nitrogen from the air and bring it to the soil for the benefit of all three.  As the beans grow through the tangle of squash vines and wind their way up the cornstalks into the sunlight, they hold the sisters close together.  The third sister offers large leaves of the sprawling squash to protect the threesome by creating a living mulch that shades the soil, keeping it cool and moist and preventing weeds. 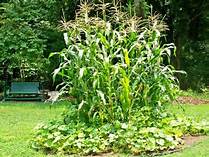 While it is identified as a vegetable, Squash is actually a fruit.  And it’s a big family including pumpkins, gourds, cucumbers, and summer/winter squashes. It is an extremely flexible fruit which can be eaten raw, baked, boiled, steamed, flattened into patties, fried, or included as a base flavor for soups. The seeds of squash are also edible. The shoots and tendrils of squashes can also be eaten as greens in a salad.

Remember – planted the seeds in March and …………. 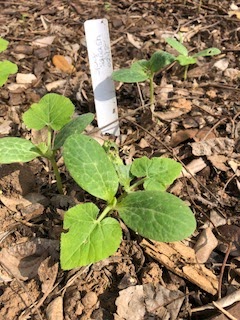 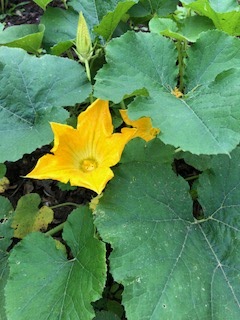 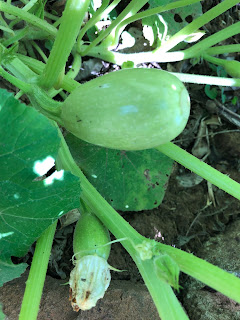 HA! Maybe the Farmer Gene didn’t totally pass me up!  Of course, I still have to keep an eye out for squash bugs or cucumber beetles, but so far, so good. 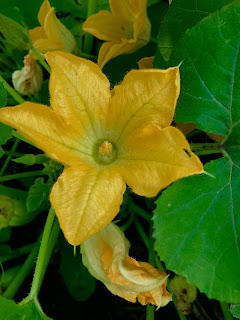