THE GREAT FLOOD OF 2017, which was devastating to so many, has brought about a 2018 spring of beautiful wildflowers and a huge growth in many other plants.  All things in my yard that weren’t totally killed off by the flooding, snow, and freezing temperatures have jumped up out of the ground thick and beautiful.  Of course, the annoying weeds, like sowthistle, chickweed, sticky weed (aka velcro plant, cleavers Sticky Willy), have also been thick and luxurious.  And annoying.

I don’t mind the 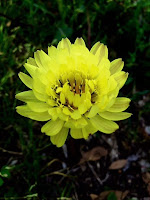 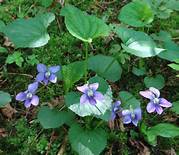 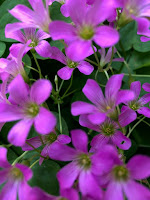 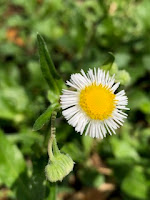 BUT, I worked hard to dig out sowthistle in previous years.  It’s an ugly persistent weed with thorns all over it.  And although it does have medicinal uses, an infusion can be used to treat diarrhea and the latex in the sap can be used in the treatment of warts, I mow it down or dig it up every chance I get.  The flood brought, I believe, my entire neighborhoods crop of seeds to my yard.  And there was sowthistle everywhere!  Aarrrggghhh! 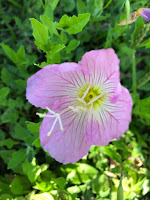 Of course, the flood brought new, more acceptable things also.  A patch of Evening Primroses (forever buttercups to me) has sprung up in my grass.  I can deal with that – and mowed around them.  Of course, they do grow quickly and next year there may be a larger patch but I’d rather have those than the plantain, which has also doubled in growth and ARE JUST UGLY!

Also, this spring, another wildflower jumped up out of nowhere.  Hmmm didn’t recognize it so I mowed around it.  Couldn't find anything in my various plant books or on the internet.  So, I asked several sources - What is this? 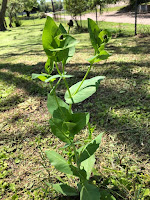 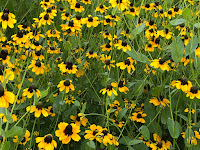 OK but mine don’t have any yellow petals.  They will.

I’ve watched other things “grow” as a result of the flood.  Many people have raised their houses  anywhere from 12 inches to four feet.  One house, raised four feet, looked very unsteady on its cement blocks.  Originally there was only a single stack of blocks every so many feet holding the house up.  And those stacks of blocks were all sorts of catawampus.  Made me nervous to look at it.  However I noticed yesterday that the new piers are now two blocks thick and have been straightened up, mostly.  I’d say the home owners have no intention of flooding again – ever. 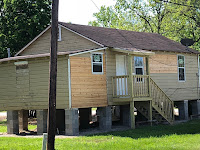 My next door neighbor had 3 feet of water inside their house.  Over the past several weeks I’ve watched as the work crew have raised it two feet.  May I tell you, it’s a scary thing to watch.  Often I’d see the workers crawling around under the raised house that was resting on new cement blocks, adjusting a jack here, putting a shim in there, and that just put my claustrophobia on high alert. 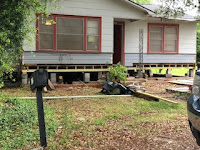 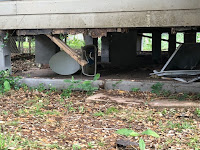 Of course all sorts of problems
might happen  – that would be the
toilet laying on it’s side underneath
the house.

It’s good to watch things grow, be it plant life or home life. 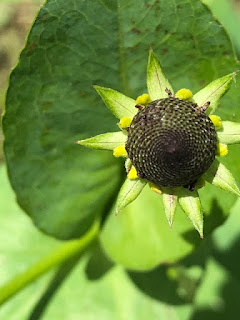