I have spent the past several days in the 17th century – working on my genealogy again.  Honestly – it’s like an addiction.  I think – I’ll just work for an hour or two because I also need to do this, that, and the other thing.  The next thing I know, it’s 6 hours later.  My neck and back hurt.  My eyes are about to drop out of my head.  And, none of the this, that, and other thing got done.  The next day, I’m already thinking about long past ancestors and dive right in.  Today – I didn’t even open the binder I’m working on for fear this day would slip past me too.  I did, however, learn some interesting stuff, for instance

Ninth great grandfather, William Moseley (1606-1665) though born in Lancastershire, England, worked in Delft, Holland for Merchant Adventurer, a company of English merchants who engaged in trade with the Netherlands.  He was very successful and able to take his family, bonded servants, jewelry and family paintings to Virginia in 1649.  Then, in Virginia, he was a Justice of Lower Norfolk.  Not interesting?  Well, I also found this – his will …

The last will and testament of William Moseley the elder, written with his own hand this 29th day of June, 1655.
Imprimis. I give and beueath my Soule to God that gave it, and my body to the earth to be decently buried at the discretion of my wife and children. Item. I give and bequeath to my Cosen William Cockcroft, a Cowe Calfe of a year olde. And to my grand child Corker a cowe calfe of a yeere olde. Item. I give unto my wife Susan Moseley my gray mare and furniture, and I doe likewise give her one negro woman called Mary with her Childe Besse, to be at her disposing during her life. Alsoe I doe give to my said wife Susan all the sheepe with the Increase thereof, together with all her wearing apparell and her Lifetime upon the plantation where she now lives. Item. I give to my sonne William Moseley, Eight hundred acres of land Lyeing and being as expressed in Bartho. Hodgkin's Pattent, and also I doe give to my said sonne William one younge Mare foale of months olde to him and his heirs for ever.  Item. I give and bequeath to my sonne Arthur Moseley, all that tract of land which I bought of Goerge Kempe, and moreover and above that all that land which was surveyed by Mr. Empero'r when I was in England, to him and his heirs forever. And for the residue of my Estate my debts being all first paid out, to be equally divided between my wife Susan, William and Arthur Moseley.  Signed by mee.  William Moseley, Senior, with a seale.

Still no?  Well, how about a picture –

There is actually a name for fear of this date – triskaidekaphobia.  Try saying three times!

On Friday, October 13, 1307, officers of King Philip IV of France arrested hundreds of the Knights Templar, a powerful religious and military order formed in the 12th century for the defense of the Holy Land.

Before Christianity cast its gloomy superstitions on Friday the 13th, this was a pagan festival day, devoted to guiltless indulgence in pleasure and love-making.  Both the number 13 and Friday are sacred to the Goddess.

Now, there are some people that just don’t like the number 13.  Because (maybe) …
The ancient Code of Hammurabi (one of the earliest and most complete written legal codes – about 1750 BC), reportedly omitted a 13th law from its list of legal rules.  Perhaps the reason some people refuse to sign legal documents on Friday the 13th. 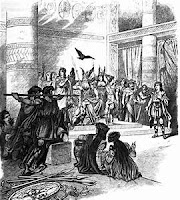 According to ancient Viking legend:  “Twelve gods were invited to a banquet at Valhalla. Loki, the Evil One, the god of mischief, had been left off the guest list but crashed the party anyway, bringing the total number of attendees to 13. True to character, Loki incited Hod, the blind god of winter, to attack Balder the Good, who was a favorite of the gods. Hod took a spear of mistletoe offered by Loki and obediently hurled it at Balder, killing him instantly. All Valhalla grieved. And although one might take the moral of this story to be "Beware of uninvited guests bearing mistletoe," the Norse themselves apparently concluded that 13 people at a dinner party is just plain bad luck.”  Giving birth to the superstition that when there are 13 at a dinner table, the first to get up from the table will die within a year.

What else??? Oh – last night was the full moon 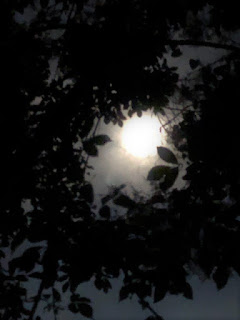 Now, here’s a quirky thing – Friday the 13th only happens between one and three times a year and it’s pretty unusual for the full Moon to line up with it exactly.  The last time there was a full Moon on Friday the 13th was in January 2006 and the next won’t occur until August 2049.

Last night’s moon was the Harvest or Corn Moon.  Time to bring in those crops.

When I went outside last night to see the moon, I noticed that the Night Blooming Jasmine was open and fragrant.  Actually, it isn't a true jasmine.  It's a tropical evergreen in the nightshade family.  It grows best in well-draining, sandy soil, preferably somewhere with a lot of space for its roots to spread out.  It does well in full sun (though, mine is planted in bright shade).  It is sensitive to cold and will freeze if not protected.  Here, mine will freeze to the ground but, so far, it comes back in the spring.  You can grow it in a container but will need to protect it during predicted freezes. 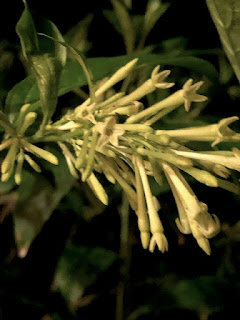 OK – I have to go to the grocery store next or the Demon Duo will set up a clamor claiming starvation diet tonight.