Part One:  Odd way to start off, I know.  Yesterday, Friday and Thursday were VERY TIRING DAYS.  I’m sure I mentioned that three more tree branches fell on the roof of my shed.  In order to do something about the problem, I had to clean up the yard on the east side of the shed.  It is a pain in the patootie too.  I never go over there (or almost never) except to clean it up twice a year – cut down all the trash trees, trim up the 4 o’clocks, the lantana, and anything else that needs to be done, all of which took a couple of hours to accomplish.  After everything was cut down/trimmed up, I made a million trips to the trash pile, cleaning up my mess.  That was hot Thursday.  Then, on hot Friday I thought to tackle the branches on the shed.  Behind the shed, it looked like this . . . 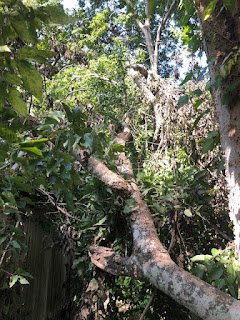 Climbing up on the shed (something that makes me really uncomfortable, specially when I'm alone)?  It was even worse.  So, I spent a couple hours on the shed roof, cutting off smaller branches with the hope that I might be able to shove those big ones off.  No, not even a little.  Obviously, it was all chainsaw work.  Next came a million trips to the trash pile, cleaning up my mess.  Then, my daughter and her boyfriend surprised me by coming by Saturday afternoon to help with the problem.  It was another couple hours work in the very hot afternoon sun for all of us along with the, yes, million trips to the trash pile. 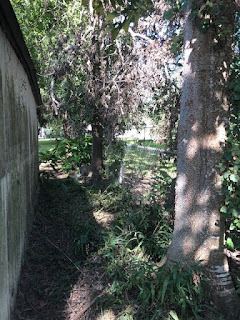 and, there’s nothing on the roof of the shed – yay!

Just so you know how much there was – the trash pile now looks like this  . . 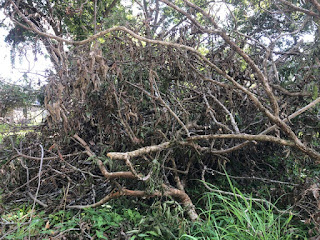 There’s still one more big branch that needs to be cut up and some smaller ones to be cleaned up but that’s easily manageable.  They left shortly after and by the time I showered, I was done, too tired to even hold up my phone, much else sit at the computer (the reason why this is a two parter).

This is the last day of National Storytelling Week.  Storytelling is an ancient form of entertainment.  And, in case you ever need a storyteller for some event or other, they can be found on line (who knew)!

Once upon a time, a young girl named Lisa often had to spend time alone at home at night, as her parents worked late. They bought her a dog to keep her company and protect her. At night, the dog slept under Lisa’s bed. 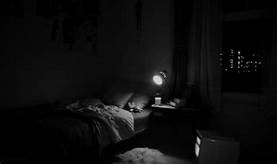 One night, Lisa was awakened by a dripping sound. She got up and went to the kitchen to make sure the tap was off. As she was getting back into the bed, she stuck her hand under the bed, and the dog licked it. Reassured all was well, she got back in bed.

However, the dripping sound continued, so she went to the bathroom and made sure those taps were turned off too. She went back to her bedroom and stuck her hand under the bed, and the dog licked it again.

But the dripping continued, so she went outside to check that all the faucets out there were off. She came back to bed, stuck her hand under it, and the dog licked it again. 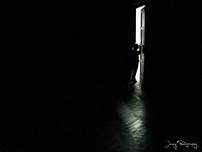 This time she listened and located the source of the dripping — it was coming from her closet! She opened the closet door, and there found her poor dog hanging upside down with its neck cut.

Written on the inside of the closet door was, "Humans can lick, too!"