I mowed some on Monday.  In the heat and humidity.  And, after a while, dragged my hot tired self into the house and was useless for the rest of the day.

With yesterday being errand running day, I planned to finish the mowing today.  Until . . . . I looked at the thermometer.  At 6am (that’s six o’clock in the morning when it is still dark outside), it was 77° with 86% humidity.   Oh ugh.

This is pretty typical for us this time of the year.  Hot, muggy and then another cool front arrives.  Actually, I think we’ve already reached the high temp for the day.

If it does cool down, maybe I’ll mow some this afternoon.

I attend yoga classes Monday evenings.  My yogi is very good.  The classes are challenging.  She gives us easy to goddamned hard poses.  That said, I will have to look like this before I can ever assume this position! 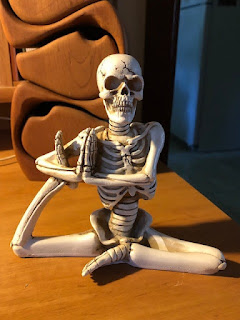 (A surprise Halloween gift from my oldest granddaughter, Vicky.
It may, however, remain forever sitting on my desk regardless the season!)

I think I’m going pumpkin shopping tomorrow.  Last year I waited until a couple days before Halloween to get my pumpkin-to-be-Jack-o-Lantern and none of the stores had any pumpkins – NONE.  It was a dark Halloween night with no Jack-o-Lantern to scare away the lions, tigers, bears and other BEASTS OF THE NIGHT. 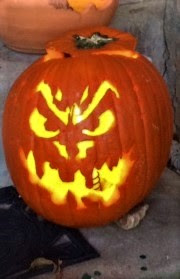 The Legend of “Stingy Jack”

Once upon a time there was a man, “Stingy Jack”, was his name and one night he invited the Devil to have a drink with him. True to his name, Stingy Jack didn’t want to pay for his drink, so he convinced the Devil to turn himself into a coin that Jack could use to buy their drinks. Once the Devil did so, Jack decided to keep the money and put it into his pocket next to a silver cross, which prevented the Devil from changing back into his original form. Jack eventually freed the Devil, under the condition that he would not bother Jack for one year and that, should Jack die, he would not claim his soul. The next year, Jack again tricked the Devil into climbing into a tree to pick a piece of fruit. While he was up in the tree, Jack carved a sign of the cross into the tree’s bark so that the Devil could not come down until the Devil promised Jack not to bother him for ten more years.

Soon after, Jack died. As the legend goes, God would not allow such an unsavory figure into heaven. The Devil, upset by the trick Jack had played on him and keeping his word not to claim his soul, would not allow Jack into hell. He sent Jack off into the dark night with only a burning coal to light his way. Jack put the coal into a carved-out turnip and has been roaming the Earth with ever since.

The Irish began to refer to this ghostly figure as “Jack of the Lantern,” and then, simply “Jack O’Lantern.” In Ireland and Scotland, people began to make their own versions of Jack’s lanterns by carving scary faces into turnips or potatoes and placing them into windows or near doors to frighten away Stingy Jack and other wandering evil spirits. In England, large beets were used. Immigrants from these countries brought the jack o’lantern tradition with them when they came to the United States. They soon found that pumpkins, a fruit native to America, make perfect jack-o’-lanterns.

So, as the header said – counting down – to Halloween!  Got your costume yet? 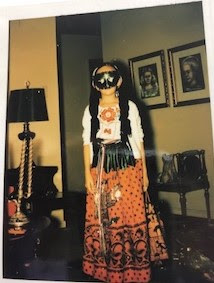 ps: thinking I won’t be mowing since this front has brought rain.  good for my potted plants and flowerbeds. bad for the grass (it will insist on continuing to grow).
at October 16, 2019