Tonight is Samhain, the time when the veil between this world and the next is the thinnest.  It is a time when long gone ancestors might be contacted.  Be careful though, it also is the time when dangerous spirits can also roam.  If you choose to try your hand at contacting via a Ouija Board, please take care.  Ouija Boards are not a joke, not a game. 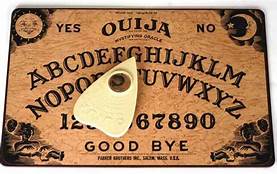 To keep the evil spirits from my door, I set about carving my jack-o-lantern today. 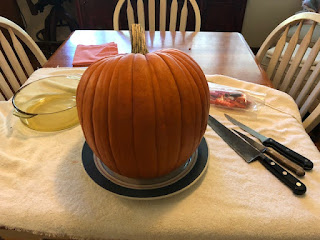 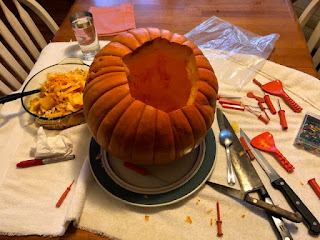 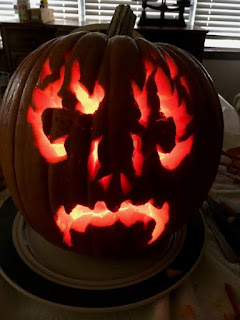 Once Upon a Time, some long years ago, a blizzard was raging fiercely as two brothers stumbled down the long road.  They were miles from any farm, and knew they had to seek shelter or freeze to death.  And so it was with relief that they spotted a saloon and pushed their way through the door.  Every eye in the room turned upon them, as the boys ordered coffee with the last of their money.  As the bartender went to fetch the hot drink, most of the regulars returned to their conversations.  But one man continued to stare, a massive butcher with a mop of red hair and a long red beard who was the worse for drink.  “You’re looking at me funny,” the butcher slurred, looming over the two boys.  “We weren’t looking at you,” said the older boy. “We were just warming ourselves by the fire.” 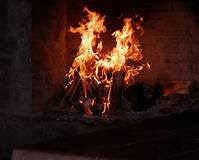 “Are you calling me a liar?” he shouted.  Around the room crowd grinned; they loved a good fight.  “No, not at all, we didn’t say that,” said the older boy quickly, waving his hands and accidentally striking the butcher on the arm.  That did it.  The butcher grabbed the boy by the collar. “No one hits me and gets away with it,” he roared and threw the boy headfirst into the huge fire raging in the hearth.

There was a moment of stunned silence in the saloon, and then the elder boy screamed in agony as the flames engulfed him from head to toe.  The younger lad shouted in terror.  The older boy stumbled out of the fireplace, as the little brother tried to beat out the fire with his small hands.  The butcher loomed above them, grinning sadistically as the flaming boy lost consciousness, his screams dying away.  “Your turn,” the butcher said to his brother.

The younger boy gasped in fear and fled for his life out into the raging snow. The boy’s little frozen body was not found until the spring.

One evening, a decade after the death of the two young boys, a burly man with a long red beard came strolling down the road, yes – the same one taken by the brothers’ years earlier. The butcher had heard rumors of a ghost but had discarded them as so much poppycock and tavern talk.  As he meandered down the road, he became aware that a silence had fallen.  In the odd silence, he heard the footsteps.  Footsteps that walked when he walked and stopped when he stopped.  Pulse pounding madly, the butcher turned.

Behind him stood a black dog with blazing blue eyes and sharp teeth. The butcher had seen those blue eyes once before, gazing at him from the face of a young boy trying to save his burning brother.  The black dog growled softly and took a step forward. 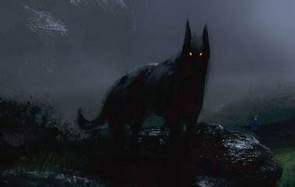 The butcher whirled around to flee and found himself face to face with tall figure covered from head to toe in flames.  The burning boy reached out toward the butcher with hands withered and blackened by fire.  The butcher gave a terrified scream and fell, blood gushing from eyes and nose.  He was dead before he hit the ground.

They say, to this day, the black dog and the flaming figure still appeared in that vicinity to harass travelers and speed them on their way.  Take care traveling down long dark roads.