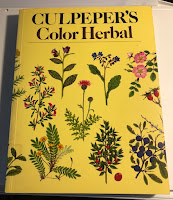 I got a new book.  Actually, I’ve had it a little while, I just forgot I had it – it arrived and I put it on the shelf with my other herb books.  It’s called Culpeper’s Color Herbal, edited by David Potterton and is based on the book “The Complete Herbal” written and published by Nicholas Culpeper in 1649.  Nicholas Culpeper, 1616-1654, was an English botanist, herbalist, physician, and astrologer.  His book was one of the most detailed works on medical and astrological treatments in Early Modern Europe.  He spent a great deal of time cataloguing hundreds of herbs.  Culpeper’s Color Herbal contains many of the notes, comments, and personal observations he made to contemporaries: "This not being pleasing, and less profitable to me, I consulted with my two brothers, Dr. Reason and Dr. Experience, and took a voyage to visit my mother Nature, by whose advice, together with the help of Dr. Diligence, I at last obtained my desire; and, being warned by Mr. Honesty, a stranger in our days, to publish it to the world, I have done it."

It's a very cool book with information on the medical use of herbs I’m familiar with (basil, hops, wheat, henbane, tarragon and such) to ones I’ve not heard of 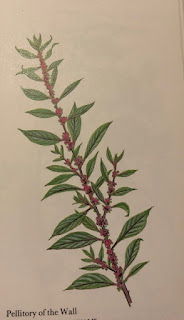 Pellitory of the Wall – The juice clarified and boiled in a syrup with honey and a spoonful drank every morning is good for the dropsy; by taking the dose once a week, that disease will be cured. It is found under Mercury. 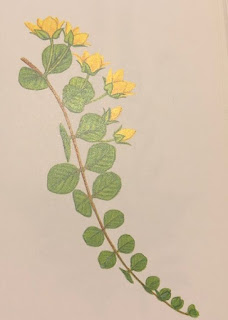 Moneywort – It is good to stay all fluxes in man or woman. It stays laxes, bloody fluxes, the flowing of women’s courses, bleeding inwardly and outwardly and quells stomachs that are given to casting.  Venus owns it. 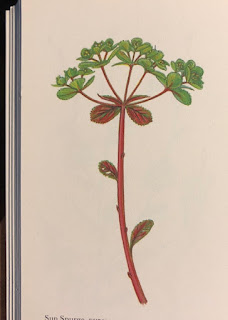 Sun Spurge – It provokes lust and heals numbness and stiffness of the privities proceeding from cold, by anointing.  Taken inwardly, it frets the entrails and scorches the whole body.  Pills of Sun Spurge helps the dropsy, pains in the loins and guts, but should only be given in desperate cases.  It belongs to Mars. 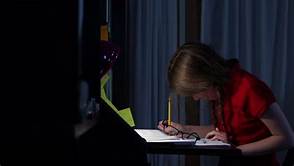 The young woman, of our story, realized she would have to pull an all-nighter in order to prepare for the next day’s final exam. The old dormitory had a large basement arranged for quiet with desks and comfortable chairs.  Since her roommate, shall we call her Jenna (?), liked to get to bed early, our girl packed up everything she thought she would need and went downstairs to study . . . and study . . . and study some more.

It was two o’clock, when she realized that she’d left one of the textbooks upstairs on her bed. Argh! She rose, and climbed the stairs slowly to her third-floor dorm room. The lights were dim in the long hallway, and the old boards creaked under her tired feet. She reached her room and turned the handle as softly as she could, pushing the door open just enough to slip inside, so that the hall lights wouldn’t wake her roommate.

The room was filled with an odd smell. She frowned a bit, her arms breaking out into chills. There was a strange feeling of malice (hatred, cruelty, evil) in the room, as if a malevolent gaze were fixed upon her.  A tired mind playing tricks, she thought, the all-nighter catching up with her.

She could hear Jenna breathing on the far side of the room—a heavy sound as though Jenna was sleeping restlessly.

And so, our girl crept along the wall until she reached her bed, groping among the covers for the stray textbook. In the silence, she could hear a steady drip-drip-drip sound. Damn. Facilities would have to come to fix the sink in the bathroom…again.

Relieved to be out of the room without awakening Jenna, she hurried back downstairs, collapsed into an overstuffed chair and studied until six o’clock.  She finally decided that enough was enough. If she slipped upstairs now, she could get at a few hours’ sleep before her morning exam.

The first of the sun’s rays were beaming through the window as she slowly slid the door open, hoping not to awaken Jenna. Her nose was met by an unpleasant smell a second before her eyes registered the scene in her dorm room. Jenna was spread-eagled on top of her bed against the far wall, her throat cut from ear to ear and her nightdress stained with blood.

Scream after scream poured from her mouth. All along the hallway, doors slammed and footsteps came running down the passage. Within moments other students had gathered in her doorway, and one of her friends gripped her arm with a shaking hand and pointed a trembling finger toward the wall.

On the wall above her bed, written in her roommate’s blood, were the words:

“Aren’t you glad you didn’t turn on the light?”