Seasons, Books, Nuts, and Other Stuff


We have reached the season of “My Closet Thinks I Have A Lot of Clothes”.  That’s because it currently is housing light-weight summer things AND heavier, long-sleeved things.  It goes like this. 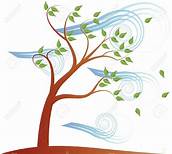 Last Friday we had a little cool front come through.  (Listening to the weather forecaster you’d had thought it was going to drop from 90° to freezing in a matter of seconds.)  A big wind came up and the temperature did drop to the 50-somethings.  The pecans rained down like hail.  All afternoon and evening there was “plink, plink, plinkplinkplink plinkadee do dah on the roof, the sidewalk, the yard.  It got chilly (wahooooooo) though not so much that I even thought about turning on the heat.  Saturday morning was, again, pretty chilly though not so much that I needed anything other than long-sleeves and jeans.  And, by Sunday, it started warming up.  Yesterday was hot and today we’re back in the 90’s.  Ugh. 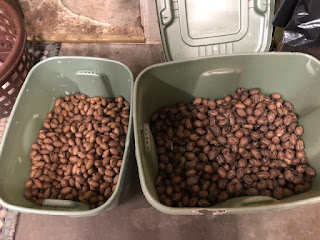 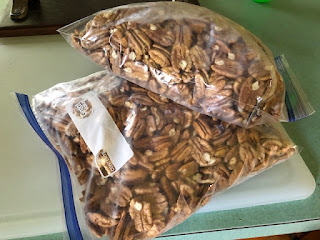 I recently read a really good book series – The Sharing Knife by Lois McMaster Bujold.  It consists of four books – Beguilement, Legacy, Passage, and Horizon.  Very good!  It is a story of love, hate, fear, happiness, prejudice, acceptance.  It examines the tension between the two cultures: the magical/traditionalist "Lakewalkers", who are fighting a Forever War against “malices”, and the techno-agricultural "Farmers", who tend to think “blight bogs (malices)” are less dangerous and abundant than they are.   The Lakewalkers think the Farmers are useless and the Farmers think the Lakewalkers are evil magicians.

My Confederate Rose bloomed this year.  My sister gave me a rooted cutting a couple years ago and this year --- TA DA ---- flowers. 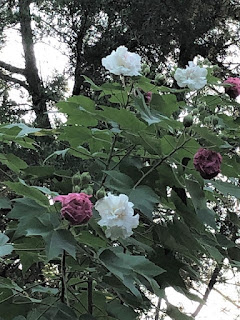 Originally from China, the Confederate Rose, a member of the hibiscus family, made its way to the US with English colonists in the 1600s.  The plant is known for its large blooms that change from white to pink to red before dropping off. It can be a large shrub or a medium sized tree reaching heights of up to 15 feet with spreads of about 10 feet.  Here you mostly find them as trees.  It likes full sun and consistent watering during the hot summer months though as it grows larger and older it becomes more drought tolerant.  If you’re in the frozen northlands (that’s north of Dallas) it is likely freeze to the ground and depending on how close to the north pole you are, it may not come back.  They can be grown in a container and protected during the winter.  It roots easily from a cutting and here it blooms in the fall.

Legend of the Confederate Rose.

Once the Confederate Rose was pure white. During the Civil War, a Confederate soldier was fatally wounded in battle. He fell upon the rose as he lay dying. During the course of the two days he took to die, he bled more and more on the flower, till at last bloom was covered with his blood. When he died, the flower died with him. Thereafter, the Confederate Rose opens white, and over the course of the two days the bloom lasts, they turn gradually from white to pink to almost red, when the flower finally falls from the bush.

While outside earlier I saw this little guy.  He seems to have taken up residence in one of my birdhouses.  That's ok. 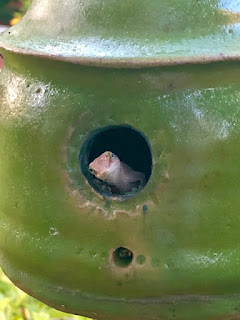