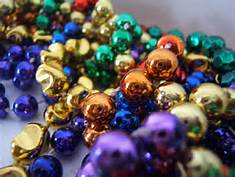 Ok, that said, IT IS COLD HERE!  VERY COLD, AS IN NOT YET ABOVE FREEZING COLD!  This is south central Texas.  South.  Like close to the Gulf of Mexico south.  And, this is March.  The meteorological beginning of spring occurs on the first day of March and today is the 5th.  Wrong, wrong, wrong.

I blame it on the fact that it’s Mardi Gras Day.  All the times I’ve been to Mardi Gras, it has been cold.

And, although it’s supposed to warm up to almost 50°, it’s going to be below freezing again tonight.  However, there is a good thing in the midst of all this cold - it has cleared up a bit and, omigod, there is a burning ball of light in the sky!  Tomorrow, we should see the sun between the clouds – two days in a row - wow.  Annnnnnd, Wednesday it’s supposed to rain – again.  Looking at the long-range weather we’re supposed to have rain, clouds, rain, thunderstorms, clouds, rain, thunderstorms.  Sigh 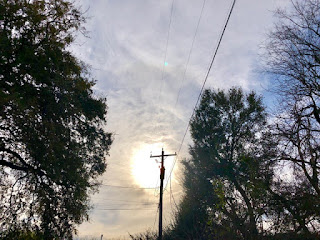 We had such a warm February, toward the end of the month, I moved several plants outside.  I did it KNOWING in my heart of hearts, in all likelihood, we’d have another bout of chilly (chilly, not north pole cold) weather.  So, when the powers-that-be said 30-ish weather was coming, I moved a bunch of the plants back into cover.  I left some out thinking – “on the south side, close to the house, on the porch, all will be okey dokey.  Then, the 30-ish changed to 20-ish.  Everything got moved back in.

I’ve been quiet the past several days.  Stuff going on.  My two San Antonio grandchildren were here for a day.  Yea!  We got to watch a couple more episodes of The Haunting of Hill House.  I don’t watch it unless my grandson is here.  And, while it is nothing like the book (by Shirley Jackson) it is “based” on, it is alarming, scary, creepy, blood curdling, chilling, and so forth.

How about something not related to 1 cold, 2 rain, 3 scary.

OK, tomorrow is the birthday of Aspirin (acetylsalicylic acid).  It was first synthesized and manufactured in 1899 by Felix Hoffman who worked for the German company, Bayer (you’re not surprised, are you?).  And, Did You Know? prior to that people used the herb Willow (its bark in a tea) for fever, pain and inflammation.  Willows all have abundant watery bark sap, which is heavily charged with salicylic acid, slender branches, and large roots.  The leaves are typically elongated.  And they bloom. 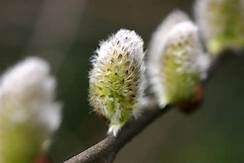 Catkins!  Cute or what!

Want to make your own Willow bark tea?  Bring 8 oz. water to a boil.  Add 1 to 2 tsp. dried willow bark and continue to simmer for 10 to 15 minutes.  Remove the water and bark from heat and continue to steep for an additional 30 minutes.  Strain the bark from the water. Drink three to four cups of this tea per day for pain relief.

Today is, yes, Mardi Gras, International Pancake Day (oh goodie – I like pancakes), Poutine Day (a dish consisting of French fries and cheese curds topped with a brown gravy tho there seems to be some difference in opinion as to when Poutine day really is – maybe not until April), Saint Piran Day (born in 4th century Ireland, worked/died in Cornwall, patron saint of Tin-miners, Cornwall, Tin-smiths, and Miners – in general, I guess).

And, it’s Unique Name Day (This is the day to salute friends, acquaintances and loved ones who have a unique name. If you or anyone you know has a unique name, discuss it today! Celebrate it!)  My 2nd great grandfather’s name was Frances Marion (try googling that and you come up with a zillion women).  I expect his name wasn’t unusual in 1825 but it’s certainly less popular now.  I always liked the names of those that live upon Pern (the third planet in orbit around the star Rukbat).  Lessa, F’lar, Piemur, Menolly, Mnementh, Ramoth (well, those last two are dragons but I like the dragon names too).  (The Pern Series of books by Anne McCaffrey)

Well, it’s finally gotten above freezing – a toasty 36°.  I’m going to have a cup of hot tea and not go outside.