Today is Ostara (the Vernal Equinox).  Yea!  Spring is now officially here.  Quick while it’s sunny, go outside and enjoy all the beautiful flowers, the new “spring green” the trees are producing, mild temperatures, and blue skies.  Walk your neighborhood, work in the garden, visit a state park.  We’ve all been trapped inside with dreary, rainy, cloudy, chilly weather so go outside NOW! 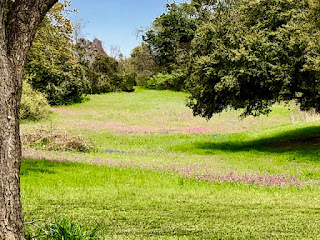 Yesterday a friend and I had a day long of adventuring.  We left here early and drove to Brenham.

Brenham is the county seat of Washington County in south central Texas and is known as the “heart of Bluebonnet country”.  It has one other major attribute.  It is the home of the Blue Bell Creamery (the-best- ice-cream-in-the-world).

The highway between here and there tends to be bright with wild flower color from March to April.  There weren’t as many blooming as we’d hoped – probably due the late cold snap – but the ones we did see were beautiful. 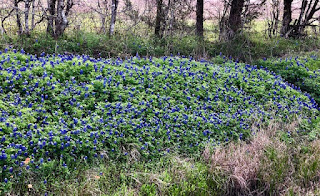 We did see several large groves of Acacia trees in bloom.  I think I need one of these.  The flowers are cute little round yellow fuzzy balls. 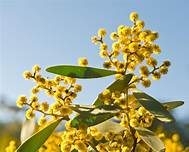 First stop in Brenham, was, of course, the creamery. 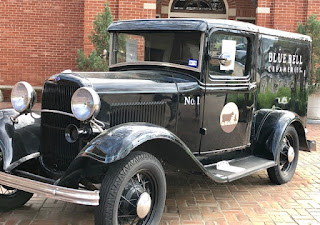 You can tour (sort of) the creamery and watch as containers are filled and sent along to the cold room (-40° cold).  It was interesting to watch and honest-to-god, if I worked there, I’d weigh 500 pounds.  I can remember when you could only get Blue Bell in Brenham and Houston (1960’s).  They expanded to the rest of Texas and then, by 1990 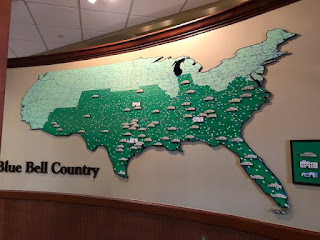 And, yes, while we were there, at 11AM, before lunch, we had ice cream.  One scoop = $1.  One scoop was huge!  My favorite – Moo-llennium Crunch.  Full of all kinds of really good stuff.

Our next stop was to be The Antique Rose Emporium in Independence, TX.

Independence is an unincorporated community northeast of Brenham.  It was founded in 1835 and was the center of the Republic of Texas.  In 1845 it became the first site of Baylor University and the University of Mary Hardin-Baylor.  Unfortunately, Independence declined giving a right-of-way to the railroad, saying the Brazos River would always be transportation king and faded into obscurity.

To get there, Siri took us via all the small back roads, which was nice.  While traveling down one stretch, we came across a number of large properties with gates guarded by 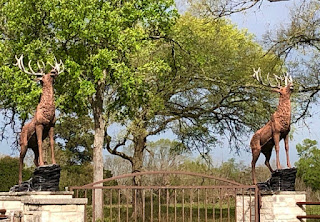 Honest-to-god, these guys were the size of
real live deer! 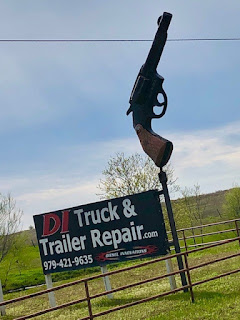 Ooookay.  Pass on driving
in there. 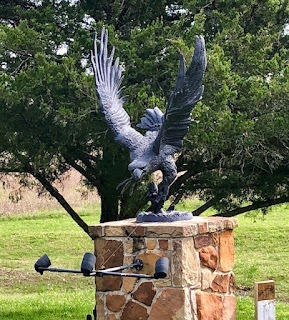 Maybe they're a rock band
Guns, Bucks, and Eagles


There was one more, which I didn’t get a picture of unfortunately ---- carousel horses.  Sort of didn’t fit with the others.  Still I like merry-go-rounds so those worked ok for me. 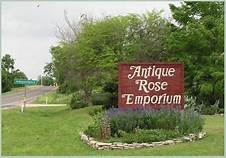 The Antique Rose Emporium is a wonderful place to visit.  Not only do they have an amazing selection of antique roses, they also have a huge assortment of anything else you might want.  And, if you don’t want to buy anything – go for the gardens.  The grounds are massive and include several buildings – like a small church, a farm house, two or three out building all nestled among well-tended flower beds.

Just a few of the things that caught my attention 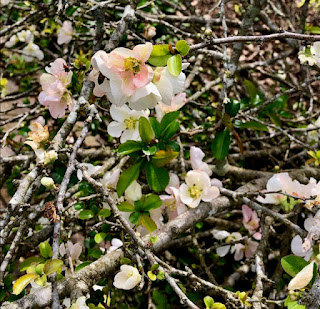 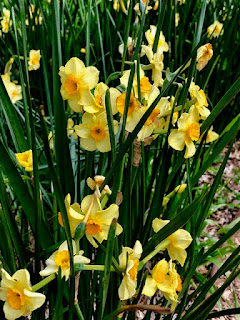 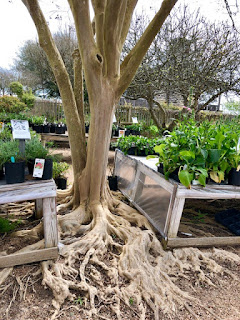 Oh, and this.  I neeeeeeeeed one of these! 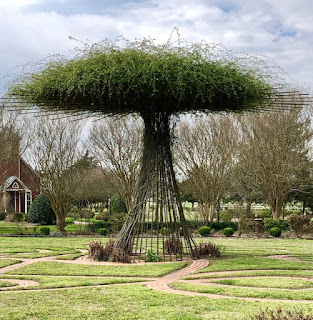 It’s like a million feet tall and made from rebar.  This one is planted with roses!  How cool is this!

Ok, now I have to stop and continue with the adventure tomorrow or, I’ll miss today.