Birdies and Ents and Daffs


A few years ago, my sister, saw a teacup bird feeder and her “I can make that” kicked in.  She made one for herself, hung outside her studio window and proceeded to comment on all the birds that visited it.  And, so, I hinted (makemeone, makemeone) and she gave me one for my birthday. 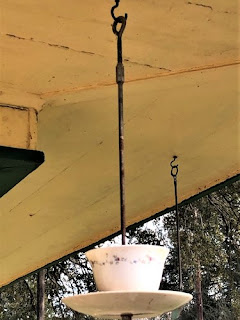 I hung it under the eaves, just outside my kitchen window, filled it with birdseed and awaited the birds.  Then, several days later, as I walked through the kitchen, I registered movement through the window.  Looked and much to my surprise, I saw . . . . . . .

A BIG FAT SQUIRREL SITTING IN THE TEACUP EATING THE BIRD SEED!
Arrrgghhh!

To be honest, I made several very unkind remarks about the squirrel and just what it could do with itself.  I’m thinking the damn thing heard me through the window because it went flying off, knocking the teacup feeder off its hook.

And, it broke.  Boohoo!  It was the saucer that broke so I took the feeder along with a new saucer to my sister – “Fix this please”.  That done, I returned home and roamed my yard, front and back, to try to find a place for it.  Where-o-where is there a safe, moderately squirrel proof place.  And, I settled on one of the supports for my gazebo.  No trees nearby.  Squirrel will have to balance beam walk across to it.  Ha! Safe place.  Until I looked out and saw this . . . . . . 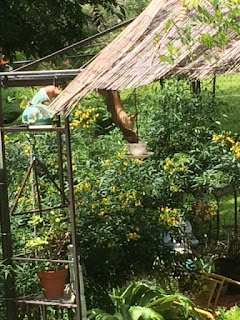 Really?
Hanging by its toes, head in the cup.

And, so again I roamed the yards looking for a safe place.  So, finally, I just hung it, empty, on one of the branches of the Ent that lives on my front porch. 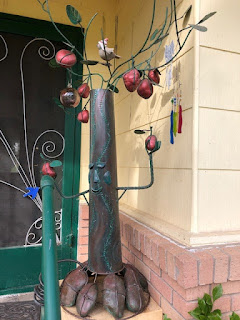 Ent – you know - a race of beings in Middle-earth who closely resemble trees (Did You Know? their name is derived from the Anglo-Saxon word for giant) and are ancient shepherds of the forest.

And, it hung there for some time until, I happened to notice a small bird land on the rim of the cup and look in.  So, I decided to try to find a safe place again.  Now, it hangs under the eaves in the front yard, close to the porch and surrounded by windchimes (which bother the birds not one bit).  (So far, so good – no squirrels)

And, I have birds!  I’d try for a picture of the birds feeding but with my solar screens, all the pictures look like this . . . 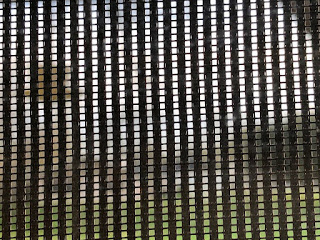 But, I have a pair of cardinals that visit regularly, a red-headed woodpecker, and several Carolina chickadees.  How cool is this!

Ok, here’s another – Did You Know?.  The flower of the month for March is Daffodil. 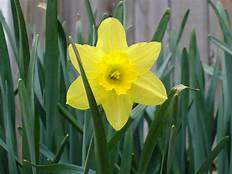 o   The Daffodil's ancestors come from places like Spain and Portugal and the Middle East. The earliest record mentioned about Daffodils was around two or three hundred years B.C.
o   Grown extensively by the ancient Greeks and the Romans, Daffodils became a forgotten flower until about 1600 when a group of Englishmen took the Daffodil out of the weeds and put it into the garden.
o   Daffodils were brought to Britain by the Romans who thought that the sap from Daffodils had healing powers. Actually the sap contains crystals that can irritate the skin.
o   During the days of the American expansion west, Daffodils were well established as a "must have" in the garden.

They are a member of the Narcissus family.  They like lots of water.  They bloom in the spring.  They will multiply.  And, they should be planted in the fall.

Pretty – yes.  Personally though, I’m not a big fan of bulbs.  They’re a lot of work and don’t always produce consistently here in our Texas climate.  Many require more cold hours than we generally have.  Plus, I still remember, Once Upon a Time . . .

My aunt had given me a big box of various bulbs with instructions to do a “woodland” planting.  That is, put them all in a bag, shake them up, and roll them out into the flower bed, planting them where they land.  OK.  This I did.  At the time, my oldest daughter was about 2; her sister a year younger.  The youngest one slept peacefully on a blanket.  The oldest on the blanket with a variety of toys.  So, bulbs all in the bag, shaken, spilled out into a 10-foot bed and I started to plant.  Dig a hole, pop in the bulb, cover with dirt and repeat many, many times.  And, some time later - finished.  Yea!  Now, at some point in this process, I knew the oldest had walked over where I was working.  I know because she was chatting with me and her sister.  Looked back to see a planted flowerbed and saw that my daughter had come along behind me and pulled each bulb out of its hole and tossed it into the grass.  On the good side, she helped me gather them all up and back into the bag.  I think I gave all the bulbs away.

That was my last mass bulb planting!