. . . today, is the shortest day of 2018, The Winter Solstice and Yule.  The solstice this year will be extra special because the next day the Cold Moon is full and there is a meteor shower to boot.  Known as Solstice Night, or the celebration of Yule, the sun's "rebirth" was celebrated with much joy.  On this night, our ancestors celebrated the rebirth of the Oak King, the Sun King, the Giver of Life that warmed the frozen Earth.  Then, starting the next morning at sunrise, the sun climbs just a little higher and stays a little longer in the sky each day. From this day forward, the days would become longer. 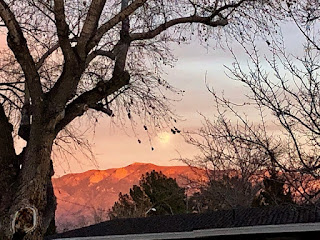 The Cold Moon rising over
the Sandia Mountains

It’s traditionally a time to think about what you want to do and accomplish in life; a time to take a beat and think about the coming year.  Sort of like an early New Year’s, without the party.

Once upon a time, long, long ago, a beautiful young woman lived on a blue and green island. She had many friends on the island, fairies, trees, flowers, rabbits, deer and birds... but she was the only person who lived there. She wanted to share her friends and her secrets with other people just like her, so she began to give birth. Every month when the moon was hiding, she gave birth. For the first six months, she gave birth to daughters with dark skin and eyes. For the last six moons of the year she gave birth to fair skinned daughters. On the seventh moon of every year the First Mother gave birth to a magical, sacred oak.

As the years turned, many, many daughters were born, and quite a few oak trees as well. The daughters played games with the animals and each other, they climbed in the branches of the oak trees and gathered flowers with the fairies. One day the first born daughter of the First Mother gave birth herself. The First Mother was very proud and happy, her favorite friend Oak Tree(who was very wise) gave her a silver crown to wear and told her that she was now a Grandmother. Soon many of the daughters gave birth, and the island became an even happier place, full of babies and big girls and mommies who all played together with the animals, the trees and the fairies. 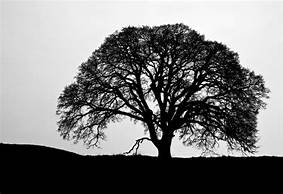 One winter night when the moon was hiding, one of the daughters gave birth to a baby that was different from anything they had ever known. It was not a daughter, it was not even an oak tree, it was a baby BOY! It was a very dark cold night, the longest winter's night of the year, so all the daughters and all the animals were snuggled up together to keep cozy and warm. After their excitement of seeing a brand new baby born passed, the daughters and the animals realized that the baby boy was not feeling well. He was not as strong or as warm as the babies and trees that were usually born on the island. They all began to worry about the new baby, and tried to help keep him warm. The animals with the furriest coats pushed up close to the mother and baby, the fairies sprinkled magic dust above him, and the little girls sang wonderful songs and danced around and around the room.

But the baby boy couldn't get warm enough and soon he was too cold and tired even to cry or to drink the healing milk from his mother. The First Grandmother was so afraid for the baby boy. She tried to hide her tears from her daughters and ran out into the forest. The snow was very deep and full of white glitter. She tried to walk but it was just too deep. So her friend the owl carried up above the snow filled clouds deep into the magic forest where her firstborn, most sacred wise friend Oak lived. The First Grandmother intended to ask Her friend for advice about the baby boy. When the owl reached the clearing where the sacred First Oak tree lived, the Grandmother gasped! There was no snow on the ground there, and in the middle of a perfect circle lay her friend the Oak. The tree had Fallen to the ground and broken into a pile of logs and branches. She rushed to kneel beside the broken tree, and her teardrops turned into sparkling icicles on her cheeks.

While she was trying to understand what had happened to her dear friend, a coyote entered the circle and brushed up beside her. First the coyote kissed her tears dry, and then whispered a secret in the First Grandmother's ear. The Grandmother nodded, and with the help of the coyote and the owl, she gathered some of the branches from her oldest friend Oak and they returned to her daughter and the baby boy.

The mother brought the baby boy close to the edge of the fire, closer than everyone else( they were still just a little bit scared of this new thing called fire). The baby boy opened his eyes just a little bit, and began to wiggle his fingers. Then he smiled and moved his toes too. When he was warm enough, he snuggled with his Mother and drank her milk, soon everyone was certain the baby boy would be okay. They were all so happy, they danced around the fire singing their favorite special songs and giving little gifts to the fire.

The baby boy grew up strong and happy because of the gift of the First Oak Tree. He had many sons of his own, and taught them all to plant acorns on the seventh dark moon of the year so that there would always be many, many oak trees on the island. Every winter, on the longest coldest darkest night of the year, all the people who lived on the blue and green island built a very special fire. They brought in a special tree and honored it with shiny ornaments and glittery fairy dust. They picked one very special branch or log and sang their favorite songs while they decorated it. Then they would give this beautiful log to the fore as a present... and all the children would hear the story of the gift of the First Oak tree.

On the longest night of the year, whenever you light a candle or build a fire, remember the story of the First Grandmother and the coyote who told her the secret. No matter how cold and dark it seems, The Sun will always be reborn and bring us warmth and light again. 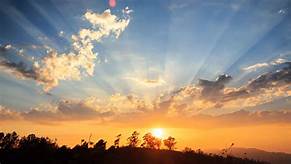