Oh, by gosh, by golly; It’s time for mistletoe and holly 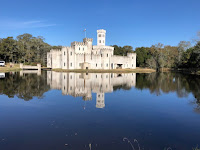 While we were walking around the castle grounds (that would be Castle Newman in Bellville), we chanced upon a shrub with the prettiest, almost translucent, red berries.  I thought “holly” but the leaves didn’t seem right; “pyracantha”??.  No, no thorns and the berries looked too red and fresh.  Hmmmmm.  Back to holly.
I’m pretty sure it was Yaupon Holly.  It’s an evergreen shrub or small tree native to the southeast US.  In the spring it produces small white flowers and then, red berries through the fall.  Yaupon Holly grows best in maritime forests, salt marshes, and the woods and swamps of the coastal plains (which includes Bellville).  The berries attract and provide food for birds and other wildlife, including white-tailed deer.  Each berry contains 4 hard, oblong seeds (well, shuckie darn! I should have picked a couple).  It grows in full sun to partial shade and once established, it’s a drought-tolerant plant.  For those interested in planting natives - this is a good one. 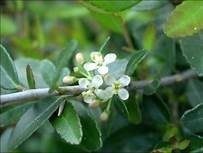 Now, if you are lost in the wilderness and come across the Yaupon Holly, you can make a tea with the leaves.  (After performing the Universal Edibility Test, of course – need to make sure you’ve got the right plant.)  The leaves contain more caffeine by weight than either coffee beans or green tea.  In fact, it has the highest caffeine content of any plant native to North America.  It’s also high in antioxidants and less bitter than green tea.  In the way-back-times, made as a very strong brew, it was used to induce vomiting and for purification.  And, during the Civil War, southerners substituted Yaupon Holly tea for coffee and black tea. 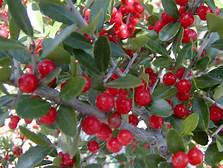 During the drive home, we passed a number of trees bereft of leaves but sporting clumps of dark green Mistletoe.  I always think I just might be able to reach a clump, forgetting of course, the ground is several feet lower than the highway.  Even standing on the roof of the car I couldn’t reach it.  Grrrrrrr. 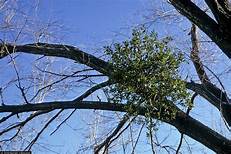 Mistletoe is a partial parasite (a "hemiparasite"). As a parasitic plant, it grows on the branches or trunk of a tree and actually sends out roots that penetrate into the tree and take up water and nutrients. But it can grow on its own producing, like other plants, food by photosynthesis.  Now, there are two types of mistletoe - Phoradendron flavescens (native to North America) and Viscum album, (of European origin). 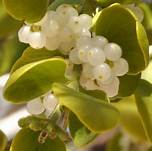 The North American Mistletoe produces small white flowers which mature into the traditional berries you think of when you think of mistletoe.  However berries of the North American mistletoe can be red, orange, yellow and white.  Birds love them.  And while they’re not considered highly poisonous, it’s best to not eat any.

Mistletoe was a plant held sacred by the Druids.  It was considered to bestow life and fertility; as protection against poison; and an aphrodisiac.  Branches of mistletoe were hung from ceilings to ward off evil spirits.  In Europe they were placed over house and stable doors to prevent the entrance of witches.  In Scandinavia, mistletoe was considered a plant of peace, under which enemies could declare a truce or warring spouses kiss and make-up.

Frigga and the Mistletoe
A Norse Myth

Frigga (also known as Freya) was the goddess of beauty, love, and marriage. Wife of the powerful Norse god Odin, Frigga was a sky goddess, responsible for weaving the clouds, and therefore responsible for rain and for thunderstorms. 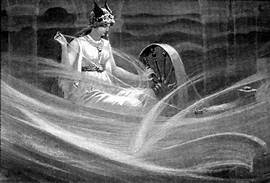 Sitting at her spinning wheel weaving the fates, she was also a goddess of divination and credited with the creation of runes...more precisely she was a 'seer', one who knew the future but could never change it or reveal it to others.

Frigga was the mother of Baldur, the best loved of all the Norse gods. And she foresaw his death. Knowing that there was nothing she could do to avert his fate; the hapless goddess extracted a promise from all things that they would play no part in his death. Unfortunately, thinking the poisonous plant was too insignificant to bother with, she neglected to secure its pledge.

And when the malevolent prankster Loki discovered her oversight, he crafted a dart made from the mistletoe. Devious and evil, he brought it to Baldur's brother who was blind, suggesting a game of darts and agreeing to guide his hand. And this he did, directing the dart directly at Baldur's heart, killing him.

The mistletoe's white berries were formed from Frigga's tears of mourning.  As the berries fell upon his chest, Baldur was restored to life, and the goddess Frigga was so grateful that she reversed the reputation of the baleful plant, making it a symbol of peace and love and promising a kiss to all who passed under it. 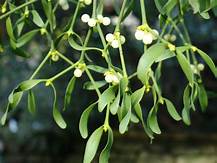