I had every intention of publishing a piece on the 2017 Herb of the Year – Cilantro/Coriander.  Which didn’t happen.  So, I’m going to take a quick step back to 2017.  And, did you know … 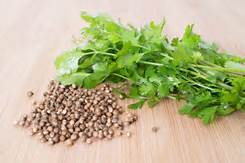 An annual, Cilantro/Coriander is a favorite in many gardens.  It grows best in partial sun or as a late fall/early spring plant (at least here – it doesn’t care too much for our summer heat and humidity) in a well-drained soil.  The cilantro leaves can be harvested when the plant has reached its mid-growth.  It  will flower with tiny fragrant pinkish white blooms and then go to seed (Coriander). This a is two-for-one plant.  If not picked for the seed, this plant is a reseeder and will pop back up next spring.

This is one of the world’s oldest known herbs and has been cultivated for over 3,000 years.  The ancient Egyptians believed coriander could be used in the afterlife as a food and the seeds have been found in Egyptian tombs.

It is most often used in Mexican, Asian and East Indian dishes. All parts of the plant are edible, but the fresh leaves and dried seeds are most commonly used. The roots of the plant are an important ingredient in Thai cooking where it is minced and used in salads, curries and relishes.  The leaves are best used fresh as drying will cause a loss of flavor.  Add at the end of the cooking time to maintain flavor.  Leaves are great to use with tomatoes and peppers for salsa, added to salads, scrambled into eggs, included in guacamole, hummus, pesto sauce, fish, and poultry dishes. The tender stems can be added to the water for flavoring couscous.  The seeds can be ground or used whole in curry, chutney, marmalades, pies, cakes, breads, cookies, soups, sauces and vegetable dishes. 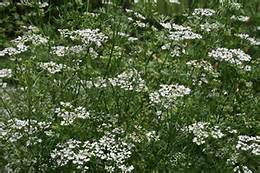 Medicinally the essential oil can be added to ointment for pain relief of joints and muscles. The leaves and seeds, used in a tea, have digestive properties and stimulate appetite.

Carry a fresh spring of Cilantro in your pocket during a job interview; it can help the interview be successful in obtaining a job.  Bonus! 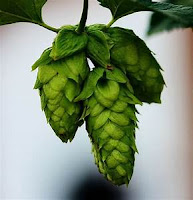 Everybody recognizes Hops – a flavoring and stability herb used in beer making which gives it a bitter, zesty, and/or citric flavor.  But, did you know, that hops have been used in beer making since the 9th century.  Prior to that, beer was made with bitter herbs like dandelion, burdock, marigold, horehound, and ivy.

Hops are the flowers (also called seed cones) of the plant Humulus lupulus.  This plant is a vigorous climbing perennial, usually trained to grow up strings in a hopfield, hop garden or hop yard.  Pretty cool that they have their very own name rather than just “the herb garden”.

But, hops can also be used in herbal medicine also.  Similar to valerian, as a treatment for anxiety, restlessness, and insomnia, a tea made with hops can bring relaxation and calm.  Though, you should remember that hops is a bitter herb so you will need to add a sweetener like honey or agave nectar.  Fill a dream pillow with hops to encourage pleasant dreams.  Or, boil hops flowers in water and use it as a cleaning agent to promote peace and relaxation in a room.

Hops is a very attractive plant - it needs to grow on something (rather than crawl all over the ground), is very aromatic, and has many uses.  What more could you want! 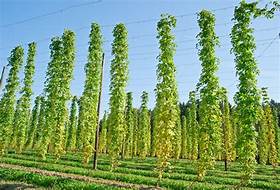 because “bines have significant stems with stiff hairs that aid in their ability to climb while vines use suckers or tendrils to attach themselves to surfaces” – ha! another bit of interesting moderately useless information).  They can grow up to a food a day topping out at 25+feet.  They are grown from rootstock or rhizomes.  Hops should be planted with a southern exposure in a light, well-draining soil.  Plant the rhizomes as close together as 3 feet.  Water consistently during the first year.  Harvest the flowers in early fall when the seed cones (flowers) feel dry-ish. 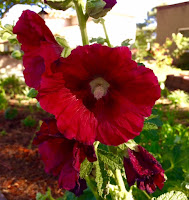