The first week I was in Washington it was cold and it rained (or snowed).  Not the pouring down rain I’m used to but more a heavy drizzle.  This is normal weather, I am told.  Fine, I’m from Texas – rain pouring or dripping is not a problem.  Snow - well I don't see it as often but I did live in Colorado for a time, so, not a problem.  However, I will say that it made me v-e-r-y aware of the roads which all go zig-zagging down and on which everyone drives really fast.  When the three of us went anywhere, I was perfectly happy to sit in the back where I could not easily see the road ahead because my brother drives like a bat-out-of-hell! 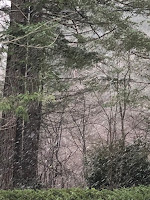 And, there are waterways everywhere.  Creeks, sloughs, bays, rivers, channels, harbors, lakes, ponds, and sounds.  Everywhere.  And, although I didn’t get into any of those waters, I suspect they are all cold – all the time.  Give me the warm bath tub water south of here call the Gulf of Mexico any day!

I was also surprised by the amount of still green plant life (it was in the 30s and 40s, plus it snowed, for heavens sake).  Ferns, rhododendrons (a bigger relative to azaleas), fir trees (not a pine, as I have been told MANY times –which, by the way, is an evergreen coniferous tree in the family Pinaceae – like the pine tree), holly, ivy, blackberry canes, and the ever present orthotrichum (a moss that grows on everything).
I have to say that, although I’ve seen all sorts of dog houses, I’d never seen calf houses. 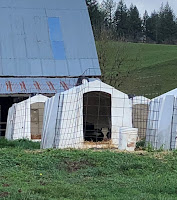 The second week, it was still chilly but the sky cleared up and was beautiful blue.  We went out for some sight-seeing.  Beacon Rock is a huge chunk of rock along the Columbia river.  There is a hiking trail to the top which is open year round.  We didn’t try hiking up though as the wind was blowing so hard, it literally knocked me over while trying to take this picture. 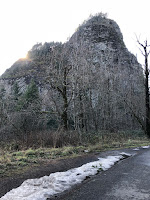 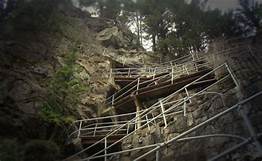 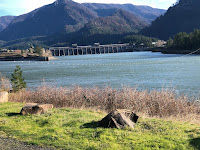