Dreams affect us all – some we remember with total clarity and some that leave an uncomfortable, itchy feeling; some that are wonderful and some jerk you awake in a cold sweat.

I was dog sitting last summer while my sister, et al, were vacationing.  At bedtime, Minnie will usually stay in the living room for a time and then get in bed with me.  This night she came to bed early but she settled down and, other than being a little furnace nestled up close, was not much noticed.

I dreamed a much younger version of myself was vacuuming the carpet in my mother’s formal living room in the house of my youth.  It was an old-fashioned tank vacuum – rather like a short fat cigar with a long hose off one end – we actually had one like that back in the day.  (and, weird right off because vacuuming is low on my list of fun things to do.)  There was a man in the room with me.  At this point, I was watching the dream as though on a TV, so I could see myself vacuuming but all I could see of the man was his back.  I could see that he was dressed in a manner that made me think of one of the earlier Dr. Who characters.  And, that’s how I thought of him – Dr. Who.

He told me if I ever needed help, all I had to do was ask for it.

As I continued to vacuum the carpet, an odd dog-like animal came in the room to watch.  And, although I couldn’t see it, another creature came in and crawled along the walls and ceiling.

Then, as dreams happen, things changed in an instant.  Now, I was back to my current self and in bed in a dark room.  I sat up in the dark bedroom and knew something was just outside the room – something bad, something dangerous.  I started shouting “Help me” over and over.  There were two or three doors into the bedroom and all opened and someone walked in one door, the odd animals in the others.  He wore something rather like a zoot suit.  His one eye I could see was just a black hole.  He had a sharply pointed nose.  And, very white skin.  He walked over to the bed to touch me and …..

Something did touch me.  I screamed so loudly my throat hurt.

It was Minnie.  She was licking my face, trying as hard as she could to help me wake up.  Morgan, who had been asleep in her bed on the floor, was whining and whimpering right next to my bed.  I turned on the light.  Of course, no one was there but Morgan and Minnie.  Still, they had both offered help when it was needed. 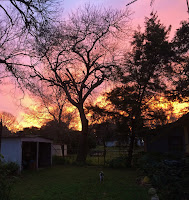