The bride was beau ….. hold on, I’m getting ahead of myself.

Granddaughter #1 got married this past Friday!!!!

My older daughter, Denise, came in (from NM) for the wedding and then last Thursday late afternoon, she, my sister, and I drove to New Braunfels. 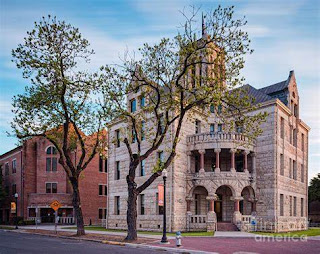 New Braunfels is just north of San Antonio and is considered one of the fastest growing cities in the state.  It was established in 1845 by Prince Carl of Solms-Braunfels, Commissioner General of the Mainzer Adelsverein or the Noblemen's Society.  Prince Carl named the settlement in honor of his home of Solms-Braunfels, Germany.  Located in the Texas Hill Country, it is still known for its German Texan heritage.  There are two rivers that run through New Braunfels – the Comal and the Guadalupe.  The combination of rivers, German architecture and food, and beautiful scenery make tourism a big business there. 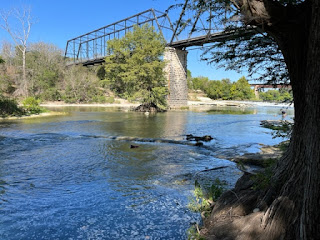 We arrived early evening to the AirB&B. 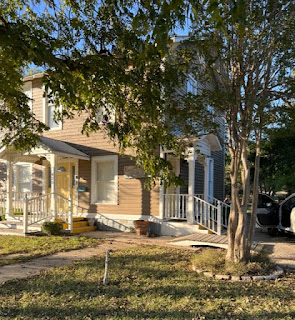 It’s very nice.  And, we had some surprise visitors in the early morning hours – pretty cool considering we were right downtown! 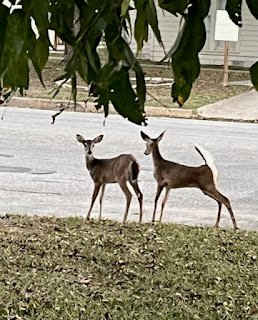 We stayed on the second floor which consisted of two good size bedrooms, one bathroom and a small living room, dining room and kitchen.  We got the car unpacked and everything up the stairs.  Now, Vicky had some specific thoughts on what she wanted in regard to her wedding cake.  Not the traditional multitiered cake but instead she wanted a small cake (for the obligatory cake cutting photos) and cupcakes.  Lemon and Strawberry cupcakes.  Her mother (my youngest daughter) made the lemon and I made the strawberry.  So, in addition to suitcases we also hauled up the stairs a large cooler holding 40+ cupcakes, strawberry icing, and extra strawberries.  My goal for Thursday night – get those cupcakes frosted and into the travel boxes.

Okay, I had brought cake decorating tips/bags and thought we’d use those to end up with fancy frosted cupcakes. 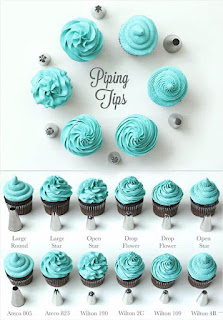 Uhmmmmm – no.  That didn’t happen.  First of all, the B&B was very warm when we arrived and then the icing got soft very quickly and none of us had any experience with using the decorator tips and we finally just iced them and put a strawberry on top. 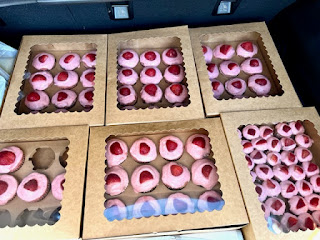 Here they are – all ready to go to the reception venue.  Friday morning Ellen and I took the cupcakes and dropped them off.  And, since there was a little time, we did a bit of shop looking.  We had both seen a shop we wanted to visit. 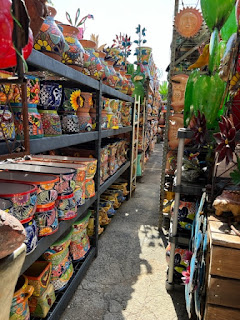 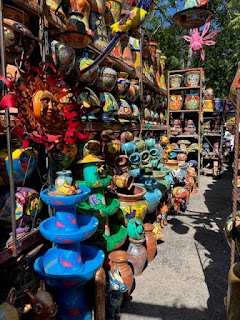 It was filled with Talavera pottery so we stopped for a look-see.  And, the place was huge with shelves stacked high with pottery.  It was like walking around in a maze.  I’m pretty sure I didn’t see everything.  No purchases but a lot of hard thinking.

The wedding was to start at 3:00 Friday afternoon and we were supposed to be there around 2pm for photos.  As it happened, people were running late so the big family photos never happened but that gave me a few minutes to take a quick couple of pics. 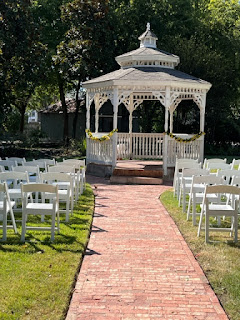 The gazebo for the actual ceremony. 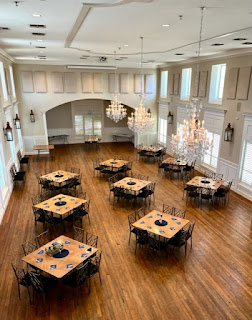 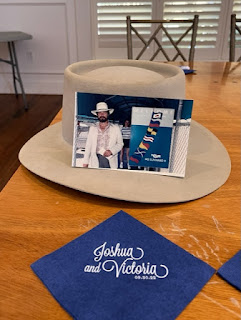 Her way to remember her grandfather and make sure he was there too.
One of his hats and a photo on the bride/groom table. 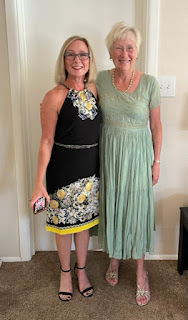 Daughter Denise and I.

At 3pm, the music started, everyone stood up, and Vicky walked down the isle on her father’s arm.  Then the officiant stepped forward and said ….. 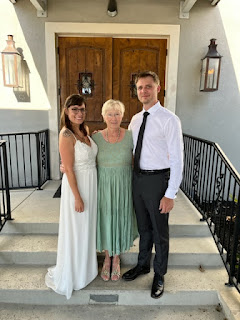 Vicky and Josh and Me 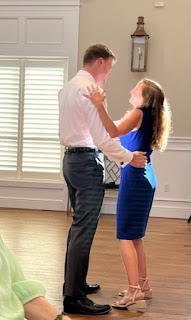 Youngest daughter and Mother of the Bride dancing with the new son-in-law.

There’s more to the trip but this is long enough already so I’ll save the rest for tomorrow.