a couple days ago (that’s Tuesday), the high temperature was 38°.  Thirty-eight.  Now, today (that’s Friday), the high is going to be 76°.  A forty-degree difference in just three days.   I swear, there must be a three-year-old controlling the thermostat.

I went out this morning and pulled plants out of the greenshed.  Again.  Though, this time I feel pretty safe with the plant moving (please excuse the whispers – I do not want the three-year-old to hear me).  The plants all seemed to take a deep breath.  That done, I came in – it’s really wet out there; wet, damp, drippy, misty, dewy, moist, soggy – you understand.  It’s a good day to read …..

The Devil and the Three Sons
(An Irish Tale) 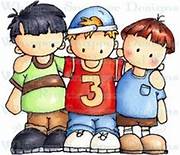 Once upon a time there lived a poor widower who had three sons, and he loved those sons, he did. He loved his sons so mightily that he wished to give them all he could. He wanted to spoil those lads, he did. Sad to say, because he was poor and could not buy  them gifts, he worried about his sons' education and their future. One day he decided to sell his soul to the devil. That way he could provide everything his sons needed.

And so that's what he did.

He called the devil to him and he said, "The only thing I care about in all the world is my three sons' well-being, so I'm ready to sell you my soul, so long as you pay me well enough to educate my lads."

"Happy to do that for ye," said the devil, for he was always seeking souls to buy. He gave the man a pot of gold. "I'll return for your soul when I'm ready," said the devil, and he tipped his hat and was gone.

Many years passed. The boys grew tall and strong and handsome, and they were good lads, too. Their father cared for their every need, and this was easy to do, for he had plenty of money. The lads loved their father, though they never knew that he had sold his soul for them. They had no idea how he had come upon the money he used to send them to school, but they agreed to do their best to make him proud.

And so, the eldest son became a priest. The second son became a doctor. When it came time for the third son to decide what he would do, all four men gathered. "I'd say you would make a fine lawyer," the father said, and his other sons agreed.

Time passed, and all three young men did well in their professions. The father was growing older, of course, and so were his sons, and one day, the devil came to pay him a visit. As it happened, his eldest son was visiting that day, too.

"What on earth is he talking about?" the eldest son asked.

"Ah, I've a sad story to tell, son," said the father. He confessed to his eldest child what he had done so many years ago. "I regret it now. I'd like to be here longer, don't you know."

The eldest son was distraught to hear this news, and he had no desire to lose his father. He said to the devil, "We love our father a great deal. I'm a priest, you know, and I'll be praying now. Give him a wee bit more time. That's all we'll ever ask."

"Just a little bit, then," said the devil, for he was not in the mood for arguing, but as he was leaving the house, he turned to the old man and said, "I'll be returning in a while, and you won't be feeling well while I'm gone."

Sure enough, the old man became very sick, and the eldest lad called his brothers to their father's bedside and told them the tale of their father's bargain with the devil.

"Surely there is something we can do to change the devil's mind," said the second son. "After all, I am a doctor. I am certain I can cure our father of whatever ails him." He set to work and tried every kind of remedy he knew, but the father grew still weaker and more pale.

And then one day the devil came again.

"Now, devil," pleaded the son who was a doctor, "give me one more day to prove my skills are stronger than yours."

The devil smiled a devilish smile. "One more day," he said, for he knew the doctor's power could not match his own.

The doctor worked through the night to try to restore his father's health, but at dawn, when the devil came to reap his reward, the old man was no better at all. He doffed his hat and beckoned to the old man.

"Sir," said the third son who was a lawyer, "I'll make you another bargain. You have given each of my brothers a chance, and now it is my turn. I'll ask you just one favor, that is all."

"One thing, then," said the devil, though he was growing impatient with these foolish sons.

"You see this candle," said the lawyer, and the devil looked at the candle that burned on the table beside the father's bed. It had burned for many days and was but a nub. 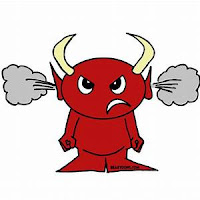 "I pray of you, please let our father live in health just until the candle disappears altogether."

The devil laughed. "A deal," he said, and the father could feel his strength returning, though the candle burned still. The lawyer leaned over the candle and blew out the flame. Then he picked up the candle and put it in his pocket. "That'll be all for you then, devil," said the lawyer, and the devil shrieked with frustration. The lawyer had outsmarted him, and away he went.

The father lived for many more years, enjoying his health and the love of his sons.

Favorite Folktales from around the World
Edited by Jane Yolen