Sirius rises late in the dark, liquid sky
On summer nights, star of stars,
Orion’s Dog they call it, brightest
Of all, but an evil portent, bringing heat
And fevers to suffering humanity.
Homer’s Iliad 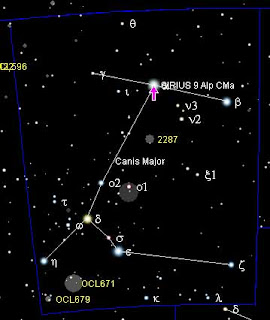 I may have mentioned a time or two that it is hot now.  Hot, humid, dry (I know, sounds weird to use humid and dry in the same sentence but we’ve had no rain for a while now and the ground is cracked and the plants are panting).  Officially we are in the Dog Days.  Doesn’t actually have anything to do with dogs of course.  Has to do with the rising of Sirius, the dog star.

Officially, the Dog Days are 40-days beginning July 3 and ending August 11.  I really wish that means that by August 11, things will begin to cool down.  Well, maybe somewhere but certainly not here in Texas.  We’ll be lucky if it cools down by the end of October!

Just a few odd facts –
Sirius is the brightest star in the sky, other than the sun, of course.
Ancient Greeks and Romans believed Sirius signaled a time when evil was brought to their lands with drought, disease, and discomfort.
And, according to other thoughts and superstitions you can expect:
1 Bad luck, intense heat, abrupt thunderstorms, fevers, flooding, and a generally more ill-tempered population.  (yeah – ok I believe that)
2 Snakes get meaner during Dog Days
3 From the first time you hear the Cicadas sing, the first frost will be six weeks later.  (Ok – I’ve been hearing Cicadas since the first of June – so it will be cooler by – oh yeah, now – hahahahahahaha)
4 All dogs could go mad.
5 Wounds won't heal, they'll just fester and cause pain
6 Put your right sock on first during the Dog Days or you'll fall and break your leg
7 It's easier to get drunk so there are more drunks during this time of year
8 If the cat eats grass during the Dog Days, it's gonna hail hairballs (the demon kitties are not allowed outside, so no eating grass for them)
9 Cars don't drive as good because gasoline gets thick during the Dog Days

I’m sure your wondering why I mentioned the Dog Days.  It’s because it too damn hot to go outside for more then a few minutes.  And, therefore, I’ve been a bit of a slug lately.

Well – not a complete slug.  I do go out in the mornings to walk the neighborhood.  My goal is 1½ miles; two miles if it’s early enough.  By early enough, before 730am.  After 8am, it’s too damn hot.  I have seen some interesting things, like – 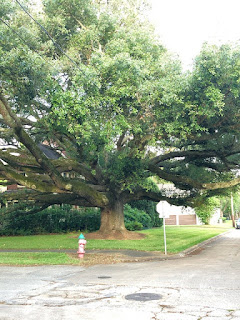 This gorgeous huge Oak Tree.
I keep wondering how I can move
it to my yard without anyone noticing! 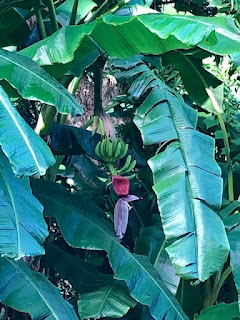 I miss having Banana Trees 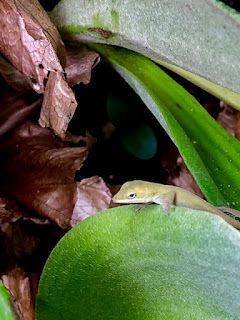 This little guy was crawling
through the Staghorn Fern.
It’s about an inch long.

With it being so hot, I’ve stayed inside and done a lot of reading lately.  One such book is a non-fiction historical type.

It’s about the first Norman Queens –

Matilda of Flanders, wife of William (the Conqueror, the first Norman king).  She was the mother of ten children all of whom survived to adulthood, including two kings, William II and Henry I.  She was queen from 25 Dec 1066 – 2 Nov 1083.

Matilda of Scotland, wife of Henry I (son of William).  She was "a women of exceptional holiness and in her own character exempt from all evil influence."

Empress Maud, daughter of Henry I and England’s first female ruler.  She spent 18 years fighting for the throne during the civil war known as “The Anarchy” 1135-1153.

Eleanor of Aquitaine who was queen consort of Louie VII of France (obtained an annulment) and then queen of England with Henry II (son of Maude and great grandson to William).  She was the mother of  the Plantagenet dynasty.  And, she led more than one revolt against Henry II for control of the throne with result being her imprisonment for 18 years.

It was an interesting book though, I think I’m done with “strictly historical” reading for a while.  The men of those times just irritated the puddin’ right out of me!

The demon kitties are doing well.  They like to watch out the front window. 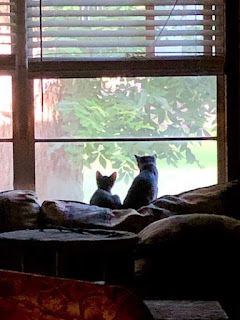 Wahoo!  I finally finished my most recent major sewing project.  I started on it many, many months ago.  Originally, the designer had it all one color.  But since I seldom pay attention to what someone else does, I added some color throughout.  Gold, red, blue, green. 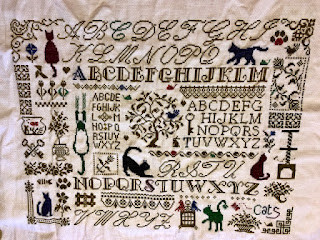 It’s hard to tell but the cats are each a different color and there are small beaded sections throughout. 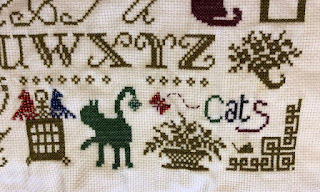 One last thing – I think someone needs to take Mr. Trump’s phone away from him.  How sad, tacky, and unpresidential to publicly tweet about England’s ambassador to the US, Kim Darroch – as "wacky," "incompetent" and a "very stupid guy."  It seems to me that with the resignation of yet another cabinet member, the Trump administration is "inept" and "chaotic."