Here recently I saw an ad for the upcoming 4th Annual Honey Expo in Angleton.  No ideal what would be going on but, it sounded interesting.  Today we went adventuring to Angleton.

You know, I have never been to Angleton before today.

“Angleton, founded in 1890, is the county seat of Brazoria County and is considered part of the greater Houston–The Woodlands–Sugar Land metropolitan area.  It was named for Mrs. George Angle, the wife of the general manager of the Velasco Terminal Railway. (and nowhere did I find anything about her – the wife with only her husband’s name given) Angleton was originally a trade center for agriculture, devoted primarily to cotton, corn, truck farming, and cattle, and later to rice and soybeans. A bitter rivalry emerged between Angleton and the nearby town of Brazoria for the location of the county seat; Angleton was chosen as the seat in 1896 and rechosen by county-wide election in 1913.”

The Honey Expo was held at the county fairgrounds – inside a large building (with AC thank all the gods).  There were tables set up throughout with vendors selling honey and various honey and bee products.  There were several programs scheduled about beekeeping and using honey (unfortunately, it was so noisy, you couldn’t hear the speakers at all). 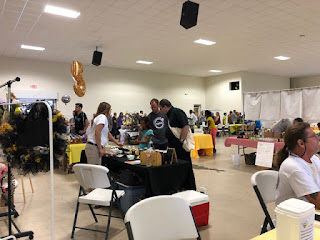 Here’s a couple Did You Know? bee things -

During chillier seasons, worker bees can live for nine months. But in the summer, they rarely last longer than six weeks—they literally work themselves to death.

When aging bees do jobs usually reserved for younger members, their brain stops aging. In fact, their brain ages in reverse.

Honeybees make out faces the same way we do. They take parts—like eyebrows, lips, and ears—and cobble them together to make out the whole face.

One of the first things I saw was this – a sort of “ant farm” for bees.  It’s a teaching tool for children - - - of all ages – I thought it was very cool. 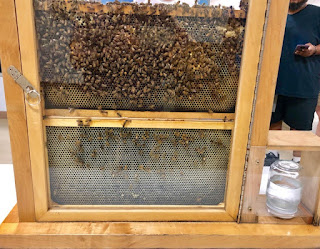 You could buy bee boxes (hives) and swarm collectors. 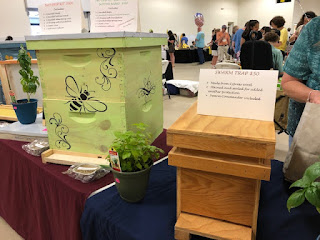 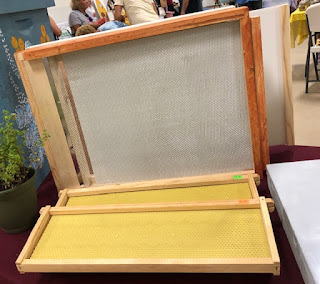 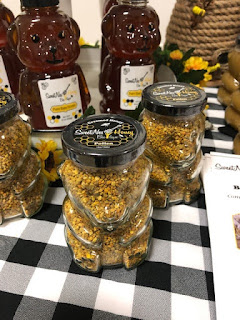 Ok – everyone knows what pollen is – the male seed of flowers.  Honey bees collect the pollen.

And, here’s another odd fact - Bee Pollen can only be synthesized by a worker honey bee. So bee pollen can’t be made in a factory!  And, with all the superfood properties found in bee pollen, there are actually trace elements found in in it that cannot even be identified through modern science.  You know – magic bee stuff. 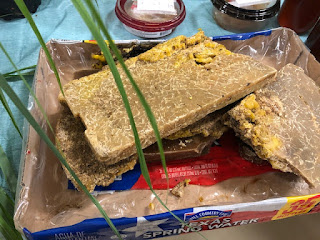 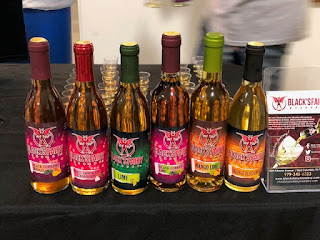 And, of course, Honey 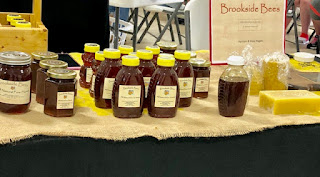 And how, you ask, do they extract the honey?  A very chatty young man gave us all a demonstration.

First you clean the frame of dead bees 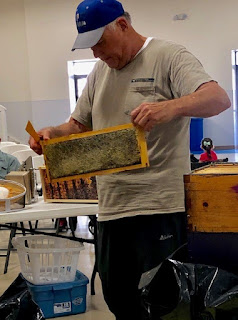 Then you remove the wax capping on each little honey hexagon. 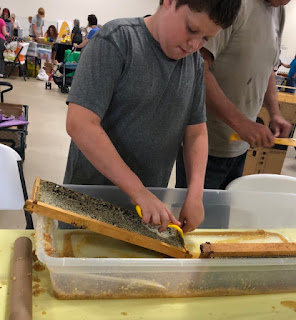 Put the frame into an Extractor 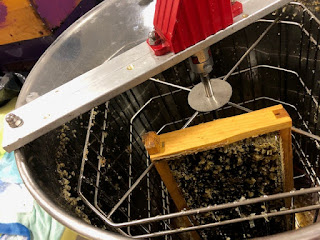 And turn the handle. 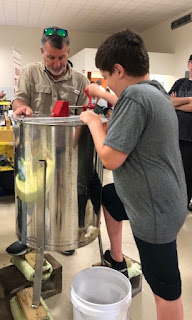 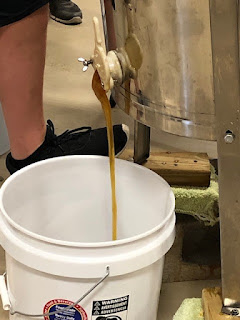 And how cool is that!

Honey never spoils.  It is naturally acidic and low in moisture, making it an inhospitable environment for bacteria.

A typical beehive can produce anywhere from 30 to 100 pounds of honey a year. To produce a single pound of honey, a colony of bees must collect nectar from approximately 2 million flowers and fly over 55,000 miles.

Bees survive the winter by feeding on their honey.

Honey is medicinal and can be traced back to ancient Mesopotamia. Because it is so inhospitable to bacteria, it was often used as a natural bandage to protect cuts and burns from infection.

And finally, when performing a money spell or other ritual of abundance, anoint your candle with honey to represent bounty, industriousness, and sweetness.  When cooking or baking for those you love, include a spoonful of honey with a brief incantation for lasting sweetness toward each other.

If we are going to continue to eat, drink, and be merry in this world, we need bees.